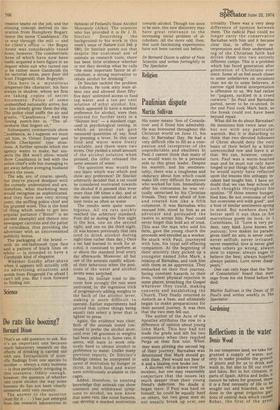 His name means 'Son of Consolation' and it fitted him admirably. He was honoured throughout the Christian world on June 11, his day, St Barnabas' Day. He had a very difficult role to fill as a companion and interpreter of the unpredictable and ebullient St Paul. I cannot think that many of us would want to be a personal aide to this great leader. Despite his warmth, and his sentimentality, there was a toughness and obduracy about him which could make life very difficult for anyone who worked for him. Immediately after his conversion he was virtually ostracised by his Christian friends. They were afraid of him and treated him like a fifth columnist. It was Barnabas who rescued him, stood by him as an advocate and persuaded the twelve to accept him. Paul could never forget that bold act of trust. This was the man who sold his farm, gave the young church the proceeds and enrolled as a worker. He stuck with Paul, journeyed with him, his loyal self-effacing companion. At the beginning of their ministry they picked up a youngster named John Mark, a relative of Barnabas, and took him with them as an apprentice. They embarked on their first journey, facing constant hazards to their lives, violent physical rejection in some places, preaching the Gospel wherever they could, making converts and establishing the Church. They finally returned to Antioch as a base, and ultimately began to make preparations for their second journey. It was then that the two men fell out.

The author of the Acts of the Apostles attributes the row to a difference of opinion about young John Mark. This boy had not made the grade and left his two companions when they reached Perga on their first tour. When they were plotting the second leg of their journey, Barnabas was determined that Mark should go with them. Paul would not hear of it and a blazing row broke out. A discreet veil is drawn over the incident, but one may reasonably conjecture that the issues lay much deeper than their young friend's defection. No doubt it began there. If Paul was hard on himself, he could be equally hard on others, but two great men do not usually break up over one triviality. There was a very deep difference of opinion between them. The radical Paul could no longer carry the conservative Barnabas with him and it became clear that, in effect, their interpretation and their understanding of the Christian faith had driven them into two entirely different camps. This is a problem which has faced generation after generation of Christians ever since. Some of us feel much closer to some unbelievers on occasions than we do to some believers. A narrow rigid literal interpretation is offensive to us. We had rather be "pagans, suckled in a creed outworn." So Paul and Barnabas parted, never to be re-united. In the end Paul took Mark back, so the break could not have been beyond repair.

What did he do about Barnabas? He mentions him twice later on, but not with any particular warmth. But it is disturbing to think that two devoted followers of Christ should deny the very basis of their belief by a bitter unreconciled row and leave it at that. We can, however, conjecture. Paul was a warm-hearted man and he must not only have longed to put things right, but also he would surely have reflected upon the lessons this unhappy incident had taught him. I have no doubt that we can hear echoes of such thoughts throughout his epistles. "If thine enemy hunger, feed him. Be not overcome of evil but overcome evil with good", and a host of similar sentiments spring to mind. But nowhere does he better spell it out than in his marvellous poem on love, in I Corinthians, 13: "Love is very patient, very kind. Love knows no jealousy; love makes no parade; gives itself no airs; is never rude;, never selfish; never irritated; never resentful; love is never glad when others go wrong; always slow to expose; always eager to believe the best; always hopeful; always patient.. Love never disappears."

One can only hope that the 'Son of Consolation' heard that message from his old friend before he died.