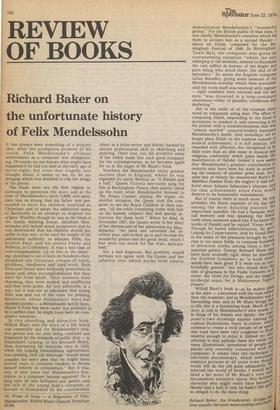 Richard Baker on the unfortunate history of Felix Mendelssohn

It has always been something of a mystery that, after the prodigious promise of his youth, Felix Mendelssohn's ultimate achievement as a composer was disappointing. Of course, no one knows what might have happened if he had not died at the early age of thirty-eight; but even that tragedy was brought about, it seems to me, by an upbringing which was destined to clip the wings of his genius.

The Nazis were not the first regime in Germany to persecute the Jews, and at the time of Mendelssohn's birth (1809) anti-semitism was so strong that his father was persuaded to have his children baptised as Christians and to adopt the additional name of Bartholdy in an attempt to disguise his origins. Wealthy though he was as the head of the family banking house, Abraham Mendelssohn still lacked social acceptance and he was determined that his children should not suffer in this way; so he used the weight of his patriarchal authority to educate Felix, his brother Paul, and his sisters Fanny and Rebecca, in Conformity. It was a bad case of over-compensation. Up at rive in the morningstretched to six o'clock on Sundays–they absorbed the Victorian virtues of truth, goodness, obedience and hard work. Both Felix and Fanny were brilliantly precocious in music and other accomplishments but they were far from spoilt. Their manners were charming, they were modest and unaffected and they were polite. All very admirable, in a way; but it was not so admirable that young Felix was sent out of the room for praising Beethoven, whose disrespectful ways, had shocked Goethe — a Mendelssohn family hero. Maybe if Felix has been under less pressure to be a perfect man, he might have been an even greater musician.

In this absorbing and attractive book, Wilfrid Blunt tells the story of a life which was essentially sad, for Mendelssohn's creative genius was for ever being confused and frustrated by the demands of public duty – in Dilsseldorf, Leipzig, or his detested Berlin. How depressing for instance, that in 1835, when the Leipzig Gewandhaus appointment was pending, rich old Abraham "would never consider his son's plea that he might have several years of complete freedom to devote himself entirely to composition." But it was only in later years that Mendelssohn's frustration as a composer became apparent: for a long time all was brilliance and gaiety, and the tale of the young man's conquest of Europe is illuminated by his considerable On Wings of Song. – A Biography of Felix Mendelssohn. Wilfrid Blunt (Hamish Hamilton £5.50) talent as a letter-writer and diarist, backed by almost professional skill in sketching and painting. There was, too, his inventive sense of fun which made him such good company for his contemporaries, as he becomes again for us in the pages of Mr Blunt's book.

Nowhere did Mendelssohn enjoy greater success than in England, where he was regarded (to quote Berlioz) as "A Handel and a half." Queen Victoria nervously sang for him at Buckingham Palace, then quietly tidied up the room while Mendelssohn listened to The Prince Consort playing the organ; on another occasion, the Queen took the composer to see the Royal Children in their nursery, "all the while comparing notes with him on the homely subjects that had special attraction for them both." When he died, in November 1847, the Queen wrote in her diary of her distress and of her admiration for Mendelssohn: "we liked and esteemed the excellent man, and looked up to and revered the wonderful genius and the great mind, which I fear were too much for the frail, delicate body."

Not a bad diagnosis. But posterity would perhaps not agree with the Queen and her subjects over which works most clearly demonstrated Mendelssohn's "wonderful genius." For the British public of that time, it was chiefly Mendelssohn's oratorios which led them to acclaim him as a second Handel – above all Elijah, composed for the Birmingham Festival of 1846. In Birmingham Town Hall, the composer was given an overwhelming reception "whilst the sun, emerging at the moment, seemed to illuminate the vast edifice in honour of the bright and pure being who stood there, the idol of all beholders." So wrote the English composer Julius Benedict, giving some measure of the Mendelssohn-worship which then prevailed. And the work itself was received with rapture – eight numbers were encored and the last note "was drowned in a long-continued unanimous volley of plaudits, vociferous and deafening."

But in the midst of all the triumph there stood an exhausted, ailing man. The effort of composing Elijah, responding to the flood of invitations to conduct it, and correcting it for the printer with a conscientiousness that was "almost morbid" unquestionably hastened Mendelssohn's death. And nowadays we no longer place Elijah on the topmost summit 91 musical achievement; it is still popular, still regarded with affection, but recognised to be little more than an able essay in musical and religious conformity which pales beside the masterpieces of Handel. Indeed it now seems that Mendelssohn's greatest contribution t° oratorio may have been his work in promoting the memory of another great man. As a mere boy of twenty he resurrected Bach's St Matthew Passion from the neglect it had suf' fered since Johann Sebastian'S lifetime, and for that achievement alone Felix would deserve to be honourably remembered. But of course there is much more. He was probably the finest organist of his day a.,11", among the most dazzling pianists. tle improvised superbly. He had a fantastic mua," ical memory and was speaking the literal truth when someone asked him if he knew thie„ works of Handel and he replied "Every note. Though he hated administration, he gave Leipzig its Conservatorie. And he found dine, in the midst of the pressures brought by sq., cess in too many fields, to compose hundrew, of attractive works, among them a few 0' supreme genius. George Bernard Shaw nlaYil have been wickedly right when he describ.e, the Scottish Symphony as "a work whic" would have been great if it were not so col': foundedly genteel," but who would deny ti``

title of greatness to the Violin Concerto ifl minor, the Octet for Strings, and the maglca,s incidental music for A Midsummer Night Dream? Wilfrid Blunt's book is–as he makes Plaill,. at the start — concerned with the man rattle; than the musician; and as Mendelssohn was., fascinating man, and as Mr Blunt brings hl,"'e to life, this is a fascinating book. Much of story is told in Mendelssohn's own words, t", in those of his friends and family; the 0111,4 poser's own drawings appear among t."cb copious illustrations, many in colour, whith combine to create a vivid picture of an eP°,e that must have been very congenial to tho "_i, wealthy enough to enjoy it. Indeed my 0,:0 criticism is that perhaps there are rather 1•_vd many illustrations, sometimes of peopleiti‘1,e, places only remotely connected with t"of composer; it seems that the techniqu.e .5 television documentary, which sometirl_`h employs pictures at all costs even thotLba's words will do the job quite adequatelY, infected the world of books. I would had liked a bit more of Mr Blunt's very documented narrative about thisbriflt character who might really have beconw.,te Handel and a half, if only he hadn't felt (11-11 so obliged to do the done thing.

Richard Baker, the broadcaster, divides..sic, time equally between news-casting and 11"4