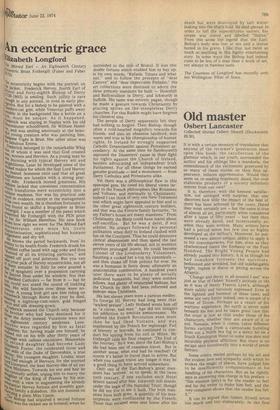 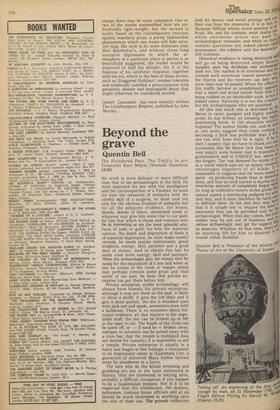 It is with a certain measure of trepidation that anyone of the reviewer's generation must open this book; the recollection of the glamour which, in our youth, surrounded the author and his siblings like a mandorla, the remembrance of the excitement generated by so • many of these stories on their first appearance, induces apprehension. Would they seem on re-reading hopelessly dated, the over elaborate products of a society infinitely remote from our own?

It is, therefore, with the keenest satisfaction, not untinged with surprise, that one discovers how little the impact of the best of them has been softened by the years. Dated they most certainly are but the same is true of almost all art, particularly when considered after a lapse of fifty years but then they were already dated, and intentionally so, when they were written. Many writers have had a period sense but few one so highly developed as the author's. Moreover, he possessed a rare, almost unique, ability to apply it to his contemporaries. For him, even as they charlestoned round the Embassy or the Four Hundred, The Bright Young People had already passed into history; it is as though he had somehow foreseen the survivors, bedizoned and wrinkled, but stil indefatigably bright, topless in discos or jetting across the Atlantic.

"Change and decay in all around I see" was just as true of Osbert Sitwell's attitude to life as it was of Henry Francis Lyte's, although more subtly and variously expressed. Even in the lightest and funniest of these tales, and some are very funny Indeed, one is aware of a sense of Doom. Perhaps as a result of his wartime experience, the earth is never solid beneath his feet and he takes great care that the crust is just as thin under those of his characters, whether they are aware of it or not. Nemesis, when It comes, takes different forms varying from a cannonade, bursting from out a North Sea fog or a direct hit on a South Kensington Hotel to some macabre and incurable physical affliction. But there is no escape save occasionally into a world of senile fantasy.

Some critics, misled perhaps by his wit and the evident love and sympathy with which he evokes the magic of places, have judged him to be insufficiently compassionate in his handling of his characters. But as he rightly says in answering this charge in his preface "this emotion (pity) is for the reader to feel and for the writer to make him feel; and the very complaint shows that the reader has felt It can be argued that Osbert Sitwell wrote too much and too elaborately. In the first charge there may be some substance. One or two of the stories reassembled here are undoubtedly light-weight, but the second is surely based on the contemporary reaction against mandarin prose, a purely fashionable phenomenon which one trusts will fade away 'ere long. His style is no more elaborate than Max Beerbohm's, and without those long evocative digressions in which the atmosphere of a particular place or period is so beautifully suggested, the reader would be deprived of half his delight; for it is the fineness of his aesthetic response, together with his wit, which in the best of these stories, such as 'Staggered Holidays', renders tolerable and artistically justified a preoccupation with geriatrics, disease and inescapable decay that might otherwise be considered morbid.

Osbert Lancaster has most recently written The Littlehampton Bequest, published by John Murray.