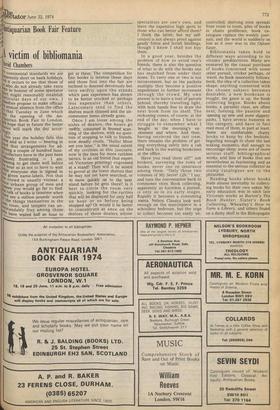 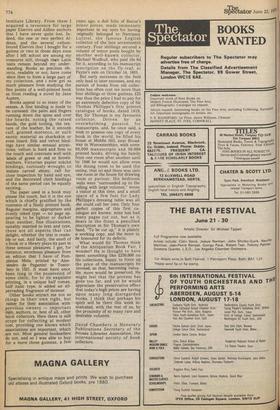 5Y continental standards we are !Parently short on bank holidays, "I'd it occurs to me that those of Who do not already take extra Ys in honour of some spectator 1)cirt might reasonably establish tly,rticular days of our own. I 4;lerefore propose to make official

annual absence from the office

that Tuesday in June which tieS the opening of the AnclIlarian Book Fair in London, hope that in future the better rularies will mark the day accor

year the holiday fails. this ke,ek and as I write — bearing in r4.1nci that arrangements for advitting a couple of hundred Sana c.ollectors have in the past been lously frustrating — I ami 44,4ing to get there well before hi our so as not to have to wait orlfl everyone else is signed in jtni'l given name-labels. Not that tiloe crowd is usually violent: a Ipr,re urbane group of men and ILTIen you would go far to find. talk of books is tiresome when prete are a million pounds' worth the things themselves in the tii^t room, and tempers can unstandably fray among those qo have waited half an hour to get at them. The competition for fine books is intense these days and those first into the fair are inclined to descend decorously but very swiftly upon the stands which past experience has shown to be better stocked or perhaps less expensive than others. Latecomers tend to find the shelves much thinned and the uncommoner items already gone.

Once I am loose among the aisles of dealers, the hours go ,swiftly, consumed in fevered scanning of the shelves, with no question of stopping to talk to friends, now deadly rivals. "Hullo! Must see you later," is the usual extent of my civilities at this juncture; now is the time for more ruthless tactics. Is an old friend (but expert on Victorian printing) engrossed at a stand? Then will it be wisest to grovel at the lower shelves that he may not yet have searched, or to move quickly on to the next stand before he gets there? Is it best to circle the room very quickly, looking for the rarities that will be displayed for only half an hour or so before being snapped up? Or would it be better to concentrate at once on the shelves of those dealers whose specialities are one's own, and leave the expensive high spots to those who can better afford them? I think the latter, but my' selfcontrol is not always proof against gaudy folios and lavish bindings, though I know I shall not buy them.

In a good year, besides the problem of how to avoid one's friends, there is also the question of what to do with the books one has snatched from under their noses. To carry one or two is not inconvenient, but as the packets multiply they become a positive impediment to further movement through the crowd. My own answer is to leave a trail of parcels behind, thereby travelling light, with both hands free to draw the next book from its shelf. The reckoning comes, of course, at the end of the day, when I have to struggle to remember what I bought in the morning's excitement and where. And then, having retrieved the last item, there remains the problem of getting everything safely into a cab and back to the waiting bookcases at the office.

Have you read them all?" ask brokers, surveying the rows of books, never one on insurance among them. Only those two volumes of My Secret Life," I say, and turn the conversation back to commoner vices. Book collecting, apparently so harmless a pursuit, is only so in its early stages. Rapidly it becomes a consuming mania. Nelson Classics look well enough on the mantlepiece in a schoolboy bedroom, but the urge to collect becomes too easily un

controlled, shelving soon spreads from room to room, piles of books in chairs proliferate, book catalogues replace the weekly journals, and the world is suddenly as lost as it ever was to the Opium Eater.

Bibliomania takes hold in different ways according to its victims' predilections. Many are ensnared by the casual purchase of books concerned with some other pursuit, cricket perhaps, or travel. As book innocently follows book, the idea of a collection takes shape, anything connected with the chosen subject becomes desirable, a new bookcase is bought: the game is up, the book collecting begun. Books about books, a parasitic class, are often next, fanning the passion and opening up new and more slippery paths. I have several hundred in this category, and have in fact read most of them, in part at least. Some are comfortable, chatty books to keep by the bedside, beguiling enough to cheer the last waking moments, dull enough to encourage sleep; some are of more serious stuff, bibliographical works, arid lists of books that are nevertheless as fascinating and as essential to the serious collector as stamp catalogues are to the philatelist.

Reading books about books leads almost inevitably to collecting books for their own sakes. My early education was in such late Victorian works as Burton's The Book Hunter, Slater's Book Collecting, Wheatley's How to Form a Library, and others found on a dusty shelf in the Bishopsgate Institute Library. From them I acquired a reverence for large paper Elsevirs and Aldine anchors that I have never quite lost. Indeed, the one or two perfect Aldines, and the several vellumbound Elsevirs that I bought for a guinea or two in those days soon after I left school are among my treasures still, though their Latin texts remain beyond my understanding. Books as precious objects, readable or not, have come since then to form a large part of my collection, and I now get as much pleasure from studying the fine points of a well-printed book as from reading a novel by Jane Austen.

Books appeal to so many of the senses. A fine binding is made to be caressed: the palm and fingers running down the spine and over the boards, noting the raised bands, the gold tooling, the texture of the leather, be it smooth calf, grained morocco, or such exotic material as sharkskin or even lizard. Silk and velvet bindings have similar sensual attractions, vellum is hard and firm to the touch and contrasts well with labels of green or red or brown leathers. Victorian papier mache bindings, curiously wrought to imitate carved ebony, call for close inspection by hand and eye, and the decorated cloth bindings of the same period can be equally exciting.

The paper used in a book may please the touch, but it is the eye which is chiefly gratified by the contents of a finely printed book. Regular margins, appropriate and evenly inked type — no page appearing to be lighter or darker than another, fine illustrations, suitably married to text and type, these are all aspects that can delight, whether the text is readable or not. And lastly, the smell of a book or a library plays its part in these sensual pleasures. I get, for instance, enormous pleasure from an edition that I have of Pornponius Mela, printed by Alessandro de Paganini in Toscolano in 1521. It must have once been long in the possession of some cleric, for to its exquisite printing, in a unique half roman, half italic type, is added an allpervading fragrance of incense.

Other books attract me not as things in their own right, but rather for their association with previous owners — important men, authors, or, best of all, other book collectors. Here there is still scope for collecting at modest cost, providing one knows which associations are important, which , are not. Most general booksellers do not, and so I was able to buy for a mere three guineas, a few

years ago, a dull folio of Bacon's minor pieces, made immensely important in my eyes for having originally belonged to Narcissus Luttrel, the famous English collector of the late seventeenth century. Four shillings secured a volume of minor poets bought by another well-known collector, Michael Wodhull, who paid lOs 6d for it, according to his manuscript inscription on the fly-leaf, at Payne's sale on October 14, 1803.

But early successes in the field only lead to later excesses, and my pursuit of books from old collections has often cost me more than four shillings or three guineas. £25 was thus the price I had to pay for an extremely defective copy of Sir Thomas Phillipps's first printed catalogue of books, dated 1819. But Sir Thomas is my favourite collector. Driven by an overwhelming passion for manuscripts, and, he once said, a wish to possess one copy of every book in the world, he filled his house at Middle Hill, near Broadway in WorcesterShire, with some 60,000 manuscripts and 50,000 printed books, driving his family from one room after another until by 1846 he would not allow even the dining room to be used (for eating, that is) and there was only one room in the house for drawing room or parlour. His bedroom walls were "surrounded up to the ceiling with large volumes," wrote a visitor at this time, and a small space of a few feet for Lady Phillipps's dressing table was all she could call her own. Only four ,perfect copies of this first ca,talogue are known: mine has had. many pages cut out, but as it; bears in the front a pencilled. ;inscription in Sir Thomas's own. 'hand, "To be cut up," it is plainly. la working copy, and the more to, be honoured for its defects.

What would Sir Thomas think of the Antiquarian Book Fair, I wonder? He is thought to have spent something like £250,000 on his collections, happy to force up the price of the manuscripts he coveted, so that, becoming valuable, more would be preserved. He might feel that the process has gone too far, and yet he would appreciate the preservative effect that today's high prices are having upon many long disregarded books. I think that perhaps his spirit will be there this week intoxicated, with the rest of us, by the proximity of so many rare and desirable volumes.