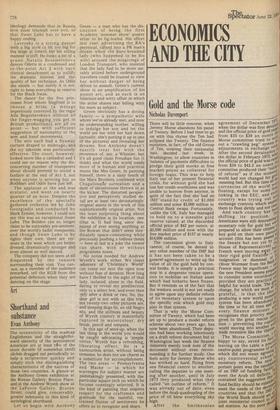 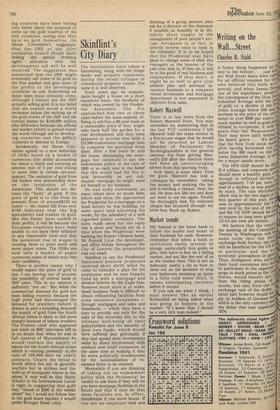 Gold and the Morse code

There will be little remorse, when ,Jeremy Morse abandons his panel of Twenty. Before I had time to go on with this rhyme the Ten had eclipsed the Twenty. The finance ministers, in fact, of the old Group of Ten, wearing their nationalist hats, decided last week, in Washington, to allow countries in balance of payments difficulties to pledge their gold stocks at free market prices as collateral for foreign loans. This was to help Italy out of her present financial crisis, for without gold she had lost her credit-worthiness and was unable to borrow from anyone, in spite of the fact that she had an IMF'stand-by credit of $1,000 million and some $3,000 million in Central Bank swaps. Fortunately, unlike the UK, Italy has managed to hold on to a sizeable gold reserve valued, at the discarded official price of $42 per ounce, at $3,500 million and now with the free market price of $157 at nearly $14,000 million.

The concession given to Italy cannot, of course, be denied to any other member of the IMF but it has not been taken to be a general agreement to write up the value of all the gold held by central banks. It is simply a practical step in a desperate rescue operation to mobilise an Italian asset which had hitherto been frozen. But it reminds us of the fact that the western world is not yet ready to agree upon any definite reform of its monetary system or upon the specific role which gold may play in that system.

That is why the Morse Committee of Twenty, which had been set up to produce a model reform scheme about two years ago, has now been abandoned. Their deputies had been working laboriously on a draft reform document but at Washington last week the finance Ministers merely took note of the document without even recommending it for further study. One feels sorry for Jeremy Morse who has worked so hard, flying from one financial centre to another, calling the deputies to one meeting after another, until in July 1973 they produced what they called "an outline of reform." It was already out of date, even before the Arab quadrupling of the price of oil blew everything sky high.

agreement of December 19/1e'd when the dollar was first devaltij and the official price of gold rate from $35 to $38 an ounce tl:y Morse committee tried to WT„r out a "crawling peg" system adjustments in exchange rate.f After the second devaluatiotift the dollar in February 1973, vi,11`;(1 the official price of gold was raishe from $38 to $42.2 an ounce committee produced their "uutillic of reform" as if the monetaotci world had not changed for ,g,°,he meaning bad. But this time ao:,e currencies of the world floating, except for some linking in the EEC, and evep'r country was trying out bled exchange controls which enali4 them to float dirtily and not cle'ep And each country has bletie shifting its position ,„gi Americans were still denoune'p're monetary role for gold bUt ig'to prepared to allow their cit1zen50 buy gold on their own Per!,°1V account (this has been passeuet,e the Senate but not yet IVite House of Representatives).,00 French were moving aviaY 'roe their rigid gold fixatidn resignation or dismissal o'le of Oliver Wormser from the Ballood France may be significantre4 the new President seems prePa,es to consider some unorthod(1,4 provided they are practicaldre0 helpful for world trade. The ill tre, change, for which we must 3,, 01 grateful, is that the ide"e0 producing a new world trolled 101 system has been abandone to the time or for all time allcipo' every finance minister tot recognises that priority 'perr given to the great rescue

tion – preventing the caP0r0 world moving into another r1e5, trade recession like the '00

The 'Morse Committee, happy to say, saved its face,c01 leaving on the table a Pr,.afctio twelve-point programme or a 0 ti which did not mean agreeiV any controversial schel monetary reform. The 111,°,5•.,00, portant point was the estanl!',„tv of an IMF oil funding facilIV meet the Arab oil deficits. tO contained the suggestion tb,,a, fund facility should be extellropOi meet the needs of the dev,,,ef. countries and that the Iv", the World Bank should 0'50 joint ministerial counciltoolor aid matters. As the poor de

ing countries have been feeling very bitter about the proposal to write up the gold reserves of the rich countries, seeing that they have no gold themselves, the Morse Committee's suggestion that the IMF or the joint ministerial council should study linking the special drawing rights allocation with the development aid will be well received. The suggestion was mentioned that the IMF might eventually sell some of its gold on the free market and give some of the profits to the developing countries as aid. Something on these lines must certainly come, although I cannot see the IMF actually selling gold. It is my belief that we cannot avoid a world recession unless the writing up of the gold stocks of the IMF and the central banks by $140,000 million (the difference between the official and market prices) is spread round the world through aid to developing countries and the deficit countries in distress in Europe.

Incidentally, the Morse Committee agreed on a new definition of SDRs based on a basket of currencies (the dollar accounting for about a third) and carrying an interest rate of 5 per cent (rising to some limit in certain circumstances). The omission of gold from the basket was presumably done on the insistence of the Americans. This should not distress the "bulls" of gold. If the price of gold is to rise from its present floor of around$155 an ounce — the recent fall from over $180 indicates that the big speculators and traders in gold, like Jim Slater, have cashed in their profits, it will be because the European countries have been unable to cut back their inflation to any reasonable level and that the persistent rise in wages is causing them to print more and more paper notes. The SDRs are now only a basket of paper currencies some of which may lose their credibility.

There is another reason why I would expect the price of gold to rise. I am leaving out of account the possibility of central bank or IMF sales. This in my opinion is definitely "not on." But while the commercial demand for gold has been falling recently because the high price had discouraged the demand for jewellery (which is always in part a hoarding demand) the supply of gold from the South African mines is likely to fall more sharply because of labour troubles. The Frelimo chief who appeared last week on BBC television left us in no doubt that when he was in full control of Mozambique he would restrain the supply of labour for the South African mines which is running presently at the rate of 100,000 men on yearly contracts. Clearly the threat to South Africa lies not in guerrilla warfare but in strikes and the hold-up of immigrant labour in the mines. It may well be that Harry Schultz in his International Letter is right in suggesting that gold may "smash to $200 in the weeks ahead" but I would not follow him in the gold share market. I would prefer Kreuger Rand coins.