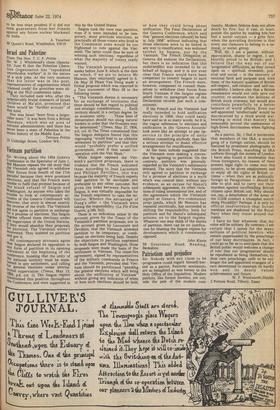 Sir: Nobody with any claim to be 'progressive, could regard himself/herself as a patriot. Patriotic sentiment:, are as benighted as was heresy to the Holy Office of the Inquisition. Modern patriots, like former heretics, are outside the pale of the modern corn

munity. Modern fashion does not allow death by fire; but it can, at least, punish the patriot by making him/her feel a social outcast — a grim fate, when the prevailing doctrine is that every one clamours to belong to a national, or social, group.

'Well, Sir, I am a patriot, without equivocation, shame or regret. I am heartily proud to be British; and I believe that the way out of our 'progressive' difficulties, as they crowd upon us — spiritual, economic, political and social — is the recovery of national faith and purpose and, with them, of the historic qualities of British self-respect, self-reliance and self-responsibility. 1 believe also that a British renaissance would not only save our country; re-animate the millions of British stock overseas; but would also contribute powerfully to a better balance of world affairs. Even our self-appointed 'intellectuals' would be disconcerted by a third world war, bearing in mind that history has inexorably proved the uselessness of high-flown doctrinaires when fighting starts.

As a patriot, Sir, I find it intolerable that members of the IRA, a murder gang of a foreign nation, should be featured by prominent photographs in the British Press, marching in IRA uniform through the streets of London. I have also found it intolerable that these foreigners, by reason of their present legal right to come into this country, to be given employment and to enjoy all the rights of British citizens — when they are as politically foreign as Patagonians — should be able to plot and to carry out their murders against unoffending British citizens upon British soil. Why should not, say, a detachnient of the Army of the U3SR conduct a triumphal march along Piccadilly? Perhaps it is only by official inadvertence that Soviet warships are shadowed by the Royal Navy when they cruise around our coasts.

I have no fear whatever that my voice will be solitary. By contrary, I am certain that I speak for the many millions of political heretics who remain unpersuaded by the preachings of our busy doctrinaires. In fact, I could go so far as to anticipate that the British public would welcome a change of role: that our 'progressives' should be repudiated as being themselves, by their own preachings, unfit to be any longer the self-appointed evangels of a race determined to maintain its hardly won and its dearly valued achievements and future.