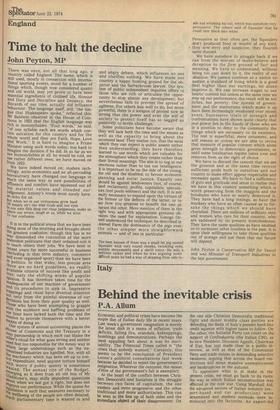 Time to halt the decline

There was once, not all that long ago, a country called England. The name, which is Still used, mostly in connection with international sporting events, stood for a number of things which, though now considered quaint and old world, may yet prove to have been essential ingredients of civilised life. Honour and Duty and Discipline and Decency, the discards of our time, actually did influence behaviour. The language itself, still "the tongue that Shakespeare spoke," reflected this. Mr Baldwin observed in the House of Commons in 1923 that the English language was rich in monosyllables. "Four words," he said, "of one syllable each are words which contain salvation for this country and for the Whole world and they are Faith, Hope, Love and Work." It is hard to imagine a Prime Minister using such words today; less hard to hnagine the derision if he did. In so far as we use monosyllables at all, he would be told, we use rather different ones; we have moved on from 1923.

We have indeed moved on; modern technology, socio-economics and an all-pervading bureaucracy have changed our language in rnuch the same way as new possibilities of affluence and comfort have squeezed out all but material values and clouded our judgement. Antony's words must surely have an echo for us.

Rut when we in our viciousness grow hard

9h misery on't the wise Gods seal our eyes th our own filth drop our clear judgments, make us Adore our errors; laugh at us, while we strut To our confusion.

It is in the political arena that we have been doing most of the strutting and brought about the greatest contusion; though this has in no Y'ay diminished the conviction of the more innnodest politicans that their ordained role is to teach others their jobs. We have been in ,recent years far more successful in business (including in that term industry, commerce arid even organised sport) than we have been in Politics. In that wider, less precise area there are no hard guidelines, no readily rvailable criteria of success like profit and c's,s; only the shifting winds of popular 9Plnion. It has therefore taken time for the inadequacies of our machine of government and its procedures to sink in. Impressive trappings and ritual have diverted attention rt. only from the painful slowness of our e,eisions but from their poor quality as well. 'nose who have been attempting to grapple With the stubborn and baffling problems of c'ur hour have lacked both the time and the resolve to provide themselves with a better "leans of doing so. 4iOur system of annual accounting places the ,.,°1-1se of Commons and the Treasury in a COS partnership in which each can blame the other's ritual for what goes wrong and neither neLed feel too responsible for the messy way in t7nIch large undertakings such as the nati3Onalised industries are handled. Nor, with all Li Machinery which has been set up to conw9t expenditure, need anyone torture himself with worry if public money is sometimes e asted. The annual rite of the Budget, erging as it does from an old box of Mr al3acIstone's, may stifle impudent questions ir„cint when we last got it right, but does not 10?rove our performance. While the queue for thglslation is such that measures necessary to rtie Wellbeing of the people are often delayed, kich parliamentary time is wasted in arid

and angry debate, which influences no one and clarifies nothing. We have made our country a happy hunting ground for the objector and the barrackroom lawyer. Our system of public independent inquiries offers to those who are rich or articulate the opportunity to stop almost any development; but nevertheless fails to prevent the spread of ugliness. For others less well to do, but more powerful, there is a weapon of protest now so strong that the power and even the will of society to protect itself has so sagged as positively to invite challenge.

Some politicians have become aware that they will lack both the time and the means as well as the capacity to bring about the promised land. They realise, too, that the most which they can expect is public assent rather than understanding; they have therefore learned to use words which are valuable for the atmosphere which they create rather than 'their literal meanings. The aim is to tug at our emotions rather than to tax our intelligence. It is important to be on the side of the young, the old and the disabled; to favour economic planning and social justice. Equally one should be against landowners (not, of course, land reclaimers), profits, capitalists, speculators (not pools winners) and the rich. It is not really necessary to expand upon the virtues of the former or the defects of the latter; or to say how you propose to benefit the one or harass the other. Mere mention of them in the right way and with appropriate gestures obviates the need for explanation. George Orwell understood the technique; he described in Animal Farm the dominance of the pigs over, the other simpler more straighforward animals — and of one in particular:

The best known of them was a small fat pig named Squealer with very round cheeks, twinkling eyes, nimble movements and a shrill voice. He was a brilliant talker and when he was arguing some difficult point he had a way of skipping from side to •

side and whisking his tail, which was somehow very persuasive. The others said of Squealer that he could turn black into white.

Persuasive as they often are, the Squealers don't produced food or wealth of any kind; • they sow envy and suspicion; they flourish upon discord.

We have somehow to struggle back if we can from the morass of make-believe and deception to the firm ground of fact and meaning. We have to understand, without being too cast down by it, the reality of our situation. We cannot continue as a nation to, sustain a standard of living which is a good deal higher than our earnings, let alone improve it. We can increase wages to our hearts' content but unless at the same time we step up our performance, the result will be not riches, but poverty. Our system of government and the institutions which make it up have been increasingly weakened over recent years. Successive trials of strength and confrontations have shown quite clearly that real power lies in the hands of those who are in a position to deny to the community the things which are necessary to its existence. The rest is superfidial, mere ornament, and will remain so unless we are able to revive that measure of popular consent which alone gives strength to democratic government, or until some totalitarian regime takes over and removes from us the right of choice.

We have to discard the conceit that we are the greatest and at the same time recover sufficient pride both in ourselves and our country to make effort appear respectable and necessary again. We have to find a sufficiency of guts and gratitude and sense to realise that we have in this country something which is worth preserving from the maggots and the hoodlums who have so nearly destroyed it. They have had a long innings, as have the mockers who have so often caused us to forsake the things which we should have cherished. There are millions of ordinary men and women who care for their country, who are saddened by its present wretchedness. They have the same qualities as have enabled us to surmount other troubles in the past. It is upon their willingness to take those qualities out of storage and use them that our future will depend.

John Peyton is Conservative MP for Yeovil und was Minister of Transport Industries in the last government.