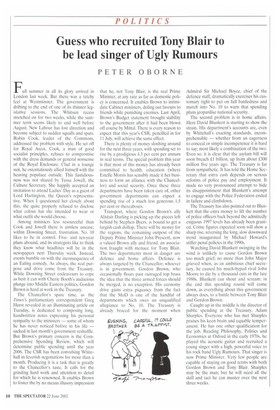 FWI summer in all its glory arrived in London last week. But there was a tetchy feel at Westminster. The government is drifting to the end of one of its thinner legislative sessions. The Whitsun recess stretched on for two weeks, while the summer term seems likely to end well before August. New Labour has lost direction and become subject to sudden squalls and spats. Robin Cook, leader of the Commons, addressed the problem with style. He set off for Royal Ascot. Cook, a man of good socialist principles, refuses to compromise with the dress demands or general nonsense of the Royal Enclosure. Clad in a lounge suit, he ostentatiously allied himself with the heaving populace outside. This fastidiousness was not shared by Tessa Jowell, the Culture Secretary. She happily accepted an invitation to attend Ladies' Day as a guest of Lord Hartington. the Queen's representative. When I questioned her closely about this, she quite properly refused to disclose what colour hat she intended to wear or what outfit she would choose.

Among ministers less resourceful than Cook and Jowell there is aimless unease; within Downing Street, frustration. No. 10 likes to be in control. Fiveand ten-year plans abound, and its strategists like to think they know what headlines will be in the newspapers next Thursday week. Instead, events bumble on with the inconsequence of an Ealing comedy. As always, the real purpose and drive come from the Treasury. While Downing Street endeavours to cope as best it can with Cherie Booth's audacious plunge into Middle Eastern politics, Gordon Brown is hard at work in the Treasury.

The Chancellor's spare time, as the Times's parliamentary correspondent Greg Hurst revealed in an illuminating article on Tuesday, is dedicated to composing long, handwritten notes expressing his personal sympathy to the ministers — some of whom he has never noticed before in his life — sacked in last month's government reshuffle. But Brown's primary concern is the Comprehensive Spending Review, which will determine public spending until the year 2006. The CSR has been convulsing Whitehall in feverish negotiations for more than a month. Producing it is a task that is greatly to the Chancellor's taste. It calls for the grinding hard work and attention to detail for which he is renowned. It enables Brown to foster the by no means illusory impression that he, not Tony Blair, is the real Prime Minister, at any rate as far as domestic policy is concerned. It enables Brown to intimidate Cabinet ministers, doling out favours to friends while punishing enemies. Last April, Brown's Budget statement brought stability to the government after it had been blown off course by Mittal. There is every reason to expect that this year's CSR, pencilled in for 11 July, will achieve the same effect.

There is plenty of money sloshing around for the next three years, with spending set to rise by a prodigious 4.3 per cent per annum in real terms. The special problem this year is that most of this money has already been committed to health, education (where Estelle Morris has sensibly made it her business to form an alliance with the Chancellor) and social security. Once these three departments have been taken care of, other government departments can expect a spending rise of a much less generous 1.5 per cent or thereabouts.

Transport, where Gordon Brown's ally Alistair Darling is picking up the pieces left behind by Stephen Byers, is bound to get a largish cash dollop. There will be money for the regions, the remaining outpost of the Deputy Prime Minister John Prescott, now a valued Brown ally and friend, an association fraught with menace for Tony Blair. The two departments most in danger are defence and home affairs. Defence is always targeted by the Chancellor, whoever is in government. Gordon Brown, who occasionally floats past outraged top brass the idea that the three armed forces should be merged, is no exception. His economy drive gains extra piquancy from the fact that the MoD is one of the handful of departments which owes an unqualified allegiance to No. 10. The Treasury is already braced for the moment when Admiral Sir Michael Boyce, chief of the defence staff, dramatically exercises his customary right to put on full battledress and march into No. 10 to warn that spending plans jeopardise national security.

The second problem is in home affairs. Here David Blunkett is starting to show the strain. His department's accounts are, even by Whitehall's exacting standards, incomprehensible — whether from an eagerness to conceal or simple incompetence it is hard to say; most likely a combination of the two. Even so, it is clear that the asylum bill will soon breach £1 billion, up from about £300 million five years ago. The Treasury is far from sympathetic. It has told the Home Secretary that extra cash depends on serious reforms of police pay and employment. It made no very pronounced attempt to hide its disappointment that Blunkett's attempt to engage with the Police Federation ended in failure and climbdown.

The Treasury has also pointed out to Blunkett that the extra money to lift the number of police officers back beyond the admittedly exiguous 1997 levels has already been granted. Crime figures expected soon will show a sharp rise, reversing the long, slow downward trend inaugurated by Michael Howard's stiffer penal policies in the 1990s.

Watching David Blunkett swinging in the wind is unlikely to cause Gordon Brown too much grief; no more than John Major grieved when, as an ambitious chief secretary, he caused his much-hyped rival John Moore to die by a thousand cuts in the late 1980s. Blunkett can shout and scream; in the end this spending round will come down, as everything about this government always does, to a battle between Tony Blair and Gordon Brown.

Caught up in the middle is the director of public spending at the Treasury, Adam Sharpies. Everyone who has met Sharpies praises his keen brain and equable temperament. He has one other qualification for the job. Reading Philosophy, Politics and Economics at Oxford in the early 1970s, he played the acoustic guitar and recruited a young singer with a high, powerful voice to his rock band Ugly Rumours. That singer is now Prime Minister. Very few people are capable of staying on good terms with both Gordon Brown and Tony Blair. Sharpies may be the man; but he will need all the skill and tact he can muster over the next three weeks.