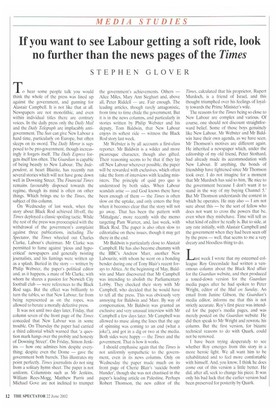 Page 12, 22 June 2002 — If you want to see Labour getting a soft ride, look no further than the news pages of the Times
Close

If you want to see Labour getting a soft ride, look no further than the news pages of the Times

To hear some people talk you would think the whole of the press was lined up against the government, and gunning for Alastair Campbell. It is not like that at all. Newspapers are not monolithic, and even within individual titles there are contrary voices. In the daily press only the Daily Mail and the Daily Telegraph are implacably antigovernment. The Sun can give New Labour a hard time, particularly on Europe, but often sleeps on its sword. The Daily Mirror is supposed to be pro-government, though increasingly it forgets itself. The Daily Express forgets itself less often. The Guardian is capable of being beastly to New Labour. The Independent, at heart Blairite. has recently run several stories which will not have gone down well in Downing Street. The Financial Times remains favourably disposed towards the regime, though its mind is often on other things. Which brings me to the Times, the subject of this column.

On Wednesday of last week, when the story about Black Rod achieved lift-off, the Times deployed a classic spoiling tactic. While the rest of the press was preoccupied with the withdrawal of the government's complaint against three publications, including The Spectator, the Times wheeled out Charles Clarke, Labour's chairman. Mr Clarke was permitted to fume against 'pious and hypocritical' newspapers and generally twisting journalists, and his turnings were written up as a splash. Buried in the story — written by Philip Webster, the paper's political editor and, as it happens, a mate of Mr Clarke, with whom he shares a passion for Norwich City football club — were references to the Black Rod saga. But the effect was brilliantly to turn the tables, so that New Labour, far from being represented as on the ropes, was allowed to berate a morally defective press.

It was not until two days later, Friday, that column seven of the front page of the Times conceded that New Labour was in some trouble. On Thursday the paper had carried a third editorial which warned that 'a question mark hangs over the probity and honesty of Downing Street'. On Friday, Simon Jenkins — how one admires him despite everything; despite even the Dome — gave the government both barrels. This illustrates my point perfectly. Times journalists do not sing from a solitary hymn sheet. The paper is not uniform. Columnists such as Mr Jenkins, William Rees-Mogg, Matthew Parris and Michael Gove are not inclined to trumpet the government's achievements. Others — Alice Miles, Mary Ann Sieghart and, above all, Peter Riddell — are. Fair enough. The leading articles, though rarely antagonistic, from time to time chide the government. But it is in the news columns, and particularly in stories written by Philip Webster and his deputy, Tom Baldwin, that New Labour enjoys its softest ride — witness the Black Rod story last week.

Mr Webster is by all accounts a first-class reporter. Mr Baldwin is a wilder and more picaresque character, though also gifted. Their reasoning seems to be that if they lay off New Labour wherever possible, the paper will be rewarded with exclusives, which often take the form of interviews with leading ministers. The principle of quid pro quo is understood by both sides. When Labour scandals arise — and God knows there have been enough of them — the Times is often slow on the uptake, and only enters the fray when it becomes clear that the story will not go away. That has been the pattern with `Mittalgate', more recently with the memo targeting Pam Warren, and, last week, with Black Rod. The paper is also often slow to editorialise on these issues, though it may get there in the end.

Mr Baldwin is particularly close to Alastair Campbell. He has also become chummy with the BBC's Andrew Marr, another New Labourite, with whom he went on a bonding bender during one of Tony Blair's recent forays to Africa. At the beginning of May, Baldwin and Marr discovered that Mr Campbell was intending to abolish the Parliamentary Lobby. They checked their story with Mr Campbell, who decided that he would have to tell all the press. This was obviously very annoying for Baldwin and Marr. By way of compensation, Mr Baldwin was granted an exclusive and very unusual interview with Mr Campbell a few days later. Mr Campbell was allowed to muse along the lines that the age of spinning was coming to an end (what a joke!), and got in a dig or two at the media. Both sides were happy — the Times and the government. That is how it works.

I should emphasise again that the Times is not uniformly sympathetic to the government, even in its news columns. Only on Wednesday the paper made much on its front page of Cherie Blair's 'suicide bomb blunder', though she was not chastised in the paper's leading article on Palestine. Perhaps Robert Thomson, the new editor of the Times, calculated that his proprietor, Rupert Murdoch, is a friend of Israel, and this thought triumphed over his feelings of loyalty towards the Prime Minister's wife.

The reasons for the Times being so close to New Labour are complex and various. Of course, one should not discount straightforward belief. Some of those boys genuinely like New Labour. Mr Webster and Mr Baldwin have their own agenda, as we have seen. Mr Thomson's motives are different again. He inherited a newspaper which, under the editorship of my old friend, Peter Stothard, had already made its accommodation with New Labour. If anything, the bonds of friendship have tightened since Mr Thomson took over. I do not imagine for a moment that Mr Murdoch has said to him, 'Be nice to the government because I don't want it to stand in the way of my buying Channel 5.' But Mr Thomson understands the context in which he operates. He may also — I am not sure about this — be the sort of fellow who does not want to cross the powers that be, even when they misbehave. Time will tell us what kind of editor he really is. But to side, at any rate initially, with Alastair Campbell and the government when they had been seen off by the press — well, that seems to me a very dreary and bloodless thing to do.

Lst week I wrote that my esteemed colleague Roy Greenslade had written a venomous column about the Black Rod affair for the Guardian website, and then produced a toned-down version for the Guardian media pages after he had spoken to Peter Wright, editor of the Mail on Sunday. An email from Janine Gibson, the Guardian's media editor, informs me that this is not strictly accurate. Roy's first piece was intended for the paper's media pages, and was merely posted on the Guardian website He did then speak to Mr Wright and rewrote his column. But the first version, for bizarre technical reasons to do with Quark, could not be removed.

I have been trying desperately to see whether Roy emerges from this story in a more heroic light. We all want him to be rehabilitated and to feel more comfortable with himself. And, you know, I think he does come out of this version a little better. He did, after all, seek to change his piece. It was only his bad luck that the earlier version had been preserved for posterity by Quark.