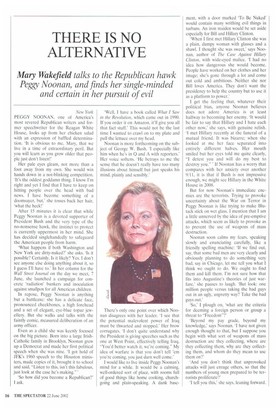 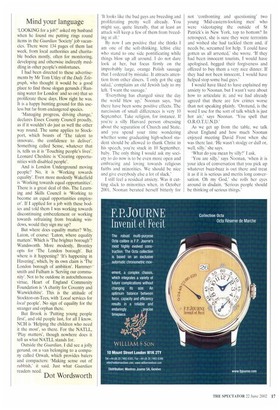 THERE IS NO ALTERNATIVE

Mary Wakefield talks to the Republican hawk Peggy Noonan, and finds her single-minded and certain in her pursuit of evil

New York PEGGY NOONAN, one of America's most revered Republican writers and former speechwriter for the Reagan White House, looks up from her chicken salad with an expression of baffled determination. 'It is obvious to me, Mary, that we live in a time of extraordinary peril. But you will learn as you grow older that people just don't listen!'

Her pale eyes gleam, not more than a foot away from my own. She would win hands down in a not-blinking competition. 'It's the oddest goddamn thing. I know I'm right and yet I find that I have to keep on hitting people over the head with bad news. I have become something of a doomsayer, but,' she tosses back her hair, 'what the heck!'

After 15 minutes it is clear that while Peggy Noonan is a devoted supporter of President Bush and the very type of the no-nonsense hawk, the instinct to protect is currently uppermost in her mind. She has decided singlehandedly to safeguard the American people from harm.

'What happens if both Washington and New York are dirty-nuked?' she asks. 'Is it possible? Certainly. Is it likely? Yes. I don't see anyone else doing anything about it, so I guess I'll have to.' In her column for the Wall Street Journal on the day we meet, 7 June, she launched a campaign for concrete 'radiation' bunkers and inoculation against smallpox for all American children.

In repose, Peggy Noonan is anything but a battleaxe: she has a delicate face, pronounced cheekbones, a high forehead and a set of elegant, eye-blue topaz jewellery. But she walks and talks with the faintly comic, measured deliberation of an army officer.

Even as a child she was keenly focused on the big picture. Born into a large IrishCatholic family in Brooklyn, Noonan grew up a Democrat and made her first political speech when she was nine. 'I got hold of JFK's 1960 speech to the Houston ministers, made copies of it, brought it to school and said, "Listen to this, isn't this fabulous, just look at the case he's making."' 'So how did you become a Republican?' I ask. 'Well, I have a book called What I Saw in the Revolution, which came out in 1990. If you order it on Amazon, it'll give you all that fact stuff.' This would not be the last time I wanted to crawl on to my plate and pull the lettuce over my head.

Noonan is more forthcoming on the subject of George W. Bush. 'I especially like him when he's in Q and A with reporters.' Her voice softens. 'He betrays to me the sense that he doesn't really have too many illusions about himself but just speaks his mind, plainly and sensibly.'

There's only one point over which Noonan disagrees with her leader. 'I see that the potential malevolent power of Iraq must be thwarted and stopped.' Her brow corrugates. 'I don't quite understand why the President is giving speeches such as the one at West Point, effectively telling Iraq, "You'd better watch it, we're coming." My idea of warfare is that you don't tell 'ern you're coming, you just darn well come.'

I would like to live inside Peggy Noonan's mind for a while. It would be a calming, well-ordered sort of place, with rooms full of good things like home cooking, churchgoing and plain-speaking. A dank base merit. with a door marked 'To Be Nuked' would contain many writhing evil things in turbans. An iron maiden would be set aside especially for Bill and Hillary Clinton.

'When I first met Hillary Clinton she was a plain, dumpy woman with glasses and a shawl. I thought she was sweet,' says Noonan, author of The Case Against Hillary Clinton, with wide-eyed malice. 'I had no idea how dangerous she would become. People have worked on her clothes and her image; she's gone through a lot and come out cold and ambitious. Neither she nor Bill loves America. They don't want the presidency to help the country but to use it as a platform to power.'

I get the feeling that, whatever their political bias, anyone Noonan believes does not adore America is at least halfway to becoming her enemy, 'It would be fair to say that Hillary and I hate each other now,' she says, with genuine relish. 'I met Hillary recently at the funeral of a mutual friend. It was bizarre; when she looked at me her face separated into entirely different halves. Her mouth smiled but her eyes told me quite clearly, "I detest you and will do my best to destroy you." ' If Noonan has a worry that compares with her anxiety over another 9/11, it is that if Bush is not impressive enough, we might see Hillary in the White House in 2008.

But for now Noonan's immediate enemies are the terrorists. Trying to provoke uncertainty about the War on Terror in Peggy Noonan is like trying to make Blutack stick on wet glass. I mention that I am a little unnerved by the idea of pre-emptive attacks, which seem as likely to provoke as to prevent the use of weapons of mass destruction.

Noonan soon calms my fears, speaking slowly and enunciating carefully, like a friendly spelling machine: 'If we find out, say, that some bad men are very clearly and obviously planning to do something very bad, say in Chicago, let me tell you what I think we ought to do. We ought to find them and kill them. I'm not sure how that fits into Augustine's theories of just warfare,' she pauses to laugh. 'But look: one million people versus taking the bad guys out in an ugly, unpretty way? Take the bad guys out.'

'So,' I plough on. 'what are the criteria for deeming a foreign person or group a threat to "Freedom"?'

'And you don't think that unprovoked attacks will just enrage others, so that the numbers of young men prepared to be terrorists proliferate?'

'I tell you this,' she says, leaning forward. 'It looks like the bad guys are breeding and proliferating pretty well already. You might say, quite literally, that at least an attack will keep a few of them from breeding at all.'

By now I am positive that she thinks I am one of the soft-thinking, leftist elite who stand to one side pontificating while things blow up all around. I do not dare look at her, but focus firmly on the improbably large, orange Polish sausage that I ordered by mistake. It attracts attention from other diners. 'I only got the egg salad,' complains an old Jewish lady to my left. 'I want the sausage.'

'Everything has changed since the day the world blew up,' Noonan says, 'but there have been some positive effects. The narcissism of small differences is very 10 September. Take religion, for instance. If you're a silly Harvard person obsessing about the separation of Church and State, and you spend your time wondering whether some graduating high-school student should be allowed to thank Christ in his speech, you're stuck in 10 September, baby. The only thing I would ask my society to do now is to be even more open and embracing and loving towards religious faiths and minorities. We should be nice and give everybody else a lot of slack.'

I still feel a residual anxiety. Was it cutting slack to minorities when, in October 2001, Noonan berated herself bitterly for not `confronting and questioning' two young `Mid-eastern-looking men' who were videotaping the outside of St Patrick's in New York, top to bottom? In retrospect, she is sure they were terrorists and wished she had tackled them and, if needs be, screamed for help. 'I could have gotten us all arrested,' she wrote. If they had been innocent tourists, I would have apologised, begged their forgiveness and offered to buy them a very nice dinner. If they had not been innocent, I would have helped stop some bad guys.'

would have liked to have explained my anxiety to Noonan, but I wasn't sure about how to articulate it; and we had already agreed that there are few crimes worse than not speaking plainly. 'Orotund, is the word I use for the sort of talk which is just hot air,' says Noonan. 'You spell that O.R.O.T.U.N.D.'

As we get up from the table, we talk about England and how much Noonan enjoyed meeting David Frost when she was there last. 'He wasn't stodgy or dull or, well, silly,' she says.

'What do you mean by silly?' I ask, 'You are silly,' says Noonan, when it is your idea of conversation that you pick up whatever buzz-buzz is out there and treat it as if it is serious and merits long conversation. Oh my God,' she rolls her eyes around in disdain. 'Serious people should be thinking of serious things.'