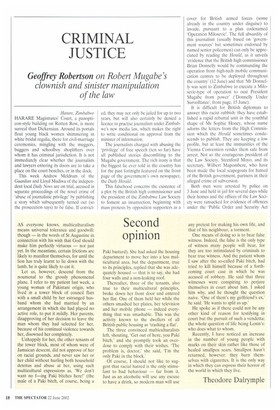 AS everyone knows, multiculturalism means universal tolerance and goodwill: though — in the words of St Augustine in connection with his wish that God should make him perfectly virtuous — not just yet. In the meantime, certain frictions are likely to manifest themselves, for until the lion has truly learnt to lie down with the lamb, he is quite likely to eat it.

Let us, however, descend from the noumenal to the grossly phenomenal plane. I refer to my patient last week, a young woman of Pakistani origin, who lived in a tower block of council flats with a small child by her estranged husband whom she had married by an arrangement in which she had played no active role, to put it mildly. Her parents, disapproving of her decision to leave the man whom they had selected for her, because of his continual violence towards her, disowned her completely.

Unhappily for her, the other tenants of the tower block, most of whom were of Jamaican descent, did not approve of her on racial grounds, and never saw her or her child without hurling both household detritus and abuse at her, using such multicultural expressions as, 'We don't want no f—ing Paki bitches here!' (the male of a Paki bitch, of course, being a Paki bastard). She had asked the housing department to move her into a less multicultural area, but the department, true to its principles, replied that she was adequately housed — that is to say, she had four walls and a non-leaking roof.

Thereafter, three of the tenants, also true to their multicultural principles, broke down her front door and entered her flat. One of them held her while the others smashed her plates, her television and her mobile phone — indeed everything that was smashable. This was the activity known to the dwellers of all British public housing as 'trashing a flat'.

The three convinced multiculturalists left, shouting, 'Get out of here, you Paki bitch,' and she promptly took an overdose to comply with their wishes. 'The problem is, doctor,' she said, 'I'm the only Paki in the block.'

Of course, I should not like to suggest that racial hatred is the only stimulant to bad behaviour — far from it. Just as an alcoholic will use any excuse to have a drink, so modern man will use any pretext for making his own life, and that of his neighbour, a torment.

One means of doing so is to bear false witness. Indeed, the false is the only type of witness many people will bear, for they are too intimidated by criminals to bear true witness. And the patient whom I saw after the so-called Paki bitch, had tried to kill himself because of a forthcoming court case in which he was accused of robbery. He said that three witnesses were conspiring to perjure themselves in court about him. I asked him why, and he thought the question naive. 'One of them's my girlfriend's ex,' he said. 'He wants to split us up.'

He spoke as if there could not be any other kind of reason for testifying in court but the pursuit of such a vendetta; the whole question of life being Lenin's: who does what to whom.

Recently, I have noticed an increase in the number of young people with marks on their skin rather like those of healed smallpox scars. Smallpox hasn't returned, however: they burn themselves with cigarettes. It is the only way in which they can express their horror of the world in which they live.