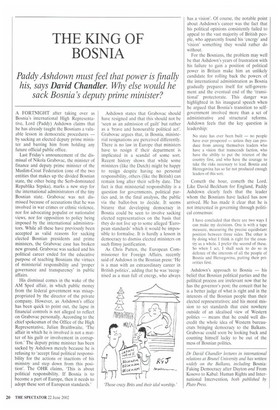 THE KING OF BOSNIA

Paddy Ashdown must feel that power is finally

his, says David Chandler. Why else would he

A FORTNIGHT after taking over as Bosnia's international High Representative, Lord (Paddy) Ashdown claims that he has already taught the Bosnians a valuable lesson in democratic procedures — by sacking an elected deputy prime minister and barring him from holding any future official public office.

Last Friday's announcement of the dismissal of Nikola Grabovac, the minister of finance and deputy prime minister of the Muslim-Croat Federation (one of the two entities that makes up the divided Bosnian state, the other being the Serb-dominated Republika Srpska), marks a new step for the international administrators of the tiny Bosnian state. Grabovac was not dismissed because of accusations that he was involved in war crimes or ethnic violence, nor for advocating populist or nationalist views, nor for opposition to policy being imposed by the international administrators. While all these have previously been accepted as valid reasons for sacking elected Bosnian presidents and prime ministers, the Grabovac case has broken new ground. Grabovac was sacked and his political career ended for the educative purpose of teaching Bosnians the virtues of ministerial responsibility and 'proper governance and transparency' in public affairs.

His dismissal comes in the wake of the AM Sped affair, in which public money from the federal government was misappropriated by the director of the private company. However, as Ashdown's office has been quick to point out, the lapse in financial controls is not alleged to reflect on Grabovac personally. According to the chief spokesman of the Office of the High Representative, Julian Braithwaite, 'The affair in which he is involved is not a matter of his guilt or involvement in corruption.' The deputy prime minister has been sacked by Ashdown merely because he is refusing to 'accept final political responsibility for the actions or inactions of his ministry and step down from this position'. The OHR claims, 'This is about political responsibility. If Bosnia is to become a part of Europe, then it needs to adopt these sort of European standards.' Ashdown states that Grabovac should have resigned and that this should not be 'seen as an admission of guilt' but rather as a 'brave and honourable political act'. Grabovac argues that, in Bosnia, ministerial resignations are perceived differently. There is no law in Europe that ministers have to resign if their department is implicated in a scandal of some sort. Recent history shows that while some ministers (like the Dutch) might be happy to resign despite having no personal responsibility, others (like the British) can remain long after their sell-by date. The fact is that ministerial responsibility is a question for governments, political parties and, in the final analysis, the public via the ballot-box to decide. It seems bizarre that developing democracy in Bosnia could be seen to involve sacking elected representatives on the basis that they do not live up to some alleged 'European standards' which it would be impossible to formalise. It is hardly a lesson in democracy to dismiss elected ministers on such flimsy justification.

As Chris Patten, the European Commissioner for Foreign Affairs, recently said of Ashdown in the Bosnian press: 'He is a man with an extraordinary career in British politics', adding that he was 'recognised as a man full of energy, who always has a vision'. Of course, the notable point about Ashdown's career was the fact that his political opinions consistently failed to appeal to the vast majority of British people, who apparently found his 'energy' and 'vision' something they would rather do without.

For the Bosnians, the problem may well be that Ashdown's years of frustration with his failure to gain a position of political power in Britain make him an unlikely candidate for rolling back the powers of the international administration as Bosnia gradually prepares itself for self-government and the eventual end of the 'transitional' protectorate. This danger was highlighted in his inaugural speech when he argued that Bosnia's transition to selfgovernment involved more than a set of administrative and structural reforms. Ashdown feels that the key question is leadership:

No state has ever been built — no people have ever prospered — unless they can produce from among themselves leaders who have a vision that transcends faction, who have the ability to put the interest of the country first, and who have the courage to take the risks necessary to lead. Bosnia and Hercegovina has so far not produced enough leaders of this sort.

Cometh the hour, cometh the Lord. Like David Beckham for England, Paddy Ashdown clearly feels that the leader whom the Bosnians have lacked has now arrived. He has made it clear that he is not interested in governing through political consensus:

I have concluded that there are two ways I can make my decisions. One is with a tape measure, measuring the precise equidistant position between three sides. The other is by doing what I think is right for the country as a whole. I prefer the second of these. So when I act, I shall seek to do so in defence of the interests of all the people of Bosnia and Hercegovina, putting their priorities first.

Ashdown's approach to Bosnia — his belief that Bosnian political parties and the political process are irrelevant now that he has the governor's post; the conceit that he is a better judge of what is right and in the interests of the Bosnian people than their elected representatives; and his moral mission to set standards that exist nowhere outside of an idealised view of Western politics — means that he could well discredit the whole idea of Western bureaucrats bringing democracy to the Balkans. Grabovac could soon be looking back and counting himself lucky to be out of the mess of Bosnian politics.

Dr David Chandler lectures in international relations at Brunel University and has written widely on the Balkans, including Bosnia: Faking Democracy after Dayton and From Kosovo to Kabul; Human Rights and International Intervention, both published by Pluto Press.