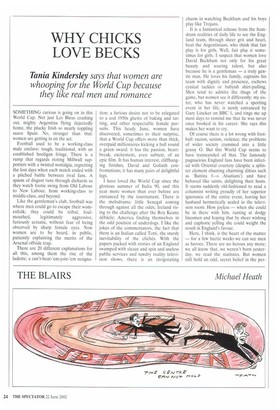 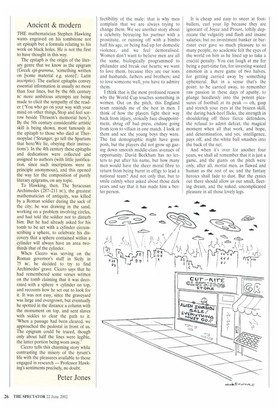 Tania Kindersley says that women are

SOMETHING curious is going on in this World Cup. Not just Les Bleus crashing out, mighty Argentina flying dejectedly home, the plucky Irish so nearly toppling suave Spain. No, stranger than that: women are getting in on the act.

Football used to be a working-class male enclave: tough, traditional, with an established hooligan fringe. There is a rump that regards rioting Millwall supporters with a twisted nostalgia, regretting the lost days when each match ended with a pitched battle between rival fans. A spasm of disgust runs through diehards as they watch footie swing from Old Labour to New Labour, from working-class to middle-class, and beyond.

Like the gentleman's club, football was where men could go to escape their womenfolk; they could be tribal, foul mouthed, legitimately aggressive, furiously ecstatic, without fear of being observed by sharp female eyes. Now women are to be heard, in public, patiently explaining the merits of the Arsenal offside trap.

There are 20 different explanations for all this, among them the rise of the ladette; a can't-beat-'em-join-'em resigna tion; a furious desire not to be relegated to a cod 1950s ghetto of baking and tatting, and other respectable female pursuits. This heady June, women have discovered, sometimes to their surprise, that a World Cup offers more than thick, overpaid millionaires kicking a ball round a green sward: it has the passion, heartbreak, excitement, even subtext, of an epic film. It has human interest, cliffhanging finishes, David and Goliath confrontations; it has many pairs of delightful legs.

I have loved the World Cup since the glorious summer of Italia 90, and this year more women than ever before are entranced by the tournament. There is the melodrama: little Senegal coming through against all the odds; Ireland rising to the challenge after the Roy Keane debacle; America finding themselves in the odd position of underdogs. I like the jokes of the commentators, the fact that there is an Italian called Totti, the sturdy inevitability of the clichés. With the papers packed with stories of an England swamped with sleaze and spin and useless public services and tawdry reality television shows, there is an invigorating charm in watching Beckham and his boys play like Trojans.

It is a fantastical release from the humdrum realities of daily life to see the England team, through sheer grit and heart, beat the Argentinians, who think that fair play is for girls. Well, fair play is sometimes for girls. I suspect that women love David Beckham not only for his great beauty and soaring talent, but also because he is a gentleman — a truly gentle man. He loves his family, captains his team with dignity and presence, eschews cynical tackles or babyish shirt-pulling. Men tend to admire the thugs of the game, but women see it differently: my sister, who has never watched a sporting event in her life, is newly entranced by Gary Lineker on BBC 1, and rings me up most days to remind me that he was never once booked in his career. She says this makes her want to cry.

Of course there is a lot wrong with football: racism, sexism, violence; the problems of wider society crammed into a little grassy 0. But this World Cup seems to have transcended all that. The famously pugnacious England fans have been infected with Oriental courtesy (despite a splinter element chanting charming ditties such as 'Batista f—s Alsatians') and have behaved like saints, delighting their hosts. It seems suddenly old-fashioned to read a columnist writing proudly of her superior ignorance of the entire event, leaving her husband hermetically sealed in the television room. How joyless — when she could be in there with him, ranting at dodgy linesmen and hoping that by sheer wishing and euphoric yelling she could weight the result in England's favour.

Here, I think, is the heart of the matter — for a few hectic weeks we can see men as heroes. There are no heroes any more; we all know that, we weren't born yesterday, we read the statistics. But women still hold an odd, secret belief in the per fectibility of the male: that is why men complain that we are always trying to change them. We see another story about a celebrity betraying his partner with a prostitute, or running off with a bimbo half his age, or being had up for domestic violence, and we feel demoralised. Women don't want to believe men are all the same, biologically programmed to philander and break our hearts; we want to love them, because they are our sons and husbands, fathers and brothers; and to love someone well, you have to admire them.

I think that is the most profound reason why the World Cup touches something in women. Out on the pitch, this England team reminds me of the best in men. I think of how the players fight their way back from injury, stoically face disappointment, shrug off bad press, endure going from icon to villain in one match. I look at them and see the young boys they were. The fan demographic might have gone posh, but the players did not grow up gazing down smooth middle-class avenues of opportunity. David Beckham has no letters to put after his name, but how many men would have the sheer moral fibre to return from being burnt in effigy to lead a national team? And not only that, but to smile calmly when asked about those dark years and say that it has made him a better person. It is cheap and easy to sneer at footballers, curl your lip because they are ignorant of Joyce and Proust, loftily deprecate the vulgarity and flash and insane salaries; but no investment banker or barrister ever gave so much pleasure to so many people, no academic felt the eyes of the world on him as he lined up to take a crucial penalty. You can laugh at me for being a part-time fan, for investing wasted emotion in a mere game of two halves, for getting carried away by something ephemeral. But in a sense that's the point: to be carried away, to remember raw passion in these days of apathy, to plunge heedlessly into the potent pleasures of football at its peak — oh, gasp and stretch your eyes at the brazen skill, the daring back-heel flicks, the strength in shouldering off three fierce defenders, the refusal to admit defeat, the magical moment when all that work, and hope, and determination, and yes, intelligence, pays off, and the white ball smashes into the back of the net.

And when it's over for another four years, we shall all remember that it is just a game, and the giants on the pitch were only, after all, mortal men, as flawed and human as the rest of us; and the fantasy heroics shall fade to dust. But the cynics out there should allow us our small, fleeting dream, and the naked, uncomplicated pleasure in all those lovely legs.