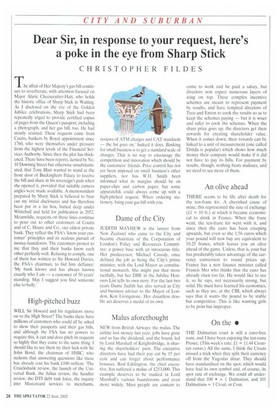 Dear Sir, in response to your request, here's a poke in the eye from Sharp Stick

The affair of Her Majesty's gas bill continues to reverberate, with attention focused on Major Alaric Cheesecutter-Hatt, who holds the historic office of Sharp Stick in Waiting. As I disclosed on the eve of the Golden Jubilee celebrations, Sharp Stick had been repeatedly urged to provide certified copies of pages from the Queen's passport, including a photograph, and her gas bill, too. He had stoutly resisted. These requests came from Coutts, bankers by Royal appointment since 1760, who were themselves under pressure from the highest levels of the Financial Services Authority. Since then the plot has thickened. There have been reports, denied by No. 10 Downing Street but otherwise unsubstantiated, that Tony Blair wanted to stand at the front door of Buckingham Palace to receive the bill and share in his sovereign's pain when she opened it, provided that suitable camera angles were made available. A memorandum prepared by Sharp Stick is believed to bear out my initial disclosures and has therefore been put in a tin box, buried deep under Whitehall and held for publication in 2052. Meanwhile, requests on these lines continue to pour out to other customers of Coutts and of C. Hoare and Co., our oldest private bank. They reflect the FSA's 'know your customer' principles and its zealous pursuit of money-launderers. The customers protest to me that they and their banks know each other perfectly well. Refusing to comply, one of them has written to Sir Howard Davies, the FSA's chairman, to bid him defiance: 'My bank knows and has always known exactly who I am — a customer of 50 years' standing. May I suggest you find someone else to bully.'

WILL Sir Howard and his regulators move on to the High Street? The banks there have millions of customers who could all be asked to show their passports and their gas bills, and although the FSA has no powers to require this, it can and does pitch its requests so highly that they come to the same thing. I should like to see them try their luck with Sir John Bond, the chairman of HSBC, who reckons that answering questions like these has already cost his bank £100 million: 'The Cruickshank review, the launch of the Universal Bank, the Julius review, the Sandler review, the DTI debt task force, the inquiry into Mastercard services to merchants, reviews of ATM charges and CAT standards — the list goes on. Indeed it does. Banking for small business is to get a standard scale of charges. That is no way to encourage the competition and innovation which should be the customers' friends. Price control has not yet been imposed on small business's other suppliers, nor has W.H. Smith been informed what its margins should be on paper-clips and carbon paper, but some apparatchik could always come up with a high-pitched request. When ordering stationery, bring your gas bill with you.

Dame of the City

JUDITH MAYHEW is the lawyer from New Zealand who came to the City and became chairman of the Corporation of London's Policy and Resources Committee: a power base with an innocuous title. Her predecessor, Michael Cassidy, once defined the job as being the City's prime minister, with the Lord Mayor as constitutional monarch. She might put that more tactfully, but her DBE in the Jubilee Honours List tells its own story. For the last two years Dame Judith has also served as City and business adviser to the Mayor of London, Ken Livingstone. Her dauntless double act deserves a medal of its own.

NEW from British Airways: the malus. The airline lost money last year, jobs have gone and so has the dividend, and the board, led by Lord Marshall of Knightsbridge, is sharing the shareholders' pain. The executive directors have had their pay cut by 15 per cent and can forget about performance bonuses. Rod Eddington, the chief executive, has suffered a malus of £253,000. This example deserves to be studied in Lord Marshall's various boardrooms and even more widely. Most people are content to come to work and be paid a salary, but directors now expect numerous layers of icing on top. These complex incentive schemes are meant to represent payment by results, and have tempted directors of Tyco and Enron to cook the results so as to keep the schemes paying — but it is wiser and safer to cook the schemes. When the share price goes up, the directors get their rewards for creating shareholder value. When it comes down, their rewards can be linked to a unit of measurement (one called Ebitda is popular) which shows how much money their company would make if it did not have to pay its bills. For payment by results, though, nothing beats maluses, and we need to see more of them.

THERE seems to be life after death for the ten-franc kir. A cherished cause of mine, this represented the rate of exchange (£1 = 10 fr.) at which it became economical to drink in France. When the franc went, the ten-franc kir went with it, and since then the euro has been creeping upwards, but even so the 1.56 euros which your pound will now buy are equivalent to 10.25 francs, which leaves you an olive ahead of the game. Unless, that is, your bar has predictably taken advantage of the currency conversion to round prices up. France has a new finance minister called Francis Mer who thinks that the euro has already risen too far. He would like to see it, so he says, not necessarily strong, but solid. He must have learned his economics, such as they are, at the CBI, which always says that it wants the pound to be stable but competitive. This is like wanting girls to be prim but improper.

THE Dalmatian coast is still a euro-free zone, and I have been enjoying the ten-cuna Prosec. (This week's rate: £1 = 11.44 Croatian cunas.) All the same, I think the Croats missed a trick when they split their currency off from the Yugoslav dinar. They should have standardised on the spot, which would have had its own symbol and, of course, its spot rate of exchange. We could all understand that 100 • = 1 Dalmatian, and 101 Dalmatians = 1 Croat, or Coat.