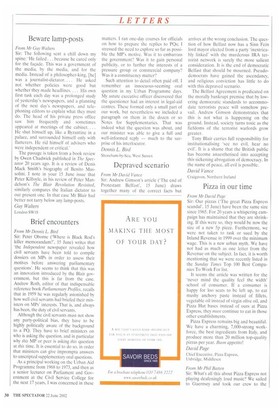 Pizza in our time

From Mr David Page Sir: Our pizzas (`The great Pizza Express scandal', 15 June) have been the same size since 1965. For 20 years a whispering campaign has maintained that they are shrinking. If this were so, they would be now the size of a new 5p piece. Furthermore, we were not taken to task or sued by the Inland Revenue in 1999 over the minimum wage. This is a new urban myth. We have not had as much as one letter from the Revenue on the subject. In fact, it is worth mentioning that we were recently listed in the Sunday Times Top 100 Best Companies To Work For list.

It seems the article was written for the 'never mind the quality feel the width' school of consumer. If a consumer is happy for loo seats to be left up, to eat mushy anchovy paste instead of fillets, vegetable oil instead of virgin olive oil, and Pizza Hut bases instead of ours at Pizza Express, they must continue to eat in those other establishments.

Pizza Express remains big and beautiful. We have a charming, 7,000-strong workforce, the best ingredients from Italy, and produce more than 20 million top-quality pizzas per year. Boon appetito!