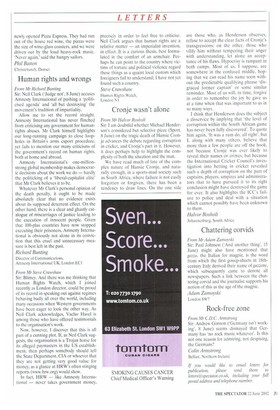 From Mr Richard Bunting Sir: Neil Clark ('Judge not', 8 June) accuses Amnesty International of pushing a 'politicised agenda' and 'all but destroying' the movement's tradition of impartiality.

Allow me to set the record straight. Amnesty International has never flinched from criticising any government for humanrights abuses. Mr Clark himself highlights our long-running campaign to close loopholes in Britain's arms export procedure, yet fails to mention our many criticisms of the government's record on human rights, both at home and abroad.

Amnesty International's one-millionstrong global membership makes democratic decisions about the work we do — hardly the politicking of a 'liberal-capitalist elite' that Mr Clark believes it to be.

Whatever Mr Clark's personal opinion of the death penalty, it ought to be made absolutely clear that no evidence exists about its supposed deterrent effect. On the other hand, there is a clear and ghastly catalogue of miscarriages of justice leading to the execution of innocent people. Given that 100-plus countries have now stopped executing their prisoners, Amnesty International is obviously not alone in its conviction that this cruel and unnecessary measure is best left in the past.