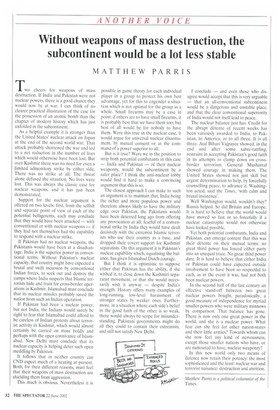 Page 32, 22 June 2002 — Without weapons of mass destruction, the subcontinent would be a lot less stable
Close

Without weapons of mass destruction, the subcontinent would be a lot less stable

Two cheers for weapons of mass destruction. If India and Pakistan were not nuclear powers, there is a good chance they would now be at war. I can think of no clearer practical illustration of the case for the possession of an atomic bomb than the chapter of modern history which has just unfolded in the subcontinent.

As a helpful example it is stronger than the United States' nuclear attack on Japan at the end of the second world war. That attack probably shortened the war and led to a net reduction in the number of lives which would otherwise have been lost. But over Kashmir there was no need for even a limited admonitory strike by either side. There was no strike at all. The threat alone defused the situation. No lives were lost. This was always the classic case for nuclear weapons, and it has just been demonstrated.

Support for the nuclear argument is offered on two levels: first, from the selfish and separate point of view of each of the potential belligerents, each may conclude that they would have been attacked — with conventional or with nuclear weapons — if they had not themselves had the capability to respond with a nuclear strike.

If Pakistan had no nuclear weapons, the Pakistanis would have been at a disadvantage. India is the superior power in conventional terms. Without Pakistan's nuclear capacity, that country might have expected a brutal and swift incursion by conventional Indian forces, to seek out and destroy the camps where India suspects that Islamic terrorists hide and train for cross-border operations in Kashmir. Islamabad must conclude that its nuclear missiles probably saved the nation from such an Indian operation.

If Pakistan had been a nuclear power, but not India, the Indians would surely be right to fear that Islamabad could afford to be careless of Indian protests about terrorist activity in Kashmir, which would almost certainly be carried on more boldly and perhaps with the open connivance of Islamabad. New Delhi must conclude that its nuclear capacity is helping deter such open meddling by Pakistan.

It follows that in neither country can CND expect much of a hearing at present. Both, for their different reasons, must feel that their weapons of mass destruction are shielding them from aggression.

This much is obvious. Nevertheless it is possible in game theory for each individual player in a group to protect his own best advantage, yet for this to engender a situation which is not optimal for the group as a whole, Small firearms may be a case in point: if others are to have small firearms, it is probably best that we have them too; but best of all would be for nobody to have them. Were this true in the nuclear case, it would argue for universal nuclear disarmament, by mutual consent or at the command of a power superior to all.

But is it true? Were we in the position to strip both potential combatants in this case — India and Pakistan — of their nuclear weaponry, would the subcontinent be a safer place? I think the anti-nuclear lobby would find it hard to make a convincing argument that this is so.

The closest approach I can make to such an argument is to maintain that, India being the richer and more populous power and therefore always likely to have the military edge over Pakistan, the Pakistanis would have been deterred long ago from offering any provocation at all; fearful of a conventional strike by India they would have dealt decisively with the extremist Islamic terrorists who use their country as a base, and dropped their covert support for Kashmiri separatists. On this argument it is Pakistan's nuclear capability which, equalising the balance, has given Islamabad Dutch courage.

But I think it is optimistic to suppose either that Pakistan has the ability, if she wished it, to close down the Kashmiri separatist movement, or that she would necessarily wish it anyway — despite India's strength. History offers many examples of long-running, low-level harassment of stronger states by weaker ones, Furthermore, in a situation where each side's belief in the good faith of the other is so weak, there would always be scope for misunderstanding. Pakistani governments might do all they could to contain their extremists, and still not satisfy New Delhi. I conclude — and even those who disagree would accept that this is very arguable — that an all-conventional subcontinent would be a dangerous and unstable place, and that the clear conventional superiority of India would not itself lead to peace.

The nuclear balance just has. Credit for the abrupt détente of recent weeks has been variously awarded to India, to Pakistan, to America, or to all three. It is all three. Atal Bihari Vajpayee showed, in the end and after some sabre-rattling, restraint in accepting Pakistan's good faith in its attempts to clamp down on crossborder terrorism. General Musharraf showed courage in making them. The United States showed not just skill but urgent determination to help, by forcefully counselling peace, to advance it. Washington acted, said the Times, 'with calm and brutal insistence'.

Well Washington would, wouldn't they? Russia helped. So did Britain and Europe. It is hard to believe that the world would have moved so fast or so forcefully if a nuclear catastrophe would not otherwise have looked possible.

Yet both potential combatants, India and Pakistan, can emerge content that this was their détente on their mutual terms: no great third power has forced either party into an unequal truce. No great third power dare. It is hard to believe that either India or Pakistan could have expected outside involvement to have been so respectful to each, as in the event it was, had not both been nuclear powers.

In the second half of the last century an effective stand-off between two great nuclear powers bought, paradoxically, a good measure of independence for myriad smaller powers who were military minnows by comparison. That balance has gone. There is now only one great power in the world, and she is a nuclear power. What fear can she feel for other nation-states and their little armies? Towards whom can she now feel any kind of nervousness, except those smaller nations who have, or are rumoured to have, nuclear weaponry?

In this new world only two means of defence now retain their potency: the most sophisticated and the least: nuclear war and terrorist nuisance: destruction and attrition.

Matthew Parris is a political columnist of the Times.