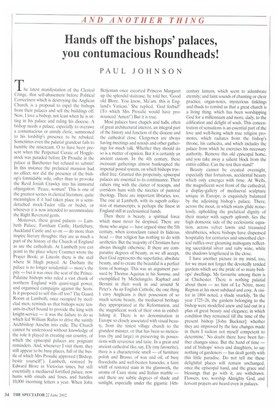 Hands off the bishops' palaces, you contumacious Roundheads!

The latest manifestation of the Clerical Cringe, that self-abasement before Political Correctness which is destroying the Anglican Church, is a proposal to expel the bishops from their palaces and sell the buildings off. Now. I love a bishop, not least when he is sitting in his palace and ruling his diocese. A bishop needs a palace, especially to overawe a contumacious or unruly cleric, summoned to his lordship's presence to be rebuked. Sometimes even the palatial grandeur fails to humble the miscreant. 0 to have been present when the Perpetual Curate of Hogglestock was paraded before Dr Proudie in the palace at Barchester but refused to submit! In this instance the prelatical mansion had no effect; nor did the presence of the bishop's formidable wife, other than to provoke the Revd Josiah Crawley into his immortal objurgation: 'Peace, woman!' This is one of the greatest scenes in clerical literature, quite meaningless if it had taken place in a semidetached mock-Tudor villa or bedsit, or wherever it is now intended to accommodate the Right Reverend gents.

Moreover, these grand palaces — Lambeth Palace, Farnham Castle, Hartlebury, Auckland Castle and so on — do more than inspire literary thoughts: they are as much a part of the history of the Church of England as are the cathedrals. At Lambeth you can point to the place where Cranmer wrote the Prayer Book; at Lincoln there is the stall where St Hugh prayed. At Durham the palace is no longer residential — mores the pity — but it was once the seat of the PrincePalatine bishops who ruled a vast chunk of northern England with quasi-regal power, and organised campaigns against the Scots. Is it proposed to sell this off too? The Guard Room at Lambeth, once occupied by steelclad men, reminds us that bishops were tenants-in-chief bound to provide the king with knight-service — it was the failure to do so which led William Rufus to drive the saintly Archbishop Anse1m into exile. The Church cannot be understood without knowledge of the role it played in creating our country, of which the episcopal palaces are poignant reminders. And, whenever I visit them, they still appear to be busy places, full of the bustle of which Mrs Proudie approved ('Bishop, bestir yourself!). Lambeth, restored by Edward Blore in Victorian times, but still essentially a mediaeval fortified palace, now hums with mails and faxes, and handles 10,000 incoming letters a year. When John Betjeman once escorted Princess Margaret up the splendid staircase, he told her, 'Good old Blore. You know, Ma'am, this is England's Vatican.' She replied, 'God forbid!' (To which Mrs Proudie would have pronounced 'Amen!') But it is true.

Most palaces have chapels and halls, often of great architectural interest, an integral part of the history and function of the diocese and the cathedral close. Clergymen are always having meetings and synods and other gatherings for much talk. Whether they should do so is a matter of opinion. But it is certainly an ancient custom. In the 4th century, these incessant gatherings almost bankrupted the imperial postal system, on which bishops travelled free. Granted this propensity, episcopal palaces are essential to its continuance. Their rafters ring with the clatter of teacups, and corridors hum with the niceties of pastoral theology. There are important libraries, too. The one at Lambeth, with its superb collection of manuscripts, is perhaps the finest in England still in ecclesiastical hands.

Then there is beauty, a spiritual force which must never be despised. There are those who argue — have argued since the 5th century, when iconoclasm raised its hideous head — that religion has nothing to do with aesthetics. But the majority of Christians have always thought otherwise. If there are comparative degrees of beauty, as we all accept, then God represents the superlative, absolute beauty, and to create the beautiful is a perfect form of homage. This was an argument pursued by Thomas Aquinas in his Summa, and exemplified by Michelangelo, Raphael and Bemini in their work in and around St Peter's. As an English Catholic, the one thing I envy Anglicans is their possession of so much serene beauty, the mediaeval heritage they appropriated at the Reformation, and the magnificent work of their own in embellishing it. There is no denomination in Europe so closely associated with visual beauty, from the tiniest village church to the grandest minster, or that has been so meticulous (by and large) in preserving its possessions with reverence and taste. In a great and ancient cathedral like, say, Ely (my favourite), there is a characteristic smell — of furniture polish and Brasso, of wax and oil, of busy floorcloths and well-beaten hassocks; a faint whiff of restored stain in the glasswork, the aroma of Caen stone and Italian marble — and there are subtle degrees of shade and sunlight, especially under the gigantic 14th century lantern, which seem to adumbrate eternity; and faint sounds of chanting or choir practice, organ-notes, mysterious tinklings and thuds to remind us that a great church is a living thing, which has been worshipping God for a millennium and more, daily, to the edification and delight of souls. This concentration of sensations is an essential part of the love and well-being which true religion promotes, which radiates from the bishop's throne, his cathedra, and which includes the palace from which he exercises his necessary authority. Remove this old episcopal home, and you take away a salient block from the entire edifice. Can the rest then stand?

Beauty cannot be created overnight, especially that fortuitous, accidental beauty which only emerges with time. At Wells, the magnificent west front of the cathedral, a display-gallery of mediaeval sculpture unique in Europe, is exquisitely balanced by the adjoining bishop's palace. There, across the moat, in which swans glide noiselessly, upholding the prelatical dignity of their master with superb aplomb, lies the high domestic side of the ecclesiastic equation, across velvet lawns and treasured shrubberies, where bishops have dispensed hospitality for centuries and smoothed clerical ruffles over gleaming mahogany reflecting sacerdotal silver and ruby wine, while the shadows lengthened in the close.

I have another picture in my mind, too, for we must not forget the devotedly tended gardens which are the pride of so many bishops' dwellings. My favourite among them is at Chichester. There is nothing palatial about them — no hint of Le Notre, more Repton at his most subdued and cosy. A visitor in 1804 noted, a shade snarkily, 'In the year 1725-26, the gardens belonging to the bishop were modelled anew and laid out in a plan of great beauty and elegance; in which condition they remained till the time of the present bishop [John Buckner]: whether they are improved by the late changes made in them I reckon not myself competent to determine.' No doubt there have been further changes since. But the hand of time — and of bishops' wives and daughters, to say nothing of gardeners — has dealt gently with this little paradise. Do not tell me these delightful places will remain unchanged, once the episcopal hand, and the grace and blessings that go with it, are withdrawn. Flowers, too, worship Almighty God, and fervent prayers are heard even in palaces.