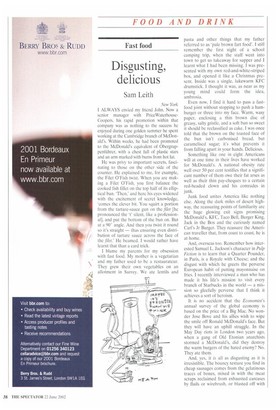 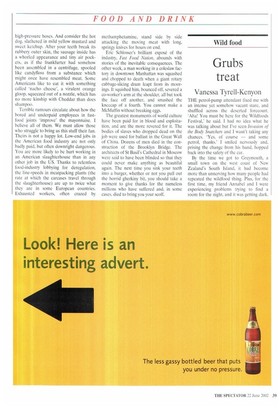 New York I ALWAYS envied my friend John, Now a senior manager with Price WaterhouseCoopers, his rapid promotion within that company was as nothing to the success he enjoyed during one golden summer he spent working at the Cambridge branch of McDonald's. Within weeks, he had been promoted to the McDonald's equivalent of Obergruppenfiihrer, with a chest full of plastic stars and an arm marked with burns from hot fat.

He was privy to important secrets, fascinating to those on the other side of the counter. He explained to me, for example, the Filet O'Fish twist. When you are making a Filet O'Fish, you first balance the cooked fish fillet on the top half of its elliptical bun. 'Then,' and here his eyes widened with the excitement of secret knowledge, 'comes the clever bit. You squirt a portion from the tartare-sauce gun on the filet [he pronounced the 't' silent, like a professional], and put the bottom of the bun on. But at a 90° angle. And then you twist it round so it's straight — thus ensuring even distribution of tartare sauce across the face of the filet.' He beamed. I would rather have learnt that than a card trick.

I blame my parents for my obsession with fast food. My mother is a vegetarian and my father used to be a restaurateur. They grew their own vegetables on an allotment in Surrey. We ate lentils and pasta and other things that my father referred to as 'pale brown fart food', I still remember the first night of a school camping trip, when the staff went into town to get us takeaway for supper and I learnt what I had been missing. I was presented with my own red-and-white-striped box, and opened it like a Christmas present. Inside was a single, lukewarm KFC drumstick. I thought it was, as near as my young mind could form the idea, ambrosia.

Even now, I find it hard to pass a fastfood joint without stopping to push a hamburger or three into my face. Warm, waxy paper, enclosing a thin brown disc of greasy, salty gristle, and a soft bun so sweet it should be reclassified as cake. I was once told that the brown on the toasted face of the bun isn't carbonised bread, but caramelised sugar; it's what prevents it from falling apart in your hands. Delicious.

Something like one in eight Americans will at one time in their lives have worked for McDonald's. A national obesity rate well over 50 per cent testifies that a significant number of them owe their fat arses as well as their thin pay-cheques to a certain red-headed clown and his comrades in junk.

Junk food unites America like nothing else. Along the dark miles of desert highway, the reassuring points of familiarity arc the huge glowing exit signs promising McDonald's, KFC, Taco Bell, Burger King, Jack in the Box and the curiously named Carl's Jr Burger. They reassure the American traveller that, from coast to coast, he is at home.

And, overseas too. Remember how interested Samuel L. Jackson's character in Pulp Fiction is to learn that a Quarter Pounder. in Paris, is a Royale with Cheese; and the disgust with which he greets the perverse European habit of putting mayonnaise on fries. I recently interviewed a man who has made it his life's mission to visit every branch of Starbucks in the world — a mission so gleefully perverse that I think it achieves a sort of heroism.

It is no accident that the Economist's annual survey of the global economy is based on the price of a Big Mac. No wonder Jose Bove and his allies wish to wipe the smile off Ronald McDonald's face. But they will have an uphill struggle. In the May Day riots in London two years ago, when a gang of Old Etonian anarchists stormed a McDonald's, did they destroy the warm burgers of the hated enemy? No. They ate them.

And, yes, it is all as disgusting as it is irresistible. The bouncy texture you find in cheap sausages comes from the gelatinous traces of bones, mixed in with the meat scraps reclaimed from exhausted carcases by flails or wirebrush, or blasted off with high-pressure hoses. And consider the hot dog. slathered in mild yellow mustard and sweet ketchup. After your teeth break its rubbery outer skin, the sausage inside has a whorled appearance and tiny air pockets, as if the frankfurter had somehow been assembled in a centrifuge, spooled like candyfloss from a substance which might once have resembled meat, Some Americans like to eat it with something called 'nacho cheese', a virulent orange gloop, squeezed out of a nozzle, which has no more kinship with Cheddar than does shampoo.

Terrible rumours circulate about how the bored and underpaid employees in fastfood joints 'improve' the mayonnaise. I believe all of them. We must allow those who struggle to bring us this stuff their fun. Theirs is not a happy lot. Low-end jobs in the American food industry are not only badly paid, but often downright dangerous. You are more likely to be hurt working in an American slaughterhouse than in any other job in the US. Thanks to relentless food-industry lobbying for deregulation, the line-speeds in meatpacking plants (the rate at which the carcases travel through the slaughterhouse) are up to twice what they are in some European countries. Exhausted workers, often crazed by methamphetamine, stand side by side attacking the moving meat with long, springy knives for hours on end.

Eric Schlosser's brilliant expose of the industry, Fast Food Nation, abounds with stories of the inevitable consequences. The other week, a man working in a coleslaw factory in downtown Manhattan was squashed and chopped to death when a giant rotary cabbage-slicing drum leapt from its moorings. It squished him, bounced off, severed a co-worker's arm at the shoulder, all but took the face off another, and smashed the kneecap of a fourth. You cannot make a McMuffin without breaking eggs.

The greatest monuments of world culture have been paid for in blood and exploitation, and are the more revered for it. The bodies of slaves who dropped dead on the job were used for ballast in the Great Wall of China. Dozens of men died in the construction of the Brooklyn Bridge. The architects of St Basil's Cathedral in Moscow were said to have been blinded so that they could never make anything as beautiful again. The next time you sink your teeth into a burger, whether or not you pull out the horrid gherkiny bit, you should take a moment to give thanks for the nameless millions who have suffered and, in some cases. died to bring you your scoff.