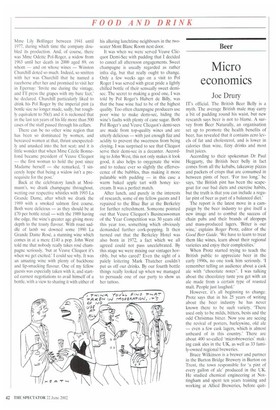 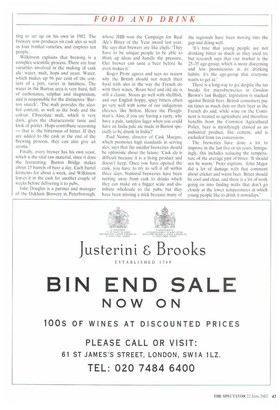 IT's official. The British Beer Belly is a myth. The average British male may carry a bit of padding round his waist, but new research says beer is not to blame. A survey from Beer Naturally, an organisation set up to promote the health benefits of beer, has revealed that it contains zero levels of fat and cholesterol, and is lower in calories than wine, fizzy drinks and most fruit juices.

According to their spokesman Dr Paul Heggarty, the British beer belly in fact comes from all the kebabs, takeaway pizzas and packets of crisps that are consumed in between pints of beer. 'For too long,' he says, 'the British pint has been the scapegoat for our bad diets and exercise habits, but the truth is that you can include a regular pint of beer as part of a balanced diet.'

The report is the latest move in a campaign by the beer industry to give itself a new image and to combat the success of chain pubs and their brands of alcopops and mass-produced lagers. 'Bitter is our wine,' explains Roger Protz, editor of the Good Beer Guide. 'We have to learn to treat them like wines, learn about their regional varieties and enjoy their complexities.'

When Protz started trying to teach the British public to appreciate beer in the early 1990s, no one took him seriously. remember telling an audience about a cask ale with "chocolate notes". I was talking about the chocolatey taste you get with an ale made from a certain type of roasted malt. People just laughed.'

However, it's all beginning to change. Protz says that in his 25 years of writing about the beer industry he has never known there to be such variety. 'There used only to be milds, bitters, bests and the odd Christmas bitter. Now you are seeing the revival of porters, barleywine, old ale — even a few cask lagers, which is almost unheard of in this country.' There are about 400 so-called `microbreweries' making cask ales in the UK, as well as 33 family-owned regional breweries.

Bruce Wilkinson is a brewer and partner in the Burton Bridge Brewery in Burton on Trent, the town responsible for 'a pint of every gallon of ale' produced in the UK. He studied chemical engineering at Nottingham and spent ten years training and working at Allied Breweries, before quit

ting to set up on his own in 1982. The brewery now produces six cask ales as well as four bottled varieties, and employs ten people.

Wilkinson explains that brewing is a complex scientific process. There are four variables involved in the making of cask ale: water, malt, hops and yeast. Water, which makes up 96 per cent of the content of a pint, varies in hardness. The water in the Burton area is very hard, full of carbonates, sulphur and magnesium, and is responsible for the distinctive 'Burton snatch'. 'The malt provides the alcohol content, as well as the body and the colour. Chocolate malt, which is very dark, gives the characteristic taste and look of porter. Hops contribute seasoning — that is, the bitterness of bitter. If they are added to the cask at the end of the brewing process, they can also give an aroma.'

Finally, every brewer has his own yeast, which is the vital raw material, since it does the fermenting. Burton Bridge makes about 15 barrels of beer a day. Each barrel ferments for about a week, and Wilkinson leaves it in the cask for another couple of weeks before delivering it to pubs.

Jake Douglas is a partner and manager of the Oakham Brewery in Peterborough. whose JHB won the Campaign for Real Ale's Bitter of the Year award last year. He says that brewers are like chefs: 'They have to be unique people to be able to think up ideas and handle the pressure. Our brewer can taste a beer before he even makes it.'

Roger Protz agrees and sees no reason why the British should not match their food with ales in the way the French do with their wines. 'Roast beef and old ale is still a classic. Stouts go well with shellfish, and our English hoppy, spicy bitters often go very well with some of our indigenous cheeses. like Stilton. Hence the Ploughman's. Also, if you are having a curry, why have a pale, tasteless lager when you could have an India pale ale made in Burton specially to be drunk in India?'

Paul Nunny, director of Cask Marque, which promotes high standards in serving ales, says that the smaller breweries should be optimistic about the future: 'Cask ale is difficult because it is a living product and doesn't keep. Once you have opened the cask, you have to try to sell it all within three days. National breweries have been turning away from cask to drinks which they can make on a bigger scale and distribute wholesale to the pubs, but they have been missing a trick because many of the regionals have been moving into the gap and doing well.

'It's true that young people are not drinking bitter as much as they used to; but research says that our market is the 25-35 age-group, which is more discerning and less promiscuous in its drinking habits: it's the age-group that everyone wants to get at.'

There is a long way to go; despite the tax breaks for microbreweries in Gordon Brown's last Budget, legislation is stacked against British beer. British consumers pay six times as much duty on their beer as the French do and, while wine on the Continent is treated as agriculture and therefore benefits from the Common Agricultural Policy, beer is mystifyingly classed as an industrial product, like cement, and is excluded from tax concessions.

The breweries have done a lot to improve in the last five or six years. Intriguingly, this includes reducing the temperature of the average pint of bitter. It should not be warm,' Protz explains. 'John Major did a lot of damage with that comment about cricket and warm beer. Bitter should be cool and clear, and there is a lot of work going on into finding malts that don't go cloudy at the lower temperatures at which young people like to drink it nowadays.'