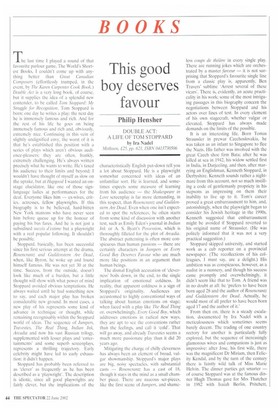 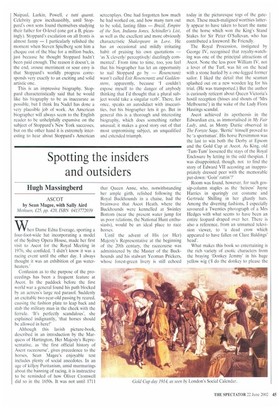 DOUBLE ACT: A LIFE OF TOM STOPPARD by Ira Nadel Methuen, 125, pp. 621, ISBN 0413730506 he last time I played a round of that favourite parlour game, The World's Shortest Books, I couldn't come up with anything better than Great Canadian Composers (effortlessly trumped, in the event, by The Karen Carpenter Cook Book.) Double Act is a very long book, of course, but it supplies the idea of a splendid new contender, to be called Torn Stoppard: My Struggle for Recognition. Tom Stoppard is born; one day he writes a play; the next day he is immensely famous and rich. And for the rest of his life he goes on being immensely famous and rich and, obviously, extremely nice. Continuing in this vein of slightly undignified envy, the worst of it is that he's established this position with a series of plays which aren't obvious audience-pleasers; they are often, frankly, extremely challenging. He's always written precisely what he wants to write. He's taxed his audience to their limits and beyond; I wouldn't have thought of myself as slow on the uptake, but at Hapgood I wanted an onstage elucidator, like one of those signlanguage ladies at performances for the deaf. Everyone likes him — ex-wives, critics, actresses, fellow playwrights. If this biography is to be believed, hard-bitten New York matrons who have never seen him before queue up for the honour of paying his bus fares. And he is not just a subsidised succes d'estime but a playwright with a real popular following. It shouldn't be possible.

Stoppard, basically, has been successful since his first serious attempt at the drama. Rosencrantz and Guildenstem Are Dead, when, like Byron, he woke up and found himself famous. He was not yet 30 at the time. Success, from the outside, doesn't look like much of a burden, but a little thought will show with what power of mind Stoppard avoided obvious temptations. He always waited until he had something new to say, and each major play has broken considerable new ground. In most cases, a new play of his represents some kind of advance in technique or thought, while remaining recognisably within the Stoppard world of ideas. The sequence of Jumpers, Travesties, The Real Thing, Indian Ink, Arcadia and now his vast Russian trilogy, supplemented with lesser plays and 'entertainments' and some superb screenplays, represents a thrilling trajectory. Early celebrity might have led to early exhaustion: it didn't happen.

Stoppard has probably been referred to as 'clever' as frequently as he has been described as a 'playwright'. The description is idiotic, since all good playwrights are fairly clever, but the implications of the

characteristically English put-down tell you a lot about Stoppard. He is a playwright somewhat concerned with ideas of an unfamiliar sort. He is learned, and sometimes expects some measure of learning from his audience — the Shakespeare in Love screenplay is far more demanding, in this respect, than Rosencrantz and Gui!denstern Are Dead. Even when one isn't expected to spot the references, he often starts from some kind of discussion with another text, such as Emily Eden's journal in Indian Ink or A. S. Byatt's Possession, which is thoroughly filleted for the plot of Arcadia. The abstract patterning is often more conspicuous than human passions — there are certainly characters in Jumpers or Evety Good Boy DeSerreS Favour who are much more like positions in an argument than human beings.

The dismal English accusation of 'cleverness' boils down, in the end, to the single implication of emotional coldness. In reality, that apparent coldness is a sign of Stoppard's originality. Audiences are accustomed to highly conventional ways of talking about human emotions on stage; when faced with a play like The Real Thing or, overwhelmingly. Every Good Boy, which addresses emotions in radical new ways, they are apt to see the conventions rather than the feelings, and call it 'cold'. That will go away, and already Travesties seems a much more passionate play than it did 20 years ago.

Mitigating the charge of chilly cleverness has always been an element of broad, vulgar showmanship. Stoppard's major plays are big, noisy spectacles, with substantial casts — Rosencrantz has a cast of 18, though it stays in the mind as a small chamber piece. There are raucous set-pieces, like the first scene of Jumpers, and shame less coups de theatre in every single play. There are running jokes which are orchestrated by a master farceur — it is not surprising that Stoppard's favourite single line from a classic play is, apparently, Ben Travers' sublime 'Arrest several of these vicars'. There is, evidently, an acute practicality in his work; some of the most intriguing passages in this biography concern the negotiations between Stoppard and his actors over lines of text. In every element of his own stagecraft, whether vulgar or elevated, Stoppard has always made demands on the limits of the possible.

It is an interesting life. Born Tomas Straussler in prewar Czechoslovakia, he was taken as an infant to Singapore to flee the Nazis. His father was involved with the great Czech shoe firm Bata; after he was killed at sea in 1942, his widow settled first in India, in Darjeeling, and then, after marrying an Englishman, Kenneth Stoppard, in Derbyshire. Kenneth sounds rather a nightmare from this account, not so much instilling a code of gentlemanly propriety in his stepsons as impressing on them their inability to live up to it. Tom's career proved a great embarrassment to him, and, astonishingly, when the playwright began to consider his Jewish heritage in the 1990s, Kenneth suggested that embarrassment might be avoided if Stoppard reverted to his original name of Straussler. (He was politely informed that it was not a very practical suggestion.)

From then on, there is a steady escalation, documented by Ira Nadel with a meticulousness which sometimes seems barely decent. The trading of one country rectory for another is particularly fully explored, but the sequence of increasingly glamorous wives and companions is just as impressive: after Jose, his first wife, there was the magnificent Dr Miriam, then Felicity Kendal, and by the turn of the century there is faintly wild talk of Miss Marie Helvin. The dinner parties get smarter — of course Stoppard was at the famous dinner Hugh Thomas gave for Mrs Thatcher in 1982 with Isaiah Berlin, Pritchett, Naipaul, Larkin, Powell, e tutti quanti. Celebrity grew inexhaustibly, until Stoppard's own sons found themselves studying their father for 0-level (one got a B, pleasingly). Stoppard's escalation on all fronts is almost funny — I particularly relished the moment when Steven Spielberg sent him a cheque out of the blue for a million bucks, just because he thought Stoppard hadn't been paid enough, The reason it doesn't, in the end, arouse merriment or sour envy is that Stoppard's worldly progress corresponds very exactly to an exciting and solid artistic one.

This is an impressive biography. Stoppard characteristically said that he would like his biography to be as inaccurate as possible, but I think Ira Nadel has done a very plausible job of work. An American biographer will always seem to the English reader to be unhelpfully expansive on the subject of Stoppard's New York successes, but on the other hand it is extremely interesting to hear about Stoppard's American

screenplays. One had forgotten how much he had worked on, and how many turn out to be solid, lasting films — Brazil, Empire of the Sun, Indiana Jones, Schindler'sList, as well as the excellent and more obviously characteristic Shakespeare in Love. He has an occasional and mildly irritating habit of praising his own quotations — as X cleverly/ perceptively/ dazzlingly commented'. From time to time, too, you feel that his biographer has let an opportunity to nail Stoppard go by — Rosencrantz wasn't called Exit Rosencrantz and Guildenstern, apparently, because 'I couldn't expose myself to the danger of anybody thinking that I'd thought that a plural subject would take a singular verb'. There, for once, speaks an autodidact with insecurities, but his biographer lets it go. But in general this is a thorough and interesting biography, which does something rather unusual; it makes a good story out of that most unpromising subject, an unqualified and extended triumph.