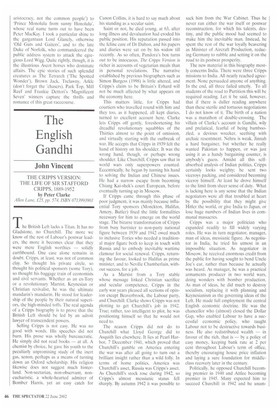 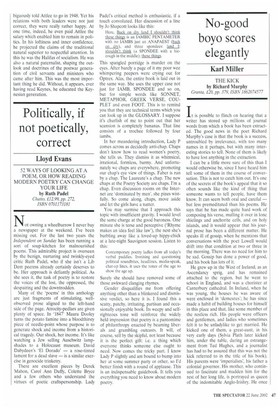 THE CRIPPS VERSION: THE LIFE OF SIR STAFFORD CRIPPS, 1889-1952 by Peter Clarke Allen Lane, #25, pp. 574, ISBN 0713993901 The British Left lacks a Titan. It has no Gladstone, no Churchill. The more we know of the rest of Labour's postwar leaders, the more it becomes clear that they were mere English worthies — solidly earthbound. One case alone remains in doubt. Cripps, at least, was not of common clay. So thought his private circle, so thought his political sponsors (some Tory), so thought his baggage train of economists and civil servants. Whether as an ex-Tory or a revolutionary Marxist, Keynesian or Christian revivalist, he was the ultimate mandarin's mandarin. He stood for leadership of the people by their natural superiors, the high-minded toffs. The real agenda of a Cripps biography is to prove that the British Left should be led by an adroit lawyer of transcendent powers.

Selling Cripps is not easy. He was no good with words. His speeches did not burn. His prose was wholly bureaucratic.

He simply did not read books at all. A chemist by choice, he gave his youth to the peculiarly unpromising study of the inert gas, xenon, perhaps as a means of turning down an Oxford scholarship. His religion likewise does not suggest much hinterland. Non-sectarian, non-observant, noneucharistic, a whole-hearted admirer of Bomber Harris, yet an easy catch for

Canon Collins, it is hard to say much about his standing as a secular saint.

Saint or not, he died young. at 63, after long illness and devaluation had eroded his public position. His reputation passed into the feline care of Dr Dalton, and his papers and diaries were sat on by his widow till recently. As so often, Pandora's box turns out to be innocuous. The Cripps Version is richer in accounts of vegetarian meals than in personal revelations. The narrative established by previous biographers such as Simon Burgess (1998) is little altered, and Cripps's claim to be Britain's Erhard will not be much affected by what appears on the economy here.

This matters little, for Cripps had courtiers who travelled round with him and they too, as it happened, all kept diaries, turned to excellent account here. Clarke lets Cripps off gently, foreshortening his dreadful revolutionary squabbles of the Thirties almost to the point of omission, and virtually starting with the outbreak of war. He accepts that Cripps in 1939 felt the hand of history on his shoulder. It was the wrong hand, though, or perhaps wrong shoulder. Like Churchill, Cripps saw that in world wars only superpowers counted. Eccentrically, he began by turning his hand to solving the Indian and Chinese issues. He had a narrow escape from becoming Chiang Kai-shek's court European, before eventually turning up in Moscow.

If Cripps came through this phase of poor judgment, it was mainly because influential Tory sponsors (Monckton, Halifax, Amery, Butler) fixed the little formalities necessary for him to emerge on the world stage. The bizarre transformation of Cripps from busy barrister to non-party national figure between 1939 and 1942 owed much to inclusive Tories who needed a traditional major figure both to keep in touch with Russia and to embody inevitable wartime clamour for social renewal. Cripps, returning the favour, looked to Halifax as prime minister, and to Neville Chamberlain, without success, for a job.

As a Marxist from a Tory stable whose message linked Christian sacrifice and secular competence, Cripps in the early war years pleased all sections of opinion except Beaverbrook. the Labour party, and Churchill. Clarke shows Cripps was not plotting to get Churchill's job in 1942. True; rather, too intelligent to plot, he was positioning himself so that he would not need to.

The reason Cripps did not do to Churchill what Lloyd George did to Asquith lies elsewhere. It lies at Pearl Harbor, 7 December 1941, which proved that Churchill's gamble on America entering the war was after all going to turn out a brilliant insight rather than a wild folly. In terms of home politics, America was Churchill's asset, Russia was Cripps's asset. As Churchill's stock rose during 1942, so Cripps's almost messianic status fell sharply. By autumn 1942 it was possible to sack him from the War Cabinet. Thus he never ran either the war itself or postwar reconstruction, for which his talents, destiny, and the public mood had seemed to make him the inevitable man. Instead, he spent the rest of the war loyally beavering as Minister of Aircraft Production, reducing Germany to rubble and setting it on the road to its postwar prosperity.

The new material in this biography mostly concerns India. There were three Cripps missions to India. All nearly reached agreement. None persuaded anyone of anything. In the end, all three failed utterly. To all students of the road to Partition this will be required reading. Let it be said, however, that if there is duller reading anywhere than these sterile and tortuous negotiations I do not know of it. The birth of a nation was a marathon of double-crossing. The villain of Clarke's account is Gandhi, wily and prelatical, fearful of being bamboozled, a devious wrecker, seething with archaic resentment. Nehru is weak, Jinnah a hard bargainer, but whether he really wanted Pakistan to happen, or was just using it as a handy bargaining counter, is anybody's guess. Amidst all this selfabsorbed analysis of Indian politics, Cripps certainly looks weighty; he sent two viceroys packing, and considered becoming viceroy himself. At least he drove himself to the limit from sheer sense of duty. What is lacking here is any sense that the Indian negotiators were all that troubled at heart by the possibility that they might give Hitler the world, or give India to Japan, or lose huge numbers of Indian lives in communal massacres.

Cripps was a major politician who expanded readily to fill widely varying roles. He was in turn negotiator, manager, man of ideas, messianic figure. As negotiator in India, he tried his utmost in an impossible situation. As negotiator in Moscow, he received enormous credit from the public for having sought to bend Uncle Joe's ear, rather than because he actually was heard. As manager, he was a practical armaments producer in two world wars, doing wonders with bomber production. As man of ideas, he did much to destroy socialism, replacing it with planning and Keynesianism as the governing ideas of the Left. He made full employment the central English economic doctrine. He was the chancellor who (almost) closed the Dollar Gap, who enabled Labour to have a successful economic policy, who taught Labour not to be destructive towards business. He also redistributed wealth — in favour of the rich, that is — by a policy of easy money, keeping bank rate at 2 per cent throughout Labour's term of office, thereby encouraging house price inflation and laying a sure foundation for middleclass recovery later in the century.

Politically, he opposed Churchill becoming premier in 1940 and Attlee becoming premier in 1945. Many expected him to succeed Churchill in 1942 and he unam biguously told Attlee to go in 1948, Yet his relations with both leaders were not just correct, they were really rather happy. At one time, indeed, he even paid Attlee the salary which enabled him to remain in politics. In his loftiness and inner confidence, he projected the claims of the traditional natural superior to respectful attention. In this he was the Halifax of socialism. He was also a natural paternalist, shaping the outlook and doctrines of the postwar generation of civil servants and ministers who came after him. This was the most important thing he did, Without, it appears, ever having read Keynes, he educated the Keynesian generation.