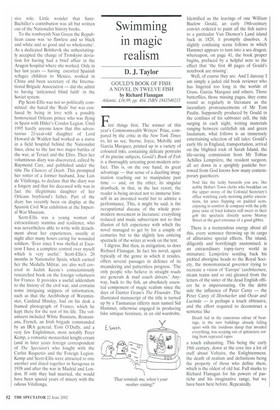 GOULD'S BOOK OF FISH: A NOVEL IN TWELVE FISH by Richard Flanagan Atlantic, £16.99, pp. 404, ISBN 1843540215 First things first. The winner of this year's Commonwealth Writers' Prize, compared by the critic in the New York Times to, let us see, Sterne, Joyce, Melville and Garcia Marquez, printed up in a variety of coloured inks, containing delicate portraits of its piscine subjects, Gould's Book of Fish is a thoroughly arresting post-modern artefact. This is, on the one hand, its great advantage — that sense of a dazzling imagination reaching out to manipulate past time — and, on the other, its singular drawback, in that, in the last resort, the reader is being invited not to immerse himself in an invented world but to admire a performance. This, it might be said, is the occupational disease of the whole postmodern movement in literature: everything reduced and made subservient not to that illusion of felt experience with which the novel managed to get by for a couple of centuries but to the slightly less enticing spectacle of the writer at work on the text.

I digress. But then, in mitigation, so does Richard Flanagan. In fact his novel, again typically of the genre in which it resides, offers several passages in defence of its meandering and patternless progress. 'The only people who believe in straight roads are generals & mail coach drivers.' Anyway, back to the fish, an absolutely essential component of magic realism since the days of Gunter Grass's The Flounder. The illustrated manuscript of the title is turned up by a Tasmanian rifferty man named Sid Hamnnet, otherwise engaged in producing fake antique furniture, in an old wardrobe. Identified as the leavings of one William Buelow Gould, an early 19th-century convict ordered to paint all the fish native to a particular Van Diemen's Land island back in 1828, it promptly dissolves. A slightly confusing scene follows in which Hammet appears to turn into a sea dragon, whereupon, on page 41, the book proper begins, prefaced by a helpful note to the effect that 'the first 40 pages of Gould's notebook are missing'.

Well, of course they are. And I daresay I am simply a jaded old book reviewer who has lingered too long in the worlds of Grass, Garcia Marquez and others. Those butterflies, those missing pages, they come round as regularly in literature as the incendiary pronouncements of Mr Tom Paulin. Supposedly produced by Gould in the confines of his saltwater cell, the tide surging in each night, writing materials ranging between cuttlefish ink and green laudanum. what follows is an immensely entertaining selection of tall tales: Gould's early life in England, transportation, arrival on the blighted rock of Sarah Island, the life-saving commission from Mr Tobias Achilles Lempriere, the resident surgeon, all set down in a sprightly pastiche borrowed from God knows how many contemporary gazetteers:

Nod like the lucky bastards you are, like nobby Hobart Town clerks who breakfast on the upper storey of the Colonial Secretary's office watching early morning public excecutions, fat arses flapping on padded seats, enjoying in comfort & company with the jolly pissy taste of fried kidneys still sweet in their gob the spectacle directly across Murray Street at the gaol entrance of a good gibbet.

There is a tremendous energy about all this, every sentence throwing up its cargo of alliterative special effects. The island, diligently and horrifyingly anatomised, is an extraordinary topsy-turvy world in miniature: Lempriere sending back his pickled aborigine heads to the Royal Society, the monomaniacal governor trying to recreate a vision of 'Europe' (architecture, steam trains and so on) gleaned from the letters of the sister of the dead English officer he is impersonating. On the debit side the influence of Peter Carey — the Peter Carey of Illywhacker and Oscar and Lucinda — is perhaps a touch obtrusive, and the effort required to deconstruct a sentence like

Death hid in the rancorous odour of beatings, in the new buildings already falling apart with the insidious damp that invaded everything, was seeping out of sphincters rotting from repeated rapes

a touch exhausting. This being the early 19th century, down at the core lies a lot of stuff about Voltaire, the Enlightenment, the death of realism and definitions being the property of those who define them, which is the oldest of old hat. Full marks to Richard Flanagan for his powers of pastiche and his imaginative range, but we have been here before. Repeatedly.