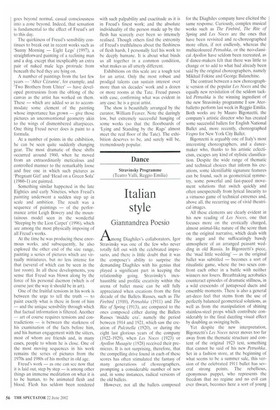 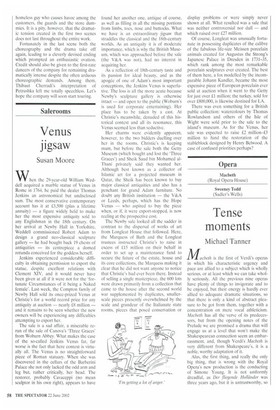 Among Diaghilev's collaborators, Igor Stravinsky was one of the few who never totally fell out with the celebrated impresario, and there is little doubt that it was the composer's ability to surprise the demanding Diaghilev with his genius that played a significant part in keeping the relationship going. Stravinsky's inexhaustible and prolific creativity within the arena of ballet music can be still fully appreciated when creations from the first decade of the Ballets Russes, such as The Firebird (1910), Petrushka (1911) and The Rite of Spring (1913), are compared to the ones composed either during the Ballets Russes 'middle era'. namely the period between 1914 and 1921, which saw the creation of Pulcinella (1920), or during the eight last glorious years of the company (1922-1929), when Les Noces (1923) or Apolion Musagete (1928) received their premieres. It is not surprising, therefore, that the compelling drive found in each of these scores has often stimulated the fantasy of many generations of choreographers, prompting a considerable number of new and, in some instances, radical versions of the old ballets.

However, not all the ballets composed for the Diaghilev company have elicited the same response. Curiously, complex musical works such as The Firebird, The Rite of Spring and Les Noces are the ones that have been revisited and re-choreographed more often, if not endlessly, whereas the multicoloured Petrushka, or the neo-classical Apollon have seldom been recreated, as if dance-makers felt that there was little to change or to add to what had already been said by the original choreographers, namely Mikhail Fokine and George Balanchine.

The contrast between a new choreographic version of the popular Les Noces and the equally new revisitation of the seldom tackled Petrushka is the winning ingredient of the new Stravinsky programme I saw Aterballetto perform last week in Reggio Emilia. Both works are by Mauro Bigonzetti, the company's artistic director who has created some successful ballets for English National Ballet and, more recently, choreographed Vespro for New York City Ballet.

Bigonzetti is arguably one of Italy's most interesting choreographers, and a dancemaker who, thanks to his artistic eclecticism, escapes any kind of stylistic classification. Despite the wide range of thematic and technical choices that inform his creations, some identifiable signature features can be found, such as geometrical symmetry, some powerful and fast-paced movement solutions that switch quickly and often unexpectedly from lyrical linearity to a virtuoso game of technical extremes and, above all, the recurring use of vivid theatrical images.

All these elements are clearly evident in his new reading of Les Noces, one that focuses more on the erotically charged, almost animal-like nature of the score than on the original narrative, which deals with the angst and the suffocatingly bawdy atmosphere of an arranged peasant wedding in old Russia. In Bigonzetti's piece, the -mad little wedding' — as the original ballet was subtitled — becomes a sort of ritualistic game, where the two sexes confront each other in a battle with neither winners nor losers. Breathtaking acrobatics counteract episodes of dramatic stillness, in a wild crescendo of juxtaposed duets and ensemble moments. There is also a general art-deco feel that stems from the use of perfectly balanced geometrical solutions, as well as from the manipulation of shining stainless-steel props which contribute considerably to the final dazzling visual effect by doubling as swinging bells.

Yet despite the new interpretation, Bigonzetti's Les Noces never moves too far away from the thematic structure and content of the original 1923 text, something that cannot be said of his new Petrushka. Set in a fashion store, at the beginning of what seems to be a summer sale, this version of the celebrated 1911 ballet has several strong points. The rebellious, eponymous puppet, who represents the freedom that no regime and no evil can ever thwart, becomes here a sort of young homeless guy who causes havoc among the customers, the guards and the store dummies. It is a pity, however, that the dramatic tension created in the first two scenes does not last throughout the entire work.

Fortunately in the last scene both the choreography and the drama take off again, leading to a cleverly devised ending which prompted an enthusiastic ovation. Credit should also be given to the first-rate dancers of the company for remaining dramatically intense despite the often arduous choreographic demands. Among them, Thibaut Cherradi's interpretation of Petrushka left me totally speechless. Let's hope the company will soon start touring.