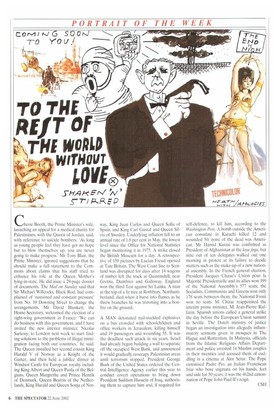 a medical charity for Palestinians, with the Queen of Jordan, said, with reference to suicide bombers: As long as young people feel they have got no hope but to blow themselves up, you are never going to make progress.' Mr Tony Blair, the Prime Minister, ignored suggestions that he should make a full statement to the Commons about claims that his staff tried to enhance his role at the Queen Mother's lying-in-state. He did issue a 29-page dossier of documents. The Mail on Sunday said that Sir Michael Willcocks, Black Rod, had complained of 'sustained and constant pressure' from No. 10 Downing Street to change the arrangements. Mr David Blunkett. the Home Secretary, welcomed the election of a right-wing government in France: 'We can do business with this government, and I have invited the new interior minister, Nicolas Sarkozy, to London next week to start finding solutions to the problems of illegal immigration facing both our countries,' he said. The Queen installed her second cousin King Harald V of Norway as a Knight of the Garter, and then held a jubilee dinner at Windsor Castle for European royalty including King Albert and Queen Paola of the Belgians. Queen Margrethe and Prince Henrik of Denmark, Queen Beatrix of the Netherlands, King Harald and Queen Sonja of Nor

way, King Juan Carlos and Queen Sofia of Spain. and King Carl Gustaf and Queen Silvia of Sweden. Underlying inflation fell to an annual rate of 1.8 per cent in May, the lowest level since the Office for National Statistics began monitoring it in 1975. A strike closed the British Museum for a day. A retrospective of 150 pictures by Lucian Freud opened at Tate Britain. The West Coast line to Scotland was disrupted for days after 14 wagons of timber left the track at Quintinshill. near Gretna. Dumfries and Galloway. England won the third Test against Sri Lanka. A man at the top of a fir tree at Rothbury, Northumberland, died when it burst into flames as he threw branches he was trimming into a bonfire on the ground.

A MAN detonated nail-studded explosives on a bus crowded with schoolchildren and office workers in Jerusalem, killing himself and 19 passengers and wounding 55. It was the deadliest such attack in six years. Israel had already begun building a wall to separate off the occupied West Bank, and announced it would gradually reoccupy Palestinian areas until terrorism stopped. President George Bush of the United States ordered the Central Intelligence Agency earlier this year to conduct covert operations to bring down President Saddam Hussein of Iraq, authorising them to capture him and, if required for self-defence, to kill him, according to the Washington Post. A bomb outside the American consulate in Karachi killed 12 and wounded 50; none of the dead was American. Mr Hamid Karzai was confirmed as President of Afghanistan at the loya jitga, but nine out of ten delegates walked out one morning in protest at its failure to decide matters such as the make-up of a new national assembly. In the French general election, President Jacques Chirac's Union pour la Majorite Presidentielle and its allies won 399 of the National Assembly's 577 seats; the Socialists, Communists and Greens won only 178 seats between them: the National Front won no seats. M. Chirac reappointed the interim prime minister, M. Jean-Pierre Raffarin. Spanish unions called a general strike the day before the European Union summit in Seville. The Dutch ministry of justice began an investigation into allegedly inflammatory sermons given in mosques in The Hague and Rotterdam. In Malaysia, officials from the Islamic Religious Affairs Department and police arrested 14 Muslim couples in their twenties and accused them of cuddling in a cinema at Alor Setar. The Pope canonised Padre Pio. an Italian Franciscan friar who bore stigmata on his hands, feet and side for 50 years; it was the 462nd canonisation of Pope John Paul II's reign.