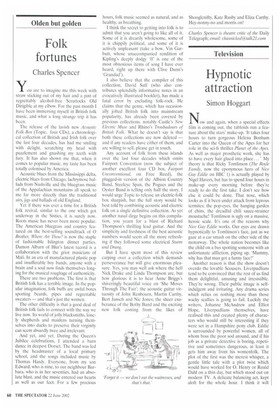 You are to imagine me this week with straw sticking out of my hair and a pint of regrettably alcohol-free Scruttocks Old Dirigible at my elbow. For the past month I have been immersing myself in British folk music, and what a long strange trip it has been.

The release of the lavish new Acoustic Folk Box (Topic, four CDs), a chronological collection of British and Irish folk over the last four decades, has had me smiling with delight, scratching my head with puzzlement and gnashing my teeth with fury. It has also shown me that, when it comes to popular music, my taste has been totally colonised by America.

Acoustic blues from the Mississippi delta, electric blues from Chicago, lachrymose ballads from Nashville and the bluegrass music of the Appalachian mountains all speak to me far more directly than the traditional airs, jigs and ballads of old England.

Yet if there was ever a time for a British folk revival, similar to the one which got underway in the Sixties, it is surely now. Roots music has never been more popular. The American bluegrass and country featured on the best-selling soundtrack of 0 Brother, Where Art Thou? is now the staple of fashionable Islington dinner parties. Damon Albarn of Blur's latest record is a collaboration with the griot musicians of Mali. In an era of manufactured plastic pop and insufferable boy bands, anyone with a brain and a soul now finds themselves longing for the musical roughage of authenticity.

There are two problems. The first is that British folk has a terrible image. In the popular imagination, folk buffs are awful bores sporting beards, pipes and regrettable sweaters — and that's just the women.

The other difficulty is that a good deal of British folk fails to connect with the way we live now. Its world of jolly blacksmiths, lonely shepherds and maidens turning themselves into ducks to preserve their virginity can seem absurdly twee and irrelevant.

And yet, and yet. During the Queen's Jubilee celebrations, I attended a barn dance in deepest Dorset. The band was led by the headmaster of a local primary school, and the songs included music by Thomas Hardy. Everyone, from my son Edward, who is nine, to our neighbour Barbara, who is in her seventies, had an absolute blast, and the music entered our hearts as well as our feet. For a few precious hours, folk music seemed as natural, and as healthy, as breathing.

I think the secret to getting into folk is to admit that you aren't going to like all of it. Some of it is drearily wholesome, some of it is chippily political, and some of it is actively unpleasant (take a bow, Vin Garbutt, whose unaccompanied rendition of Kipling's deeply dodgy 'If' is one of the most obnoxious items of song I have ever heard, right up there with Clive Dunn's `Grandad.).

I also believe that the compiler of this collection, David Suff (who also contributes splendidly informative notes in an evocatively illustrated booklet), has made a fatal error by excluding folk-rock. He claims that the genre, which has occasionally jolted British folk into mainstream popularity, has already been covered by previous collections, notably Castle's New Electric Muse and Rhino's Troubadours of British Folk. What he doesn't say is that both these collections are now deleted — and if any readers have either of them, and are willing to sell, please get in touch.

Any account of folk from these islands over the last four decades which omits Fairport Convention (now the subject of another excellent four CD box, Fairport Unconventional. on Free Reed), the plugged-in version of the Albion Country Band, Steeleye Span, the Pogues and the Oyster Band is telling only half the story. I would urge Topic to release an electric-folk box sharpish, but the full story would be best told by combining acoustic and electric folk on a single definitive collection. As yet another nasal dirge begins on this compilation, you yearn for a blast of Richard Thompson's thrilling lead guitar. And the simplicity and freshness of the best acoustic numbers would seem all the more refreshing if they followed some electrical Sturm und Drang.

But I have spent most of this review carping over a collection which demands perseverance but will give enormous pleasure. Yes, you may well ask where the hell Nick Drake and Linda Thompson are, but how glorious it is to hear Anne Briggs's shiveringly beautiful voice on 'She Moves Through The Fair'; the acoustic guitar virtuosity of John Renbouria, Martin Carthy, Bert Jansch and Nic Jones; the sheer exuberance of the Bothy Band and the exciting new folk coming from the likes of Shooglenifty, Kate Rusby and Eliza Carthy. Hey-nonny-no and morris on!