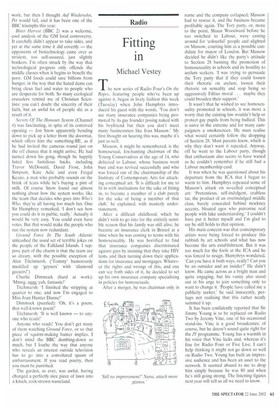 The new series of Radio Four's On the Ropes, featuring people who've been up against it, began in lively fashion this week (Tuesday) when John Humphrys introduced his guest with the words, You don't see many insurance companies being promoted by its gay founder posing naked with his boyfriend but then you don't meet many businessmen like Ivan Massow.' My first thought on hearing this was, maybe it's just as well.

Massow, it might be remembered, is the homosexual, fox-hunting chairman of the Young Conservatives at the age of 14, who defected to Labour, whose business went bust and was revived successfully and who was forced out of the chairmanship of the Institute of Contemporary Arts for attacking conceptual art. 'It is difficult for me to fit in with institutions for the sake of fitting in, to become a member of a club purely for the sake of being a member of that club,' he explained, with masterly understatement.

After a difficult childhood, which he didn't wish to go into for the entirely sensible reason that his family was still alive, he became an insurance clerk in Bristol at a time when he was coming to terms with his homosexuality. He was horrified to find that insurance companies discriminated against gays by insisting that they take HIV tests, and then turning down their applications for insurance and mortgages. Whatever the rights and wrongs of this, and one can see both sides of it, he decided to set up his own insurance company specialising in policies for homosexuals.

After a merger, he was chairman only in name and the company collapsed; Massow had to rescue it, and the business became profitable again. The Tory party, or, more to the point, Shaun Woodward before he too switched to Labour, were casting around for 'colourful' people and alighted on Massow, courting him as a possible candidate for mayor of London. But Massow decided he didn't like the party's attitude to Section 28 banning the promotion of homosexuality in schools and its hostility to asylum seekers. 'I was trying to persuade the Tory party that if they could loosen their rhetoric on asylum, loosen their rhetoric on sexuality and stop being so aggressively Fifties moral . . maybe they could broaden their support.'

It wasn't that he wished to see homosexuality promoted in schools, it was more a worry that the existing law wouldn't help or protect gay pupils from being bullied. This is naive in the extreme and for many campaigners a smokescreen. He must realise what would certainly follow the dropping of Section 28, Most parents know, which is why they don't want it repealed. Anyway. off he went to the Labour party, though that enthusiasm also seems to have waned as he couldn't remember if he still had a Labour membership card.

It was when he was questioned about his departure from the ICA that I began to warm to him. Humphrys repeated some of Massow's attack on so-called conceptual art: 'Pretentious, self-indulgent, craftless tat, the product of an overindulged middle class, barely concealed behind mockney accents, bloated egos who patronise real people with fake understanding.' I couldn't have put it better myself and I'm glad to say he still holds to that opinion.

His main concern was that contemporary artists were being forced to produce this rubbish by art schools and what has now become the arts establishment. But it was too much for the fools at the ICA and he was forced to resign. Humphrys wondered, 'Can you have it both ways, really? Can you be an outsider and an insider?' He didn't know. He came across as a bright man and quite engaging, but his vanity also stood out in his urge to join something only to want to change it. 'People have called me a publicity seeker,' he said innocently, perhaps not realising that this rather neatly summed it up.

It has been confidently reported that Sir Jimmy Young is to be replaced on Radio Two by Jeremy Vine, one of his occasional stand-ins. Vine is a good broadcaster, of course, but he doesn't sound quite right for the ,/Y programme. Young has a warmth in his voice that Vine lacks and, whereas it's fine for Radio Four or Five Live, I can't help thinking it might not go down so well on Radio Two. Young has built an impressive audience and has been an asset to the network. It seemed absurd to me to drop him simply because he was 80 and when he's still going strong. The listening figures next year will tell us all we need to know.