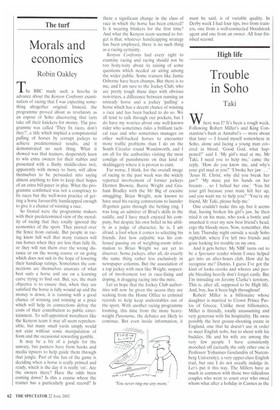 The BBC made such a hoo-ha in advance about the Kenyon Confronts examination of racing that I was expecting something altogether original. Instead, the programme proved about as revelatory as an expose of Soho discovering that tarts take off their knickers for money, The programme was called 'They fix races, don't they?', a title which implied a conspiratorial pulling of horses by corrupt jockeys to achieve predetermined results, and it demonstrated no such thing. What it showed was that trainers, desperately keen to win extra owners for their stables and presented with a flashy middle-class twit, apparently with money to burn, will allow themselves to be persuaded into saying almost anything to him to keep their hopes of an extra bill-payer in play. What the programme confirmed was not a conspiracy to fix races but the well-worn practice of getting a horse favourably handicapped enough to give it a chance of winning a race.

So fixated were the programme makers with their predetermined view of the morality of racing that they totally ignored the economics of the sport. They peered over the fence from outside. But people in racing know full well that many trainers will run horses when they are less than fully fit, or they will run them over the wrong distance or on the wrong course or on going which does not suit in the hope of lowering their handicap ratings. Sometimes the connections are themselves unaware of what best suits a horse and are on a learning curve trying to find out. But, yes, the main objective is to ensure that, when they are satisfied the horse is fully wound up and the money is down, it is running with a good chance of winning and winning at a price which will help its connections defray the costs of their contribution to public entertainment. To self-appointed moralisers like the Kenyon team it may all seem reprehensible, but many small yards simply would not exist without some manipulation of form and the occasional rewarding gamble.

It may be a bit of a jungle for the unwary. but punters have form books and media tipsters to help guide them through that jungle. Part of the fun of the game is deciding when a horse is really primed and ready, which is the day it is really 'on'. Are the owners there? Have the odds been coming down? Is this a course where the trainer has a particularly good record? Is there a significant change in the class of race in which the horse has been entered? Is it wearing blinkers for the first time? And what the Kenyon team seemed to forget is that, whatever handicapping strategy has been employed, there is no such thing as a racing certainty.

Kenyon Confronts had every right to examine racing and racing should not be too hoity-toity about its raising of some questions which needed an airing among the wider public. Some trainers like Jamie Osborne have been chumps. But there is to me, and I am sure to the Jockey Club, who are pretty tough these days with obvious non-triers, a difference between running an unready horse and a jockey 'pulling' a horse which has a decent chance of winning a race and has been backed to do so. We all tend to talk through our pockets, but I do have my worries about one well-known rider who sometimes rides a brilliant tactical race and who sometimes manages on other well-backed horses to encounter more traffic problems than I do on the South Circular round Wandsworth, and I am all for the authorities visiting the most condign of punishments on that kind of skulduggery where it is proven to exist,

Far worse, I think, for the overall image of racing in the past week was the widely reported involvement of former jockeys Dermot Browne, Barrie Wright and Graham Bradley with the Mr Big of cocaine smuggling, Brian Wright, now known to have used his racing connections to launder ill-gotten gains through the betting ring. was long an admirer of Brad's skills in the saddle, and I have much enjoyed his company, but despite his own belief in his ability as a judge of character, he is, I am afraid, a fool when it comes to selecting his friends. Just how culpable was his confessed passing on of weighing-room information to Brian Wright we are yet to discover. Some jockeys, after all, do exactly the same thing rather less exclusively in newspaper columns. But the association of a top jockey with men like Wright, suspected of involvement too in race-fixing and doping, is dragging racing into the mire.

Let us hope that the Jockey Club authorities will now be given the access they are seeking from the Home Office to criminal records to help keep undesirables out of the sport. With another racing programme looming, this time from the more heavyweight Panorama, the debates are likely to continue. But even inside information, it

must be said, is of variable quality. In Derby week I had four tips, two from trainers, one from a well-connected bloodstock agent and one from an owner. All four finished second.