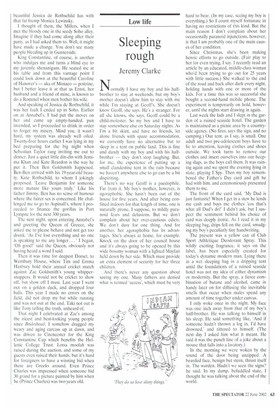 Normally I have my boy and his halfbrother to stay at weekends, but my boy's mother doesn't allow him to stay with me while I'm staying at Geoffs. She doesn't know Geoff, she says, He's a stranger. For all she knows, she says, Geoff could be a child-molester. So my boy and I have to stay somewhere else on Saturday nights. As I'm a bit skint, and have no friends, let alone friends with spare accommodation, we currently have no alternative but to sleep in a tent on public land. This is fine and dandy with my boy and with his halfbrother — they don't stop laughing. But, for me, the experience of putting up a small clandestine tent in the rain because we haven't anywhere else to go can be a bit dispiriting.

There's no way Geoff is a paedophile. Far from it. My boy's mother, however, is agoraphobic. She hasn't been out of the house for five years. And after being confined indoors for that length of time, one is naturally prone, I suppose, to mildly paranoid fears and delusions. But we don't complain about her over-cautious edicts. We don't dare for one thing. And for another, her agoraphobia has its advantages. She's always at home, for example. Knock on the door of her council house and it's always going to be opened by this wide bosomy woman with a lighted Mayfair held down by her side. Which must provide an extra element of security for her three children.

And there's never any question about seeing my one. Many fathers are denied what is termed 'access', which must be very hard to bear, (In my case, seeing my boy is everything.) So I count myself fortunate in having no restrictions of this kind. But the main reason I don't complain about her occasionally paranoid injunctions, however, is that I am probably one of the main causes of her condition.

Since Christmas, she's been making heroic efforts to go outside. (Fair play to her for even trying, I say. I recently read an article by an educated, middle-class woman who'd been trying to go out for 25 years with little success.) She walked to the end of the road and back after dark every night, holding hands with one or more of the kids. For a time this was so successful she bought a second-hand mobile phone. The experiment is temporarily on hold, however, until the nights start drawing in again.

Last week the lads and I slept in the garden of a ruined seaside hotel. The garden is maintained as a picnic area by a countryside agency, (No fires, says the sign, and no camping.) Our tent, as I say, is small. One adult and two pre-adolescent boys have to lie to attention, leaving clothes and shoes outside. We took turns to remove our clothes and insert ourselves into our beeping slags, as the boys call them. It was raining again and we spent the evening lying in state, playing I Spy. Then my boy remembered the Father's Day card and gift he had with him, and ceremoniously presented them to me.

The front of the card said, 'My Dad is just fantastic! When I get in a stew he lends me cash and buys me clothes 'cos that's what all Dad's do!' I didn't ask, but I suspect the sentiment behind his choice of card was deeply ironic. As I read it in my sleeping bag, drips fell on the card, smudging my boy's peculiarly tiny handwriting.

The present was a yellow can of Club Sport Athletique Deodorant Spray. This wildly exciting fragrance, it says on the label, has been especially created for today's dynamic modern man. Lying there in a wet sleeping bag in a dripping tent amid the foundations of a ruined seaside hotel was not my idea of either dynamism or modernity. But the spray, a fierce combination of butane and alcohol, came in handy later on for diffusing the inevitable smells that occur when males spend any amount of time together under canvas.

I only woke once in the night. My face was one inch away from that of my boy's half-brother. He was talking to himself in his sleep. He said something like, 'And if someone hadn't thrown a log in, I'd have drowned,' and tittered to himself. (The next day I asked him what it meant. He said it was the punch line of a joke about a mouse that falls into a lavatory.)

In the morning we were woken by the sound of the door being unzipped. A bearded face, benign but stern, thrust itself in. The warden. Hadn't we seen the signs? he said. In my damp, befuddled state, I thought he was talking about the end of the world.