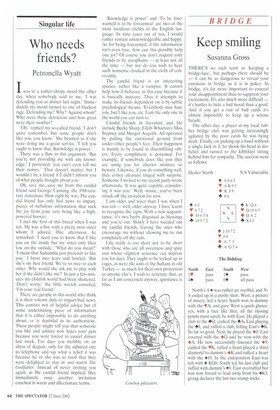 I was in a rather chirpy mood the other day, when somebody said to me, 'I was defending you at dinner last night.' Immediately my mood turned to one of blackest rage. Defending me? Why? Against whom? Who were these detractors and how great were their number?

'Oh,' replied my so-called friend, 'I don't quite remember, but some people don't like you, you know.' She beamed as if she were doing me a great service. 'I felt you ought to know that. Knowledge is power.'

There was a flaw in this argument. 'But you're not providing me with any knowledge,' I protested; 'you can't even tell me their names.' That doesn't matter, but I wouldn't be a friend if I didn't inform you of what people thought about you.'

Oh, save me, save me from the candid friend said George Canning, the 19th-century statesman. How right he was. The candid friend has only had news to impart, pieces of nebulous information that suck the joy from your very being like a highpowered hoover.

I met the first of this breed when I was ten. He was a boy with a pretty twin sister whom I adored. One afternoon, he remarked, 'I need you to know that I like you on the inside but my sister only likes you on the outside.' What do you mean?' 'I mean that Samantha just pretends to like you.' I burst into tears and howled, 'But she's my best friend. We're so nice to each other. Why would she ask me to play with her if she didn't like me?' In just a few minutes my childish world had been shattered. 'Don't worry,' the little wretch consoled, 'I'm your real friend.'

There are people in this world who think it is their solemn duty to impart bad news. This consists not of helpful advice but of some undermining piece of information that it is either impossible to do anything about, or is doubtful in its authenticity. These people might tell you that someone you like and admire now hates your guts because you were forced to cancel dinner last week. For days you tremble on an abyss of despair, only for the admired one to telephone and say what a relief it was because he or she was so tired that they were delighted to stay in and watch The Godfather. Instead of never inviting you again, as the candid friend implied, they immediately issue another invitation couched in warm and affectionate terms. 'Knowledge is power' and 'To be forewarned is to be forearmed' are two of the most invidious clichés in the English language. In nine cases out of ten, I would rather remain unknowledgeable and happy. As for being forearmed, if the information isn't even true, how can this possibly help one jot? Of course you don't require your friends to be sycophants — at least not all the time but nor do you wish to hear such nonsense cloaked in the cloth of conviviality.

The candid friend is an interesting species, rather like a vampire. It cannot help how it behaves; in this case because it is basically insecure. Thus it attempts to make its friends dependent on it by subtle psychological means. 'Everybody may hate you, but I like you, etc. I am the only one in the world you can turn to.'

Candid friends in literature and life include Becky Sharp, Edith Wharton's Miss Stepney and Margot Asquith. All operated by pulling the emotional ground from under other people's feet. Their happiness is mainly to be found in discomfiting others. Every compliment is poisoned. For example, if somebody does like you they are using you for ulterior motives, so beware. Likewise, if you do something well, they evince pleasure tinged with surprise. Someone 1 invited to my recent party wrote afterwards, 'It was quite capable, considering it was you.' Well, missie, you've been struck off the invitation list now.

I am older and wiser than I was when I was ten — well, older anyway. I have learnt to recognise the signs. With a new acquaintance, it's two barbs disguised as blessings and you're out. Slowly I have weeded out my candid friends, leaving the ones who encourage me without allowing me to run completely off the rails.

Life really is too short not to be short with those who are all sweetness and spite and whose slightest sentence can depress you for days. They ought to be locked up in cages, as were the sons of the Sultans in old Turkey — as much for their own protection as anyone else's. I wish to reiterate that, as far as I am concerned anyway, ignorance is bliss.