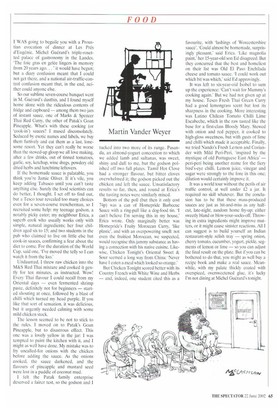 I WAS going to beguile you with a Proustian evocation of dinner at Les Pres d'Eugdnie. Michel Guerard's triple-rosetted palace of gastronomy in the Landes. 'The foie gras en gelee lingers in memory from 20 years ago. .. 'it would have begun; but a diary confusion meant that I could not get there, and a national air-traffic-control confusion meant that, in the end, neither could anyone else.

So our sublime seven-course banquet went in M. Guerard's dustbin, and I found myself home alone with the ridiculous contents of fridge and cupboard — among them two jars of instant sauce, one of Marks & Spencer Thai Red Curry, the other of Patak's Goan Pineapple. What's with these cooking (or 'cook-in) sauces? I mused disconsolately. Seduced by exotic names and labels, we buy them furtively and eat them as a last, lonesome resort. Yet they can't really be worse than the stewed-up gloop we all love making, after a few drinks, out of tinned tomatoes, garlic, soy, ketchup, wine dregs, powdery old dried herbs and lunchtime leftovers.

If the homemade sauce is palatable, you think you're Jamie Oliver. If it's vile, you keep adding Tabasco until you can't taste anything else. Surely the food scientists can do better, I thought. I set off to find out, but a Tesco tour revealed too many choices even for a seven-course trencherman, so I recruited some help: my teenage godson, a notably picky eater; my neighbour Erica, a superb cook who usually works only with simple, natural ingredients; her four children aged six to 15; and two students in the pub who claimed to live on little else but cook-in sauces, confirming a fear about the diet to come. For the duration of the World Cup, said one, 'I've moved the telly so I can watch it from the loo.'

Undaunted, I threw raw chicken into the M&S Red Thai mixture and cooked it gently for ten minutes, as instructed. Wow! Every. Thai flavour I could recall from my Oriental days — even fermented shrimp paste, definitely not for beginners — started shouting at once, followed by a blast of chilli which turned my head purple. If you like that sort of sensation, it was delicious, but it urgently needed calming with some mild chicken stock.

The lesson seemed to be not to stick to the rules. I moved on to Patak's Goan Pineapple, but to disastrous effect. This one was a lovely yellow in the jar: I was tempted to paint the kitchen with it, and I might as well have done. My mistake was to fry uncalled-for onions with the chicken before adding the sauce. As the onions cooked, the sauce darkened, and the flavours of pineapple and mustard seed were lost in a puddle of coconut mud.

I felt the Patak family enterprise deserved a fairer test, so the godson and I tucked into two more of its range. Pasanda, an almond-yogurt concoction to which we added lamb and sultanas, was sweet, shiny and dull to me, but the godson polished off two full plates. Tamil Hot Clove had a stronger flavour, but bitter cloves overwhelmed it; the godson picked out the chicken and left the sauce. Unsatisfactory results so far, then, and round at Erica's the tasting notes were similarly mixed.

Bottom of the poll (but then it only cost 74p) was a can of Homepride Barbecue Sauce with a ring-pull like a dog-food tin. 'I can't believe I'm serving this in my house,' Erica wrote. Only marginally better was Homepride's Fruity Moroccan Curry, 'like plastic'. and with an overpowering smell: not even the fruitiest Moroccan. we suspected, would recognise this jammy substance as having a connection with his native cuisine. Likewise, Chicken Tonight's Oriental Sweet & Sour seemed a long way from China: 'Never have I eaten a meal which looked so orange.'

But Chicken Tonight scored better with its Country French with White Wine and Herbs — and, indeed, one student cited this as a favourite, with 'lashings of Worcestershire sauce'. 'Could almost be homemade, surprisingly pleasant.' said Erica. 'Like magnolia paint.. her 15-year-old son Ed disagreed. But they concurred that the best and homeliest on their list was Old El Paso Enchilada cheese and tomato sauce. could work out which bit was which,' said Ed approvingly.

It was left to six-year-old Isobel to sum up the experience: 'Can't wait for Mummy's cooking again.' But we had not given up at my house. Tesco Fresh Thai Green Curry had a good lemongrass scent but lost its sharpness in the cooking. More interesting was Latino Chilean Tomato Chilli Lime Escabeche, which in the raw tasted like the base for a first-class Bloody Mary. Stewed with onion and red pepper, it cooked to high-gloss sweetness, but with gusts of lime and chilli which made it acceptable. Finally, we tried Nando's Fresh Lemon and Coriander with Mild Pen-Pen, 'inspired by the mystique of old Portuguese East Africa' — pen-pen i being another name for the fiery bird's-eye chilli. Lemon juice, vinegar and sugar were strongly to the fore in this one; dilution would certainly improve it.

It was a world tour without the perils of air traffic control, at well under £2 a jar. It required no skill whatever. But the conclusion has to be that these mass-produced sauces are just as hit-and-miss as any halfcut, late-night, random home fry-up: either sweetly bland or blow-your-socks-off. Throwing in extra ingredients might improve matters, or it might cause sinister reactions. All I can suggest is to build yourself an Indian restaurant-style relish tray — spring onion, cherry tomato, cucumber, yogurt, pickle, segments of lemon or lime — so you can adjust the final result on the plate. But if you can be bothered to do that, you might as well buy a recipe book and make a real sauce. Meanwhile, with my palate thickly coated with overspiced, oversweetened glue, it's lucky I'm not dining at Michel Guarard's tonight.