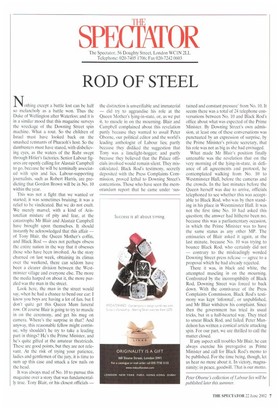 Nothing except a battle lost can be half so melancholy as a battle won. Thus the Duke of Wellington after Waterloo: and it is in a similar mood that this magazine surveys the wreckage of the Downing Street spin machine. What a rout. So the children of Israel must have looked back on the smashed remnants of Pharaoh's host. So the dambusters must have stared, with disbelieving eyes, as the waters of the Ruhr swept through Hitler's factories. Senior Labour figures are openly calling for Alastair Campbell to go, because he will be terminally associated with spin and lies. Labour-supporting journalists, such as Robert Harris, are predicting that Gordon Brown will be in No. 10 within the year.

This was not a fight that we wanted or started; it was sometimes bruising; it was a relief to be vindicated. But we do not exult. We merely marvel, with a kind of Aristotelian mixture of pity and fear, at the catastrophe Mr Blair and Alastair Campbell have brought upon themselves. It should instantly be acknowledged that this affair — of Tony Blair, the Queen Mother's coffin, and Black Rod — does not perhaps obsess the entire nation in the way that it obsesses those who have been involved. As the story churned on last week, obtaining its climax over the weekend, there can seldom have been a clearer division between the Westminster village and everyone else. The more the media harped on about it, the more puzzled was the man in the street.

Look here, the man in the street would say, when he had a chance to bend our ear: 1 know you boys are having a lot of fun, but 1 don't quite get this Queen Mum funeral row. Of course Blair is going to try to muscle in on the ceremony, and get his mug on camera. Where's the surprise in that? And anyway, this reasonable fellow might continue, why shouldn't he try to take a leading part in things? He's the Prime Minister, and he's quite gifted at the amateur theatricals. These are good points, but they are not relevant. At the risk of trying your patience, ladies and gentlemen of the jury, it is time to sum up this case and smack a few nails on the head.

It was always mad of No. 10 to pursue this magazine over a story that was fundamentally true. Tony Blair, or his closest officials — the distinction is unverifiable and immaterial — did try to aggrandise his role at the Queen Mother's lying-in-state, or, as we put it, to muscle in on the mourning. Blair and Campbell complained about this revelation partly because they wanted to assail Peter °borne, our political editor and the world's leading anthologist of Labour lies; partly because they disliked the suggestion that Tony was a limelight-hogger; and partly because they believed that the Palace officials involved would remain silent. They miscalculated. Black Rod's testimony, secretly deposited with the Press Complaints Commission, proved lethal to Downing Street's contentions. Those who have seen the memorandum report that he came under 'sus tamed and constant pressure' from No. 10. It seems there was a total of 24 telephone conversations between No. 10 and Black Rod's office about what was expected of the Prime Minister. By Downing Street's own admission, at least one of these conversations was punctuated by an expression of surprise, by the Prime Minister's private secretary, that his role was not as big as she had envisaged.

What made Mr Blair's position finally untenable was the revelation that on the very morning of the lying-in-state, in defiance of all agreements and protocol, he contemplated walking from No. 10 to Westminster Hall, before the cameras and the crowds. In the last minutes before the Queen herself was due to arrive, officials telephoned to see whether this was acceptable to Black Rod, who was by then standing in his place in Westminster Hall. It was not the first time No. 10 had asked this question; the answer had hitherto been no, because this was a parliamentary occasion, in which the Prime Minister was to have the same status as any other MP. The emissaries of Blair asked it again, at the last minute. because No. 10 was trying to bounce Black Rod, who certainly did not — contrary to the misleadingly worded Downing Street press release — agree to a proposal which he had already rejected.

There it was, in black and white, the attempted muscling in on the mourning. Confronted by the incorruptibility of Black Rod, Downing Street was forced to back down. With the connivance of the Press Complaints Commission, Black Rod's testimony was kept 'informal', or unpublished, and Mr Blair withdrew his complaint. Since then the government has tried its usual tricks, but in a half-hearted way. They tried to smear Black Rod, and failed. Peter Mandelson has written a comical article attacking spin. For our part, we are thrilled to call the matter closed.

If any aspect still troubles Mr Blair, he can always exercise his prerogative as Prime Minister and call for Black Rod's memo to be published. For the time being, though, let us hear no more about it. In victory, magnanimity; in peace, goodwill. That is our motto.

Peter Oborne's collection of Labour lies will be published later this summer.