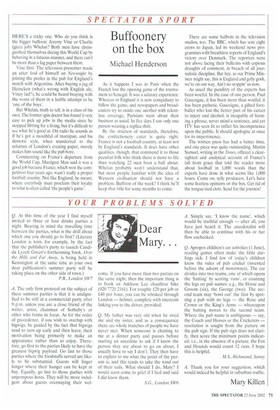 Buffoonery on the box

HERE'S a tricky one. Who do you think is the bigger buffoon: Jeremy Vine or Charlie (gizza job) Whelan? Both men have distinguished themselves during this World Cup by behaving in a fatuous manner, and there can't be more than a fag paper between them.

Vine first. The television presenter made an utter fool of himself on Newsnight by joining the proles in the pub for England's match with Argentina. After buying a jug of Heineken (what's wrong with English ale, Viney lad?), he could be heard braying with the worst of them in a feeble attempt to be 'one of the boys'.

But Whelan, truth to tell, is in a class of his own. The former spin doctor has found it very easy to pick up jobs in the media since he stopped fibbing for a living, but it's difficult to see what he's good at. On radio he sounds as if he's got a mouthful of marzipan, and his demotic style, when transferred to the columns of London's evening paper, merely makes him sound like the pub bore.

Commenting on France's departure from the World Cup, Marzipan Man said it was a good job because France, which won the competition four years ago, wasn't really a proper football country. Not like England, he meant, where everybody must proclaim their loyalty to what is often called 'the people's game'. As it happens I was in Paris when the French lost the opening game of the tournament to Senegal. It was a salutary experience. Whereas in England it is now compulsory to follow the game, and newspapers and broadcasters try to outdo one another with relentless coverage, Parisians went about their business as usual. In five days I saw only one person wearing a replica shirt.

By the strictest of standards, therefore, the confectionery eater is quite right. France is not a football country, at least not by England's standards. It does have other qualities, though, that commend it to those peculiar folk who think there is more to life than watching 22 men boot a ball about. Whelan probably won't understand that, but most people familiar with the idea of Western civilisation should not have a problem. Buffoon of the week? [think he'll keep that title for some months to come. There are some halfwits in the television studios, too. The BBC, which has sent eight crews to Japan, led its weekend news programmes with breathless reports of England's victory over Denmark. The reporters were not above lacing their bulletins with copious draughts of comment, in breach of all journalistic discipline. But hey, as our Prime Minister might say, this is England and golly gosh, we're on our way. Ain't no stoppin' us now.

As usual the punditry of the experts has been woeful. In the case of one person, Paul Gascoigne, it has been more than woeful; it has been pathetic. Gascoigne, a gifted footballer who lost the better part of his career to injury and alcohol, is incapable of forming a phrase, never mind a sentence, and yet ITV has seen fit to inflict his incompetence upon the public. It should apologise at once for its impertinence.

The written press has had a better time, and one piece was quite outstanding. Martin Samuel, writing in the Times, offered a clearsighted and analytical account of France's fall from grace that told the reader more about football in 1,000 words than the experts have done in what seems like 1,000 hours. Come on, telly producers. Let's have some fearless opinions on the box. Get rid of the tongue-tied clots. Send for the journos!