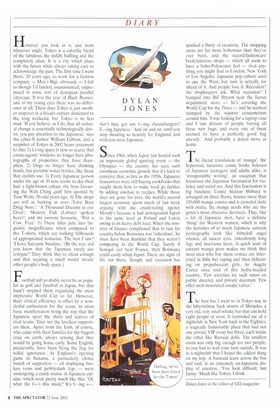 H owever you look at it, and from whatever angle. Tokyo

is a calorific blend of the fabulous, the mildly baffling and the completely alien. It is a city which plays with the future while always taking care to acknowledge the past. The first time I went there, 20 years ago, to work for a fashion company — Men's Bigi, obviously — I felt as though I'd landed, unannounced, unprepared in some sort of dystopian parallel cityscape. It was the year of Blade Runner, and to my young eyes there was no difference at all. These days Tokyo is just another stopover in a leisure culture dedicated to the long weekend; but Tokyo is no less mad. 'If you believe, as I do, that all cultural change is essentially technologically driven, you pay attention to the Japanese,' says the cyber-fi author William Gibson, and a snapshot of Tokyo in 2002 bears testament to this: I) Living space is now so scarce that estate-agents' windows no longer have photographs of properties; they have floorplans. 2) Dogs no longer have drinking bowls, but portable water bottles, like those that cyclists use. 3) Every Japanese person under the age of 30 now seems to dye their hair a light-brown colour, the boys favouring the Wah Ching quiff first spotted by Tom Wolfe 30-odd years ago. 4) The shops are still as barking as ever: 'Love Boat Drug Store'; 'A Thousand Dreams in our Oven'; 'Monroe Fish (Lobster spoken here)'; and my current favourite, 'Win a Cow, Free'. 5) These titles pale into linguistic insignificance when compared to the T-shirts, which are walking billboards of appropriated nonsense. The best I saw? 'I Love Sarcastic Sundays.' (By the way, did you know that the Japanese rarely use cologne? They think they're clean enough and that wearing a smell would invade other people's body space.) Football will probably never be as popular as golf and baseball in Japan, but that hasn't stopped them organising the most impressive World Cup so far. However, their clinical efficiency is offset by a wonderful enthusiasm for the event, its most basic manifestation being the way that the Japanese sport the shirts and scarves of rival teams. They are the loveliest supporters there. Apart from the Irish, of course, who came with their families for the biggest craic on earth, always sensing that they would be going home early. Some English, predictably, have been flying the flag for wilful ignorance. At England's opening game in Saitama, a particularly choice bunch of supporters — all displaying broken veins and pebbledash legs — were undergoing a crash course in Japanese cuisine, which went pretty much like this: '01, what the f--s this muck? It's f—lag s—.

Ain't they got any f—ing cheeseburgers? F—ing Japanese.' And on and on, until you stop shouting so heartily for England, and wish you were Japanese.

Since 1964, when Japan last hosted such an important global sporting event — the Olympics — the country has seen such enormous economic growth that it's hard to conceive that, as late as the 1950s, Japanese housewives were still buying cookbooks that taught them how to make food go further by adding sawdust to recipes. While those days are gone for ever, the world's second largest economy spent much of last week arguing with the credit-rating agency Moody's because it had downgraded Japan to the same level as Poland and Latvia owing to its heavy debt load. When the minister of finance complained that to rate his country below Botswana was 'ridiculous', he must have been thankful that they weren't competing in the World Cup. Surely if Senegal can beat France, then Botswana could easily whup Japan. There are signs of life out there, though, and recession has

sparked a flurry of creativity. The shopping areas are far more bohemian than they've ever been, and the record/fashion/art/ book/interiors shops — which all seem to have a boho-Polynesian feel — rival anything you might find in London, New York or Los Angeles. Japanese pop culture used to ape the West, but now is actually far ahead of it. And people love it. Recession? the shopkeepers ask. What recession? I bumped into Bill Bryson near the Isetan department store — he's covering the World Cup for the Times — and he seemed stumped by the wanton consumerism around him. 'I was looking for a laptop case and I saw dozens of people buying all these new bags, and every one of them seemed to have a perfectly good bag already.' And probably a dozen more at home.

The literal translation of 'manga', the hyperreal, futuristic comic books beloved of Japanese teenagers and adults alike, is 'irresponsible writing', an escapism that harnesses the Japanese fascination for violence and weird sex. And this fascination is big business: Comic Station Shibuya is arranged on three floors, houses more than 150,000 manga comics and is crowded daily with otaku, the manga nerds who are the genre's most obsessive devotees. They, like a lot of Japanese men, have a definite 'thing' for Western women, which is why the heroines of so much Japanese cartoon pornography look like babydoll angel whores, all saucer eyes, ridiculously long legs and lascivious leers. A quick scan of current manga porn makes me think that most men who buy these comics are interested in little but raping and then defecating on prepubescent girls. As Angela Carter once said of this hydra-headed country, 'Few societies lay such stress on public decency and private decorum. Few offer such structured escape valves.'

The best bar [went to in Tokyo was in the labyrinthine back streets of Shinjuku, a very old, very small whisky bar that can hold eight people at most. It reminded me of a nightclub in New York back in the Eighties, a tragically fashionable place that had not one private VIP room but three, each inside the other like Russian dolls. The smallest room was only big enough for two people, so you had to wait your turn outside. It was in a nightclub that I heard the oddest thing on my trip. A barmaid leant across the bar and said, in an extremely un-Japanese display of emotion, 'You look difficult, but funny.' Much like Tokyo, I think.

Dylan Tones is the editor of GO magazine.