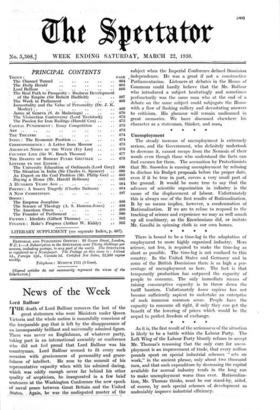 As it is, the first result of the seriousness of

the situation is likely to be a battle within the Labour Party. The Left Wing of the Labour Party bluntly refuses to accept Mr. Thomas's reasoning that the only cure for unem- ployment is an improvement of trade; - that every million pounds spent on special industrial schemes "sets on work," in the ancient phrase, only about two thousand men, and that such expenditure by decreasing the capital available for normal industry tends in the long run to make unemployment worse than ever. Rationaliza- tion, Mr. Thomas thinks, must be our stand-by, aided, of course, by such special schemes of development as undeniably improve industrial efficiency.