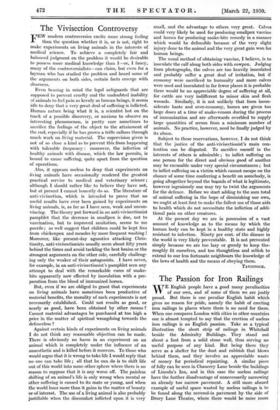 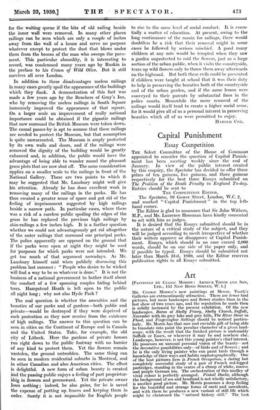 The Passion for Iron Railings

WE English people have a good many :peculiarities of our own, and of some of them we are justly proud. But there is one peculiar English: habit which gives no reason for pride, namely the habit of ereeting iron railings in places where there is, no need for them: When one compares London with cities in other countries one is almost tempted to say that the erection of useless iron railings is an English passion. Take as a typical illustration the short strip of railings in Whitehall beside " the Admiralty Buildings. They stand out about a foot from a solid stone wall, thus serving no useful purpose of any kind. But being there they serve as a shelter for the dust and rubbish that blows behind them, and they involve an appreciable waste of money for periodical repainting. A similar piece of folly can be seen in Chancery Lane beside the buildings of Lincoln's Inn, and in this case the useless railings have the further disadvantage of unnecessarily narrowing an already too " narrow pavement. A still more absurd example of useful space wasted by useless railings is to be found along the covered-in pavement by the side of Drury Lane Theatre, where there would be - more room for the waiting queue if the bits of old railing beside the inner wall were removed. In many other places railings can be seen which are only a couple of inches away from the wall of a house and serve no purpose whatever except to protect the dust that blows under them from the broom of the man who sweeps the pave- ment. This particular absurdity, it is interesting to record, was condemned many years ago by Ruskin in the preface to his Crown of Wild Olive. But it still survives all over London.

In addition to these disadvantages useless railings in many ales greatly spoil the appearance of the buildings WhiCh they flank. A demonstration of this fact was made a few years ago by the Benchers of Gray's Inn, who by removing the useless railings in South Square immensely improved the appearance of that square. On a larger scale an improvement of really national importance could be obtained if the gigantic railings that' now surround the British Museum were taken down. The casual passer-by is apt to assume that these railings Are needed to protect the Museum, but that assumption is quite unwarranted. The Museum is amply protected by its own walls and doors, and if the railings were removed the dignity of the building would be greatly enhanced and, in addition, the public would have the advantage of being able to wander round the pleasant grass plots that are now shut off. The same consideration Applies On a smaller scale to the railings in front of the National Gallery. These are two points to which it may be suggested that Mr. Lansbury might well give its 'attention. Already he has done excellent work in iemoving many of the railings in the parks. He has thus created a greater sense of space and got rid of the feeling of imprisonment suggested by high railings beside a narrow path. In particular cases, where there was a risk of a careless public spoiling the edges of the grass he has replaced the previous high railings by shin-railings a few inches high. It is a further question whether we could not advantageously get rid altogether of the outer railings that surround our principal parks. The police apparently are opposed on the ground that if the parks were open at night they might be used for 'purposes for which parks were not intended. We get too much of that argument nowadays. As Mr. Lansbury himself said when publicly discussing this problem last summer : " People who desire to be wicked will find a way to be so whatever is done." It is not the business of a national government to bother itself about the conduct of a few spooning couples hiding behind trees. Hampstead Heath is left open to the public all night long ; why not also Hyde Park ?

The real question is whether the amenities and the beauties of our parks and of gardens—both public and private--would be destroyed if they were deprived of such protection as they now receive from the existence of high railings. The answer to this question can be seen in cities on the Continent of Europe and in Canada and the United States. Take, for example, the old city of Lubeck. Here the gardens of private houses run right down to the public footway with no barrier of any kind to protect them. Yet the flowers remain unstolen, the ground untrodden. The same thing can be seen in modern residential suburbs in Montreal, and in other Canadian and also American cities. The effect is delightful. A new form of urban beauty is created sgild the passing public enjoys a feeling of part proprietor- 6iR in flowers and greensward. Yet the private owner loses nothing ; indeed, he also gains, for he is saved the expense of putting up fences and keeping them in order. Surely it is not impossible for. English people to rise to the same level of social conduct. It is essen- tially a matter of education. At present, owing to the long continuance of the mania for railings, there would doubtless be a risk that their removal might in some cases be followed by serious mischief. A good many children at any rate would be tempted when they saw a garden unprotected to raid the flowers, just as a large section of the urban public, when it visits the countryside, tears up wild flowers only to throw them away afterwards on the highroad. But both these evils could be prevented if children were taught at school that it was their duty to help in preserving the beauties both of the countryside and of the urban garden, and if the same lesson were conveyed to their parents by substantial fines in the police courts. Meanwhile the mere removal of the railings would itself tend to create a higher social sense; for it would give all of us 'a personal interest in preserving beauties which all of us were permitted to enjoy.