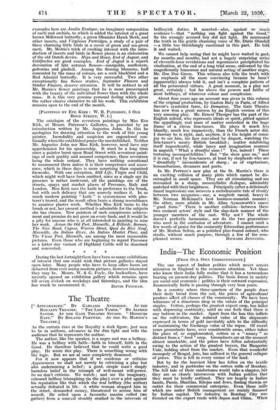 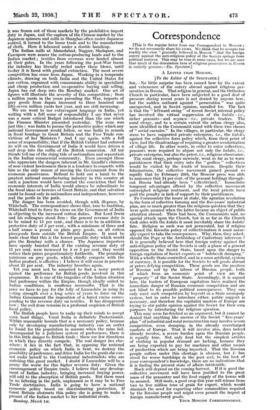 [FROM OUR OWN CORRESPONDENT.]

The one aspect of Indian politics which never arrests attention in England is the economic situation. Yet those who know their _India fully realize that it has a tremendous bearing on present-day politics. The basic forces in society are social and economic ; politics is their outward expression. Economically India is passing through very lean years.

In a country where three-quarters of the people . draw their daily bread from the soil, the prices of agricultural produce affect all classes of the community. We have been witnesses of a disastrous drop in the values of the principal staples. Cotton, perhaps the greatest export crop, has fallen with depressing continuity, until no one feels that there is any bottom in the market. Apart from the loss this inflicts on the cultivators, the reduced value of the shipments expressed in terms of gold inevitably adds to the difficulty of maintaining the Exchange value of the rupee. Of recent years groundnuts have, over considerable areas, either taken the place of, or supplemented, cotton as a " money " as distinct from a " food crop. Groundnuts are at the moment almost unsaleable, and the prices have fallen substantially owing to the action of the greatest buyers, the Margarine Unie, holding aloof from the market. Even that wonderful monopoly of Bengal, jute, has suffered in the general collapse of prices. This is felt in every corner of the land.

But by far the heaviest blow has fallen on the textile industry, and in particular on the cotton mills of Bombay. The full tale of their misfortunes would take a chapter, but they are so closely interwoven with Indian politics that they must be briefly outlined: They are- largely in Indian hands, Parsis, Bhattias, Khojas and Jews, finding therein an outlet for their commercial enterprise. Even those mills which are under British management are mainly financed by Indian capital. The industry in Bombay City was founded on the export-trade with Japan and China. When it was frozen out of those markets by the prohibitive import duty in Japan, and the capture of the Chinese market by the Japanese spinners and mills in Shanghai often under Japanese control, it turned to the home trade and to the manufacture of cloth. Here it laboured under a double handicap.

The Indian mills at Ahmedabad, Nagpur, Sholapore, and Cawnpore were nearer the cotton-producing lands and to the Indian market ; textiles from overseas were landed almost at their gates. In the years following the post-War boom the industry has literally reeled under these blows, until to-day it is faced with gradual extinction. The most severe competition has come from Japan. Working in a temperate climate, drawing on both India and the United States for raw cotton, organized with consummate ability in specialized and cheap production and co-operative buying and selling, Japan has cut deep into the Bombay market. One set of figures will illustrate' the severity of this competition ; from a million yards in the years preceding the War, imports of grey goods from Japan increased to three hundred and fifty-seven million yards last year, and are still increasing.

We are wont to use extravagant language in India, yet writing with a full sense of responsibility I say that never was a more critical Budget introduced than the one which the Finance Minister presented yesterday. The issue was just this : was India to pursue the protective policy which any national Government would follow, or was India to remain in fiscal bondage to Great Britain and the Free Trade con- victions of her Ministers ? And I say again, with a full sense of responsibility, that if the British Cabinet had enforced its will on the Government of India it would have driven a nail deep into the coffin of the British connexion. All my friends tell me of the rising tide of nationalism and separatism in the Indian commercial community. Even amongst those who appreciate the dangers inherent in Mr. Gandhi's chimera of non-violent lawlessness there is a tendency to coquette with him as the only means of moving the Government from its economic passiveness. Refusal to hold out a hand to the greatest national manufacturing industry in this country at such a juncture would have carried the conviction that the economic interests of India would always be subordinate to the fiscal ideas or heresies of Great Britain, and that salvation could be found only in nationalism and independence, however real the perils in the path.

The danger has been avoided, though with ill-grace, by Whitehall. The correspondence shows that, true to tradition, Whitehall tried to force its views on the Government of India in objecting to the increased cotton duties. But Lord Irwin and his colleagues stood firm ; the general revenue duty is to be raised to 15 per cent., and there is to be in addition a protective duty of 5 per cent., with .a minimum of three and a half annas a pound on plain grey goods, on all cotton piecegoods from outside the British Empire. It must be made clear that this is the lowest possible duty which would give the Bombay mills a chance. The Japanese importers have openly boasted that if the existing revenue duty of 11 per cent. were increased by 4 or 5 per cent. they would reduce their prices proportionately forthwith. The poundage minimum on grey goods, which chiefly compete with the Indian product, is effective • I believe it will mean in practice about 21 per cent. The industry breathes again.

Yet you must not be surprised to find a noisy protest against the preference for British goods involved in this programme. It is one of the tragedies of the Indian situation that preference within the Empire, though ideally suited to Indian conditions, is anathema inaranatha. That is the price we have to pay for the folly of Lancashire in using its voting strength over a long series of years to force on the Indian Government the imposition of a- hated excise corres- ponding to the revenue duty on textiles. It has disappeared now ' • the evil done remains m a profound suspicion of British fiscal policy. The British people have to make up their minds to accept some hard things. Vocal India is definitely Protectionist. Within reasonable bounds that is a necessary policy, because only by developing manufacturing industry can an outlet be found for the population in seasons when the rains fail. Accompanied by a judicious system of preferences, there is in this little danger to British trade ; there are few directions in which they ,directly compete. The real danger lies else- where ; it lies in the fact that, in opposing the national economic policy on which India is bent, we destroy the possibility of preference, and drive India for the goods she can- not make herself to the Continental industrialists who are watching this great market. I doubt if Lancashire will be a penny the worse for this higher revenue duty. Given the encouragement of Empire trade; I believe that any develop- ment of Indian industry, bringing increased . buying power,

will add to the absorption of British goods. But there must be no faltering in the path, unpleasant as it may be to Free

Trade doctrinaires. India is going to have a national economic policy based on- discriminating protection. If Great Britain-obstructs this. policy she is going to Make a present of the Indian market to her industrial rivals.' ,