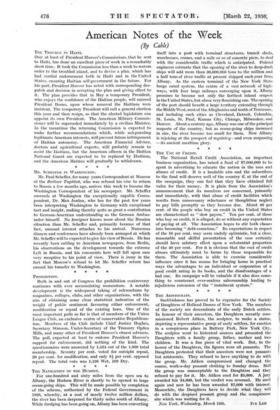 TnE NAVIGATION OF THE HUDSON.

For one-hundred and sixty miles from the open sea to Albany, the Hudson River is shortly to be opened to large ocean-going ships. This will be made possible by completion of the scheme, authorized by the Federal Government in 1926, whereby, at a cost of nearly twelve million dollars, the river has been deepened for thirty miles south of Albany. While dredging has been going on, Albany has been converting itself into a port with terminal structures, transit sheds, warehouses, cranes, and a mile or so of concrete piers, to deal with the considerable traffic which is anticipated. Federal engineers estimate that the opening of the river to deep-draft ships will add more than 30,000,000 tons to the million and a half tons of river traffic at present shipped each year from Albany. As the eastern terminal of the New York State barge canal system, the centre of a vast network of high- ways, with four large railways converging upon it, Albany promises to become not only the farthest inland seaport in the United States, but also a very flourishing one. The opening of the port should benefit a large territory extending through the Middle West, west of the Alleghenies and north of Tennessee, and including such cities as Cleveland, Detroit, Columbia, St. Louis, St. Paul, Kansas City, Chicago, Milwaukee, and Denver. About a century ago, Albany was one of the principal seaports of the country, but as ocean-going ships increased in size, the river became too small for them. Now Albany is rejoicing at the prospect of regaining—and even surpassing —its ancient maritime glory.