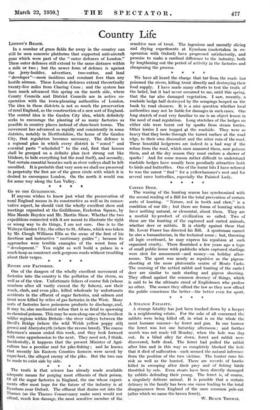 In a number of grass fields far away in the country can still be seen concrete platforms that supported anti-aircraft guns which were part of the " outer defences of London." These outer defences still extend to the same distance within a mile or two ; but the newer form of defence is against the jerry-builder, advertiser, tree-cutter, and land " developer"—more insidious and constant foes than any hostile airman. These London defences extend theoretically twenty-five miles from Charing Cross ; and the system has been much advanced this spring on the north side, where County Councils and District Councils are in active co- operation with the town-planning authorities of London. The idea in these districts is not so much the preservation of rural England, as the construction of a new sort of England. The central idea is the Garden City idea, which definitely seeks to encourage the planting of as many factories as possible in country places instead of slum-beset towns. The movement has advanced so rapidly and consistently in some districts, notably in Hertfordshire, the home of the Garden City, that regulation becomes necessary. The defence is a regional plan in which every district is " zoned " and essential parts " scheduled " to the end, first that houses shall be grouped on a definite plan (not strung out like blinkers, to hide everything but the road itself), and secondly, that certain essential beauties such as river valleys shall be left unsullied. It is probable that very soon we shall see preserved in perpetuity the first arc of the green circle with which it is desired to encompass London. On the north it would run for some way along the Lea Valley.