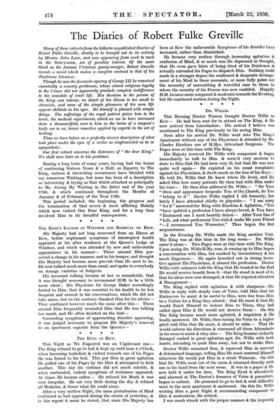 The Diaries of Robert Fulke Greville

Many of these extracts from the hitherto unpublished Diaries of Robert Fulke Greville, shortly to be brought out in its entirety by Messrs. John Lane, and now appearing from week to week in the SPECTATOR, are of peculiar interest. Of the same blood as the famous. Victorian-gossip-monger, Robert Greville reveals a mind which makes a complete contrast to that of his illustrious kinsman.

Though he was the favourite equerry of George III he remained essentially a country gentleman, whose almost religious loyalty to the Crown did not apparently preclude complete indifference to the scandals of court life. His devotion to the person of the King was intense, no detail of his illness is too small to chronicle, and none of the simple pleasures of his sane life appear childish in his eyes. He himself is pleased with simple things. The sufferings of the royal patient grieve him to the heart, the medical experiments, which we see to have increased them a thousandfold, were to him as the turns of a surgeon's knife are to us, heroic remedies applied by experts in the art of healing.

. Thus we have before us a perfectly sincere description of what took place under the eyes of a writer as singleminded as he is sympathetic.

Our first extract concerns the distresses of " the dear King." We shall turn later on to his pastimes.

During a long term of many years, having had the honor of continuing Sixteen Years & a Half, as Equerry to The King, various & interesting occurrences have blended with my numerous Waitings, but none has been of a description so interesting & trying as that which attached so principally to Me, during My Waiting in the fatter end of the year 1788, & which continued throughout the Months of January & of February of the Year 1789.

This period included, the beginning, the progress and the termination of that severe & most afflicting Malady which now visited Our Dear King, and for a long time involved Him in its dreadful consequences.