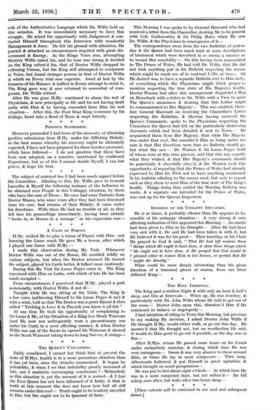 The King past a restless Night & with only an hour & half's sleep, and this at Intervals— When up, He was touchey, & particularly with Dr. John Willis whom He told to get out of the room— Doctor John upon this, threaten'd Him if He continued to behave so improperly— I had intention of riding to Town this Morning, but previous to my making My decision, I asked Doctor John Willis if He thought H.My. would either walk, or go out this day. He answer'd that He thought not, but on recollection He said, it would do Him good to go out if possible, as the day was so fine— After H.Mys. return He passed some hours on his Couch under melancholy coercion, & during which time He was very outrageous— Swore & was very abusive to those around Him, at times He lay " in more composure— Then sung, Afterwards hollowed, & put Himself in great agitation, & which brought on much perspiration—

He was put to bed about eight o'Clock— At which time He was in a more composed state, but not soften'd— He fell asleep soon after, but woke lifter two hours sleep-