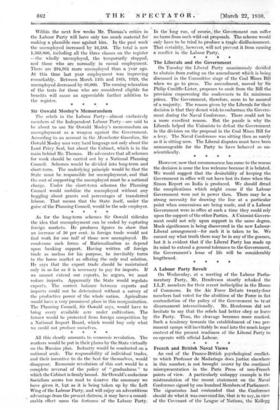 Page 2, 22 March 1930 — All this clearly amounts to economic revolution. The ;vorkers would
Close

All this clearly amounts to economic revolution. The ;vorkers would

be put in their places by the State virtually on the Russian plan. Industry would be conducted on a national scale. The responsibility of individual trades, and their incentive to do the best for themselves, would disappear. Economic revolution of this sort would be a complete reversal of the policy of " gradualness " to which the Cabinet is firmly bound. Sii0swald's audacious Socialism seems too mad to deserve the summary we have given it, but as it is being taken up by the Left Wing of the Labour Party, and will enjoy an adventitious advantage from-the present distress; it may have .a consid- erable effect upon the fortunes of the Labour Party. In the long run, of course, the Government can suffer no harm from such wild-cat proposals. The scheme would only have to be tried to produce a tragic disillusionment. That certainty, however, will not prevent it from causing a 'conflict in the Labour Party. * * . .