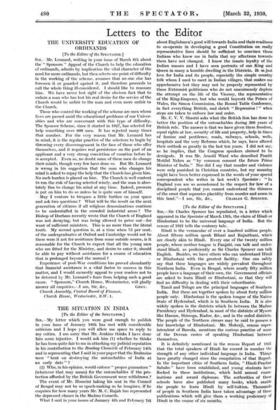 . THE SITUATION IN INDIA

[To the Editor of the SPECTATOR.] -

Srn,—My letter which you were good enough to publish in yoUr issue of January 18th has met with considerable criticism and I hope you will alloW me space to reply to my critics. I am sorry that Mr. Jenkins thinks I have done hini some injustice. I would ask hiria (I) whether he thinks he has been quite fair to me in attacking my judicial reputation in his Contribution to the Bombay Chronicle of February 14th and in representing that I said in your paper that the Brahmins were " 'bent on destroying the untouchables of India at an early date " ?

(2) Who; in his opinion, would enforce " proper guarantees " (whatever that may mean) for the Untoubhables if the pro- tection afforded by the British GoVerru-nent were withdrawn.?

• • The event Of Mr. Husseini taking his seat. in thC. Coitncil of Bengal may not be so 'epoch-Making as he 'imagines, If he enquires for how many years Mr. M. C: Rajah has represented the depressed classes in the Madras Codzicils. ' " '

What I said in your issues of Jaiailary 4th and'February1it

about Englishmen's good will towards India and their readiness to co-operate in developing a good Constitution on really representative lines should be sufficient to convince those Indians who knew me in India that my affections towards them have not changed. I know the innate loyalty of the Indian masses and I have seen portraits of our King and Queen in many a humble dwelling in the Districts. It is just love for India and its people, especially the simple country folk whom I used to meet in Indian villages, that makes-me apprehensive lest they may not be properly represented by those Extremist politicians who do not unanimously deplore the attempt on the life of the Viceroy, the representative of the King-Emperor, but who would boycott the Prince of Wales, the Simon Commission, the Round Table Conference; in fact everything British, and shriek " Repression ! when steps are taken to enforce law and order.

Mr. C. V. V. Shastri asks what the British lion has done to better the position of the untouchables during 200 years of British rule. The answer is that we have -given them freedom, equal rights at law, security of life and property, help in times of famine and pestilence, roads, railways, schools, wells, hospitals and the very Reforms which, he says, have altered their outlook so greatly in the last ten years. I did not say, as he implies, that the Congress speakers claimed to 'be demigods. It was Mr. Arnold Ward who described Pandit Motilal Nehru as " by common consent the future Prime Minister of India." Nor did I say that murder and violence were only punished in Christian countries, but my- meaning might have been better expressed in the words of your special correspondent who writes in last week's Spectator : -4‘ In England you are so accustomed to the respect for-law of a disciplined people that you cannot understand the thinness of the crust that separates placidity from murder and -arson in