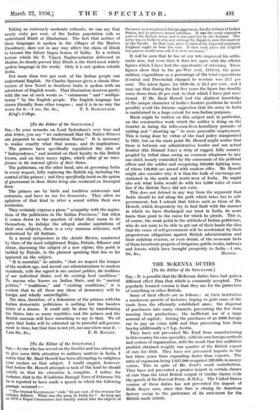 [To the Editor of the SPECTATOR.] SIR, —As one who has

served on the frontier and has attempted to give some little attention to military matters in India, I notice that Mr. Basil Howell has been attempting to enlighten your readers on that subject. I would suggest, however,' that before Mr. Howell attempts a task of this kind he should satisfy us that his education is complete. I notice, for instance, that in the Wimbledon Borough News of February 7th he is reported to have made a speech in which the following Passage occurred :- " The Central Government stole ' 64 per cent.. of the revenue for military defence. What was the army in India for ? As long ago as 1879 a Royal Commission had frankly stated that the objects of the army were to prevent foreign aggression, for the defence of Indian States, and to prevent armed rebellion. It was the most expensive part of the British Army and it was paid for by the Indians. The army was in India to stop any attempt by Jape► to gain the mastery of the Pacific. In that case, since it existed for Imperial purposes, England ought to bear the cost. if that took place the English tax-payers would soon ask if it were necessary."

It will be seen that he has at any rate improved his arith- metic now, but even then it .does not agree with the official figures which I have had the opportunity of obtaining. These figures show that in the pre-War year, 1913-14, the gross military expenditure as a percentage of the total expenditure (Central and Provincial) charged to revenue was 25.7 per cent. The latest figure, for 1929-30, is 25.5 per cent., and I may say that during the last five years the figure has steadily come down from 28 per cent. to that which I have just men- tioned. If Mr. Basil Howell had the slightest knowledge of the unique character of India's frontier problems he would possibly avoid the fatuous suggestion that the army in India is maintained to a large extent for non-Indian purposes.

Much might be written on this subject and, in particular, on the constructive work which the soldier is doing on the frontier in luring the tribesmen from hereditary pursuits of raiding and " shooting up " to more peaceable employment. This is being done by virtue of the road policy inaugurated in 1921, but on the main point Mr. Howell might realize that there is between our administrative border and our actual frontier (the Durand Line) a strip of rugged, hilly country peopled by tribal clans owing no common allegiance to any one chief, loosely controlled by the commands of the political officer and the soldier and comprising 500,000 fighting men, of whom 120,000 are armed with modern rifles. Mr. Howell might also consider why it is that the bulk of our troops are Stationed in the north and north-west of India. He might also ask what India would do with her 3,000 miles of coast line if the British Navy did not exist.

This does not detract in any way from the argument.-that India should be led along the path which takes her to self- government, but. I submit that letters such as those of Mr. Howell, which desperately try to find fault with the manner in which we have discharged our trust in India, do more harm than good to the cause for which he, pleads. This is, of course, the weak point in the attitude of Indian politicians, who do not seem to be able to get out of their heads the idea that the cause of self-government will be accelerated by their preposterous allegations against British administration and their sedulous evasion, or even denial, of the economic facts of those beneficent projects of irrigation, public works, railways and forests which have brought prosperity to India.—I am, Sir, &c.,