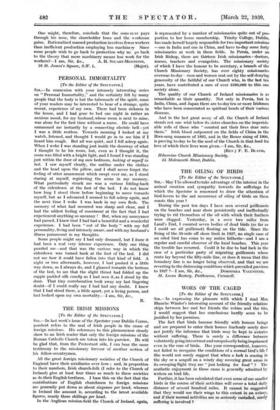 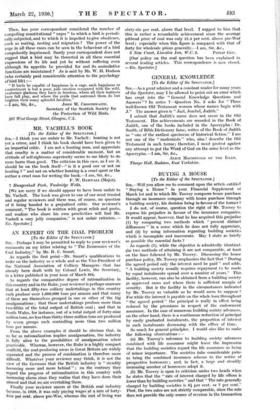 WOES OF THE CAGED • [To the Editor of the

SIR,—In expressing the pleasure with which I read Mrs. Blanche Winder's interesting account of the friendly relation. ships between her and her friends the robins and the tits, I would suggest that her conclusions hardly seem to be justified by her premises.

The fact that birds become friendly with human beings and are prepared to enter their houses fearlessly surely does not justify the inference that birds may be kept in aviaries without suffering. There is surely a difference between voluntarily going into retreat and compulsorily being imprisoned even in the case of birds. Has your correspondent, however, not failed to recognize the conditions of a normal bird's life ? She would not surely suggest that when a lark is soaring in the sky or a seagull on a windy day covering great areas in its swooping flight they arc " just looking for food " ? The aesthetic enjoyment in those cases is generally admitted by writers on bird life.

Further, it has been calculated that even some of our smaller birds in the course of their activities will cover a total daily distance of several hundred miles. It cannot be suggested that they'would use their wings to this extent in an aviary, and if their normal activities are so seriously curtailed, surely suffering is involved ? Then, has your correspondent considered the number of compelling constitutional " urges " to which a bird is periodi-

cally subjected, and to which it is impelled to give obedience. such as mating, nesting and migration ? The power of the

urge.in all these cases can be seen in the behaviour of a bird compulsorily imprisoned. Surely your correspondent does not

although its appetite be provided for and its assimilative functions are Maintained ? As is said by Mr. W. H. Hudson (who certainly paid considerable attention to the psychology of bird life) :—

" If birds be capable of happiness in a cage, such happiness or contentment is but a poor, pale emotion compared with the wild, exuberant-gladness they have in freedom, where all their instincts have full play, and where the perils that surround them do but brighten their many splendid faculties."

Secretary of the Scottish Society for the Protection of Wild Birds. 207 West George Street, Glasgow, C.2.