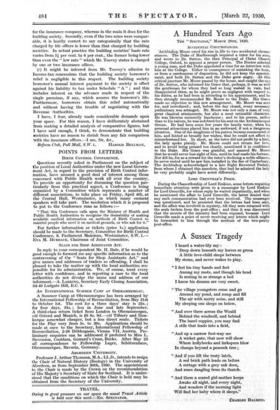 Archbishop Wore owed his' rise inlife to two accidental circum. stances. The Duke of Marlberough required a tutor for his sons, and wrote to Dr. Sutton, the then 'Principal of Christ Church College, Oxford, to appoint a proper person. The Doctor selected a young man, and the Duke appointed a time for an interview with him at the College. Either in consequence of mistaking the hour, or from a carelessness of disposition, he did not keep the appoint- ment, and both Dr. Sutton and the Duke grew angry. -At this critical juncture Mr. Moore passed by the house, and caught the eye of Dr. Sutton, who informed his Grace that, perhaps, -it was as well the gentleman for whom they had so long waited - in vain, had- disappointed them, as he might prove as negligent with respect to his duties, as he had been in attending to his appointment, and he then strongly recommended Mr. Moore to the Duke. His Grace made no objection to this new arrangement. Mr. Moore was sent for, and introduced ; and, before the day closed, every necessary prpliminary_was arranged. Mr. Moore was not only a man of very great classical attainments, but also a most estimable Charicter. He was likewise eminently handsome ; and to his person, rather than to his talents, he was-indebted for his seat on the Archiepiscopal throne. He had been some few years the family tutor, when his personal attractions placed him in an awkward, if not a dangerous situation. One of the daughters of his patron became enamoured of him, and hinted so broadly her wishes, that he could not affect to misunderstand her. In short, as the tutor did not profit by a hint; the lady spoke plainly. Mr. Moore could not return her love, and to avoid being pressed too closely, mentioned it in confidence to the Duke. His Grace was grateful, and assured Mr. Moon that he would never lose sight of him, until he had made his fortune. Nor did he, for as a reward for the tutor's declining a noble alliance, he never rested until he saw him installed in the See of Canterbury, The Archbishop acknowledged to a late Right Reverend Prelate; from whom I obtained this anecdote, that had he admired the lady he very probably might have acted differently.

During the Chancellorship of Lord Erskine, some letters requiring immediate attention were given to a messenger by Lord Erskine for Lord Grenville, for whose reply he waited impatiently, and when he mentioned the affair to Lord Grenville, the latter denied that any such communication had ever been received. The messenger was questioned, and he persisted that the letters had been sent, and the affair was involved in mystery, till they, were returned with the seals broken from the post-office ; and then it was discovered that the secrets of the ministry had been eitposed, because Lord Grenville made a point of never receiving any letters which might be forwarded to him through 'the medium' of the two-penny