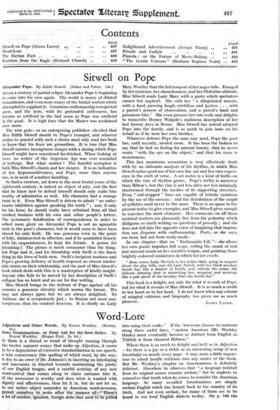 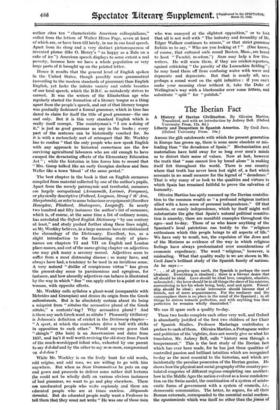 IF there is a thread or trend of thought running through the twelve separate essays that make up Adjectives, it seems to be a deprecation of excessive standardization in our speech, a wise conservancy (the spelling of which word, by the way, is due to an error of Dr. Johnson's in inserting an interloping and inaccurate n) directed towardS maintaining the purity of our English tongue, and a careful scrutiny of any new word-arrival that comes along to claim entrance into it. If the newcomer is worthy and does what is wanted with dignity and effectiveness, then let it in, but do not let us, in our rather abject surrender to American word-invasion, permit ourselves to. ,,write after-the"-;inanner- Of-.=-": There's a lot of careless, ignorant, foreign slobs-that need tirlie into using their conks." If the American chooses to continue along these awful lines, " spoken American (Mr. Weekley thinks) must eventually become as distinct from English as Yiddish is from classical Hebrew."

Where there is so much to delight and hold us in Adjectives —for there is a joy or a tickle or an interesting scrap of new knowledge on nearly every page—it may seem a little ungrac- ious to admit hostile criticism into any notice of the book. But Mr. Weekley's chapter on Americanisms is definitely deficient. Elsewhere he observes that " a language isolated from its original source remains archaic," but he neglects to remember that truth when he comes to consider the American language. So many so-called Americanisms are simply archaic English which has homed back to the country of its birth. And not even archaic, for many of them are to be heard in Our local "English dialects to:day; On -P. 166 the

author cites ten " characteristic American colloquialisms," culled from the letters of Walter Hines Page, seven at least of which are, or have been till lately, in use in our local speech. Apart from its slang and a very distinct picturesqueness of invented phrase (like 0. Henry's " as happy as a Zulu on a cake of ice ") American speech displays to some extent a real poverty; because here we have a whole population or very large parts of it brought up on the printed letter.

Hence it results that the general level of English spoken in the United States, though possibly more grammatical (according to the modern standards of grammar) than English English, yet lacks the infinite variety and subtle beauties of our local speech, which the B.B.C. so mistakenly strives to correct. It was the writers of the Elizabethan age who regularly started the formation of a literary tongue as a thing apart from the people's speech, and out of that literary tongue was gradually fashioned a formal grammar, which in time has dared to claim for itself the title of good grammar—the one and only. But it is this very standard English which is really itself corrupt. The countryman's " I am a-doing of it," is just as good grammar as any in the books ; every part of the sentence can be historically vouched for. So it is with a melancholy sort of retrospect that Mr. Weekley has to confess " that the only people who now speak English with any approach to historical correctness are the few surviving agricultural labourers who are old enough to have escaped the devastating effects of the Elementary Education Act " ; while the historian in him forces him to record that " Mrs. Gamp talked like• an early Georgian duchess and Sam Weller like a town 'blood ' of the same period."

The best chapter in the book is that on English surnames compiled from material collected by one of the author's pupils. Apart from the merely patronymic and territorial, surnames are largely occupational (Arrowsmith, Lorimer, Ferryman), or physically descriptive (Fathead, Longman, Strong "x" th"Arni, Sheepshanks), or refer to some behaviour or equipment (Sweetlove Honeydew, Flinthard, Shakespeare, Langstaff). In nearly two hundred and fifty instances the author's list of surnames, which is, of coarse, at the same time a list of ordinary nouns, has antedated the Oxford English Dictionary "by one century at least," and study pushed further along these lines might, so Mr. Weekley believes, in a large measure have revolutionized the chronology of the Dictionary. Excellent, too, as a slight introduction to the fascinating study of place- names are chapters VI and VII on English and London place-names, and out of the name-giving chapter on adjectives one may pick many a savoury morsel. Adjectives seem to suffer from a most distressing disease ; so many have, and always have had, a tendency to be used in an invidious sense.- A very natural " dislike of conspicuous virtue " has given the present-day sense to parsimonious and egregious, for iustance, and how absurdly adjectives can behave is illustrated by the way in which " fine " can apply either to a point or to a woman, with opposite effects.

Mr. Weekley calls syllabus a ghost-word (comparable with Hebrides and. Grampian) and denies its origin from the Greek sullambanein. But is he absolutely certain about its being a misprint from " sittubas the accusative plural of the Greek sittuba," a contents'-tag ? Why accusative plural ? And is there any such Greek word as sittuba ? Pleasantly Minatory is Johnson's definition of cricket in the Dictionary chapter- " A sport, at which the contenders drive a ball with sticks in opposition to each other." Would anyone guess that " shingle " (the hair) is an Americanism and dates from 1857, and isn't it well worth reviving the old story from Punch of the much-worshipped infant who, exhorted by one parent to say d-d-dad and by the other to say m-m-mam, compromised on d-d-dam ?

While Mr. Weekley is on the lively hunt for odd words, odd origins, and odd uses, we are willing to go with him anywhere. But when as Saxo Grammaticus he puts on cap and gown and proceeds to deliver some rather dull lectures (he could not be wholly dull) on various obvious instances of bad grammar, we want to go and play elsewhere. There are uneducated people who wiite copiously and there am educated people who are at times careless. Aliquando dormitat. But do educated people really want a Professor to tell them that they must not write " He was one of those men who Was annoyed at the slightest opposition," or to hint that all is not well with " The industry and fecundity of Mr. Edgar Wallace continues to amaze," or that strict grammar forbids us to say, " Who are you looking at ? " (One knows, of course, that cultnred owls round Boston, Mass., are heard to hoot " Tu-whit, tu-whom.") Saxo may help a few tiro- writers. He will warn them, if they are cricket-reporters, against criticizing " the paucity of the Lancashire fielding" ; he may head them off from confusing waive with wave and deprecate and depreciate. But that is nearly all, save perhaps a sound word on the split infinitive : if you can't make your meaning clear without it, take the Duke of Wellington's way with a blackmailer over some letters, and substitute " split " for " publish."