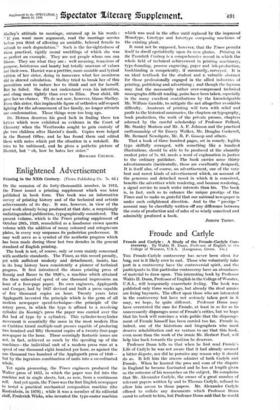 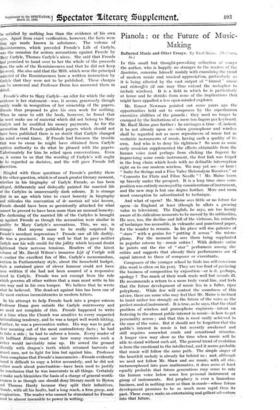 THE Froude-Carlyle controversy has never been silent for long, nor is it likely ever to end. Those who voluntarily take part in a controversy have the controversial spirit, and the participants in this particular controversy have an abundance of material to draw upon. This interesting book by Professor Waldo II. Dunn, Professor of English in the College of Wooster, U.S.A., will temporarily exacerbate feeling. The book was published only three weeks ago, but already the rival armies are fixing bayonets. The effect upon those who are interested in the controversy but have not seriously taken part in it may, we hope, be. quite different. Professor Dunn may have overstated the case for Froude, at least in so far as he unnecessarily disparages some of Froude's critics, but we hope that his book will convince a wide public that the disparage- ment of Fronde himself has been carried too far. Froude is, indeed, one of the historians and biographers who •most deserve rehabilitation and we venture to say that this book, even more than the work of the ironic Mr. Herbert Paul, will help him back towards the position he deserves.

Professor Dunn tells us that when he first read Froude's Life of Carlyle he was not aware that it had already aroused a bitter dispute, nor did he perceive any reason why it should do so. It left him the sincere admirer of both Carlyle and Froude. When he learned the pros and cons of the dispute in England he became fascinated and he has at length given us the outcome of his researches on the subject. He complains that Mr. Alexander Carlyle, the owner of a great-number of relevant papers written by and to Thomas Carlyle, refused to allow him access to those papers. Mr. Alexander Carlyle offered to collate any documents which Professor Dunn cared to submit to hits, but Professor Dunn said that he would be satisfied by nothing less than the evidence of his own eyes. Apart from exact verification, however, the facts long ago made known in substance. The volume of Reminiscences, which preceded Froude's Life of Carlyle, was the occasion for serious accusations against Fronde by Mary Carlyle, Thomas Carlyle's niece. She said that Froude had promised to hand over to her the whole of the proceeds feom the sale of the Reminiscences and that he did not keep his word. She also said that the MSS. which were the principal material of the Reminiscences bore a written instruction by Carlyle that they were not to be published. These charges can be answered and Professor Dunn has answered them in detail.

Froude's offer to Mary Carlyle—an offer for which the only evidence is her statement—was, it seems, generously though rashly mule• in recognition of her ownership of the papers. Froude thus proposed to give his own work for nothing. When he came to edit the book, however, he found that be must make use of material which did not belong to Mary Carlyle and he modified his money payments. As for the accusation that Froude published papers which should not have been published there is no doubt that Carlyle changed his mind several times. If Froude had foreseen the trouble that was to ensue he might have obtained from Carlyle written authority to do what he pleased with the papers- trbfortunately for him he relied upon conversations. Even so, it seems to us that the wording of Carlyle's will ought to be regarded as decisive, and the will gave Froude full discretion.

Mingled with these questions of Froude's probity there is the other question, which is of much greater literary moment, Whether in his biography of Carlyle Froude, as has been alleged, deliberately and disloyally painted the married life of the Carlyles in unnecessarily dark colours. It is strange that in an age which tries to exact honesty in biography and ridicules the convention of de mortuis nil nisi bonum, Froude should have been so persistently attacked for what cannot be proved to have been more than an unusual honesty. The darkening of the married life of the Carlyles is brought up against Froude as though the accusation were similar in quality to Mary Carlyle's accusations. This, we say, is arange. Had anyone cause to be really surprised by Proude's mordant impressions ? Froude saw all life darkly. lie was a pessimist. It may well be that he gave neither Carlyle nor his wife credit for the jollity which beyond doubt lightened their nervous tensions. Readers of the latest volume of Mr. David Wilson's immense Life of Carlyle will *e..lember the excellent fun of Mrs. Carlyle's memorandum, rritten in Parliamentary style, about the household budget. inch a sustained piece of clever humour could not have xen written if she had not been assured of a responsive nood in Carlyle. Froude was not exempt from the rule rhich governs all other writers that a man must write in his )wn way and in his own temper. We believe that he wrote that he believed. The dead-set against him has been one of he most curious inconsistencies in modern letters.

In his attempt to help Froude back into a proper esteem Professor Dunn goes outside the Carlyle controversy and re need not complain of this. Froude happened to write it a time when the Church was sensitive to every suspected rationalizing tendency, and he was a target well worth hitting. ?urther, he was a provocative writer. His way was to pull a ,lear meaning out of the most contradictory facts ; he had :o take a side ; he had to enforce a lesson. Every reader of as brilliant History must see how many enemies such a triter would inevitably raise up. He sowed the ground iberally with dragon's teeth which returned harvests of ;rand men, not to fight for him but against him. Professor )unn complains that Froude's inaccuracies--Froude evidently ound it difficult to copy a letter accurately, and he did not other much about punctuation—have been used to justify he conclusion that he was inaccurate in all things. Certainly o make such blemishes the basis of a charge of general worth- %sness is as though one should deny literary merit to Byron rid. Thomas Hardy because they split their infinitives. 'roude, with all his faults, had a long reach, a firm grasp, and . nagination. The reader who cannot be stimulated by Fronde lust be almost insensible to power in writing.