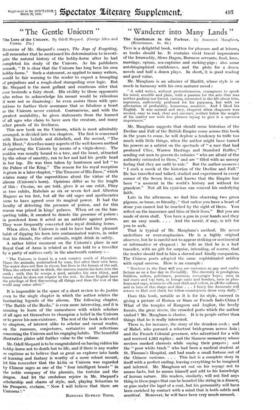 The Lore of the Unicorn. By Odell Shepard. (George Allen and

READERS of Mr. Shepard's essays, The Joys of Forgetting, will remember that he mentioned his determination to investi- gate the natural history of the hobby-horse after he had completed his study of the Unicorn. As his publishers, remark, " It is clear that the Unicorn has long been his own hobby-horse." Such a statement, as applied to many writers, would be fair warning to the reader to expect a trampling of prejudices and a rough-shod stampeding over logic. But Mr. Shepard is the most gallant and courteous rider that ever bestrode a fairy steed. His civility to those opponents who refuse to acknowledge his mount would be ridiculous if were not so disarming : he even assists them with quo- tations to further their assurance that so fabulous a beast as the Unicorn - never existed. Contrariwise, and with the greatest amiability, he gives statements from the learned of all ages who claim to have seen the creature, and many

other proofs of its liveliness.

This new book on the Unicorn, which is most admirably arranged, is divided into ten chapters. The first is concerned with Eastern beliefs and disbeliefs, and the second, " The Holy Mint," describes many aspects of the well-known method of capturing the Unicorn by means of a virgin-decoy. The maiden was usually bound to a tree, and the beast, attracted by the odour of sanctity, ran to her and laid his gentle head in her lap. He was then taken by huntsmen and led " to the Palace of the King." The reason for his royal reception is given in a later chapter, " The Treasure of His Brow," which relates many of the superstitions about the virtue of the alicorn (Unicorn's horn). Opinions differ as to the length of this : Ctesias, we are told, gives it as one cubit, Pliny as two cubits, Rabelais as six or seven feet and Albertus Magnus as ten feet, but all the old sages and apothecaries seem to have agreed over its magical power. It had the faculty of detecting the presence of poison, and for this reason was prized in kings' palaces. When set on the ban- queting table, it sweated to denote the presence of poison : in powdered form it acted as an antidote against poison.

They were frequently converted into royal drinking horns.

When alive, the Unicorn is said to have had the pleasant habit of dipping his horn into contaminated waters, in order that his friends, the other animals, might drink in safety. A rather bitter comment on the Unicorn's place in our Royal Coat of Arms is related as it was told to a traveller by a party of natives early in the nineteenth century :-

" The Unicorn is found in a vast country south of Abyssinia. There the animals, undisturbed by man, live after their own laws. The water does not flow in rivers, but lives in the bosom of the soil. When the others wish to drink, the unicorn inserts his horn into the earth ; with this he scoops a pool, satisfies his own thirst, and leaves what he does not require to the rest. So these English have the privilege of first discovering all things and then the rest of the world may come after."

It is impossible in the space of a short review to do justice even to the single chapter in which the author relates the fascinating legends of the alicorn. The following chapter, "The Battle of the Books," is even more interesting, and it is amazing to learn of the earnestness with which scholars of all ages set themselves to champion a belief in the Unicorn

or to prove his non-existence. The rest of the book is devoted to chapters, of interest alike to scholar and casual reader, on the rumours, conjectures, certainties and reflections concerning the Unicorn and his engaging habits. The beautiful illustrative plates add further value to the volume.

Mr. Odell Shepard is to be congratulated on having ridden his hobby-horse not to death but to life, and if there is any reader so captious as to believe that so great-an explorer into lands,

of learning and fantasy is worthy of a more robust mount, let him remember that the ki-lin or Unicorn was regarded by Chinese sages as one of the " four intelligent beasts " in the noble company of the phoenix, the tortoise and the dragon. And let the credulous rejoice in Mr. Shepard's scholarship and charm of style, and, playing Sebastian to his Prospero, exclaim, " Now I will believe that there are Unicorns 1 "