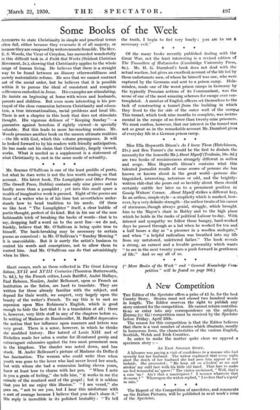 Page 37, 22 March 1930 — Short essays, such as those collected in The Great Literary
Close

Short essays, such as those collected in The Great Literary

Salons, XVII and XVIII Centuries (Thornton Butterworth, 7s. 6d.), by the French critics, Louis Batiffol, Andre Hallays, Paul Reboux, Noziere, Andre Bellessort, upon so French an institution as the Salon, are hard to translate. They are written for those already familiar with the subject, and depend for their worth, we suspect, very largely upon the beauty of the writer's French. To say this is to cast no aspersion upon Miss Robinson's English, which is good enough to hide the fact that it is a translation at all ; there is, however, very little stuff in any of the chapters before us. In writing of Madame de Rambouillet, M. Batiffol deprecates• the notion that her influence upon manners and letters was very great. There is a sense, however, in which he thinks she modified history. Her hatred of Louis XIII and of Richelieu made her salon a centre for ill-natured gosiip and extravagant calumnies against the two most prominent men in the kingdom. The slander was noted down, and has stuck. M. Andre Bellessort's picture of Madame du Deffar d has fascination. The woman who could write thus when youth was gone to the lover who had never loved her much, but with whom she had a connexion lasting eleven years, knew at least how to charm with her pen. " When I note in you a grain of feeling," she tells him, " it works in me the miracle of the mustard seed of the gospel ; but it is seldom that you let me enjoy this illusion." " I am vexed," she goes on, " not to see you, but I bear this misfortune with a sort of courage because I believe that you don't share it." His reply is incredible in its polished brutality.: " TO tell the truth, I begin to feel very lonely : you are to me 4 necessary evil."